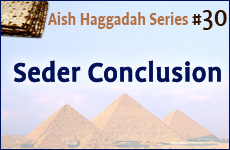 Next Year in Jerusalem!

Next Year in Jerusalem!

The Passover Seder is now completed in accordance with its particular laws, all its ordinances and statutes. Just as we merited to perform it, so may we merit to offer it. O Pure One, Who dwells on high, uplift the congregation (Israel) who cannot be counted. Soon, and with rejoicing, lead the offshoots of the stock that You have planted, redeemed, to Zion. Next year in Jerusalem!

Why is this one of the 15 steps to freedom?

We conclude our Seder with the prayer, "Next Year in Jerusalem." Every synagogue in the world faces Jerusalem. It is the focus of our hopes and aspirations – not merely in a geographic sense, but in a conceptual sense as well. The Talmud says creation began in Jerusalem, and the world radiated outward from this spot. Medieval maps show Jerusalem at the epicenter of Asia, Europe, and Africa. The world flows into this place, and all life's forces resonate here. From here, the whole world is cast into perspective.

The name Jerusalem means "city of peace." Peace, "shalom," is more than the absence of conflict; it is the seamless harmony of humanity genuinely embracing a common vision. Jerusalem is a vision of God in our lives, a metaphor of a perfected world. Jerusalem gives us hope to achieve what we as a people must do, to sanctify this world.

In Egypt, we hadn't yet absorbed this lesson: we were too burnt out from hard work (Exodus 6:9) and had become immersed in the spiritual abyss of Egyptian society. When we finally were redeemed, it happened so quickly and hastily that even then we were unable to grasp its full significance. What this means is that year after year, each successful Seder adds meaning to the original events, and brings us closer to the final redemption.

As the Seder draws to a close, we sense the process of redemption is under way. We shout aloud: "Next Year in Jerusalem!" We're on our way back home.

The Passover Seder is now completed in accordance with its particular laws, all its ordinances and statutes... Next year in Jerusalem!

There are Jews celebrating Passover tonight all over the world – in Moscow, Melbourne, Milwaukee, Paris, Tibet and Tel Aviv. We are all cells which form the body of the Jewish people. How wonderful it is to be Jewish and to see our mission in history.

We are grateful for the opportunity of the Seder. Hopefully we've done it properly and we've lifted ourselves into becoming better people. Look around at your family and friends, and ask yourself, "Have we gotten there? Does everyone understand the beauty and value of being a Jew? Do we appreciate our mission in life?"

Our final prayer is: "Next year in Jerusalem." May we all celebrate Passover together next year, when the Messiah has come and the Jewish people are united in our homeland, in peace and understanding.

It Came to Pass at Midnight

Bring near the Messiah's era, that is neither day nor night. Show, exalted God, that Yours is the day as well as the night. Appoint watchmen for Your city (Jerusalem) all the day and all the night. Brighten as with the light of day, the darkness of the night. It came to pass at midnight.

Why are we singing about midnight?

In Judaism, nighttime represents exile, while daytime is redemption.

This poem explains how redemption always actually occurs at nighttime – at what seems like the darkest moment.

In Egypt, we were slaves one moment, and then at the "stroke of midnight" we were free. The Abarbanel explains that the line is that thin to redemption!

This explains why the Passover Seder is the only Torah mitzvah which must be performed specifically at night.

Who knows 13? I know 13. Thirteen are God's attributes, 12 are the tribes if Israel, 11 are the stars (in Joseph's dream), 10 are the Ten Commandments, 9 are the months of pregnancy, 8 are the days of circumcision, 7 are the days of the week, 6 are the Mishnah sections, 5 are the books of the Torah, 4 are the Matriarchs, 3 are the Patriarchs, 2 are the tablets of the covenant, our God is One, in heaven and on earth.

What is the significance of these 13 categories?

The commentaries explain that these are the merits by which the Jewish people were redeemed from Egypt – and they are listed in order of importance!

For example, we were redeemed because of:

...Then came the Holy One, Blessed be He, and smote the Angel of Death, who slew the slaughterer, who killed the ox, that drank the water, that extinguished the fire, that burned the stick, that beat the dog, that bit the cat, that ate the kid, which my father bought for two zuzim. One little kid, one little kid.

There are many symbolic explanations for this song.

One explanation is that God (the "father") selects a single goat (the Jewish people), who is "purchased with "two coins" – the two Tablets given at Mount Sinai. Then, a succession of oppressors comes to destroy the Jewish people. But in the end, God brings retribution to the oppressors, and redemption to our people.

Another explanation is offered by Rabbi Noson Adler (19th century Germany). He once overheard a conversation between two men who were taking sides in an argument that two other men were having. Rabbi Adler went over to them and said:

If so, then God should not have smote the angel. So how could God have done such a thing?!

The answer, Rabbi Adler explained, is that while it was certainly wrong for the cat to eat the little goat, it was also wrong for the dog to get involved in an outside dispute. It only made things worse. Thus, the dog deserved to get beaten. But the stick had no right getting involved! And so on...

Therefore, at the end of the line, God was justified in punishing the angel, which similarly had no business getting involved in the dispute of others.

The lesson for us? Oftentimes our intervention only fans the flames of strife. If we see an injustice, we do not need to "take the law into our own hands." We should rather seek appropriate channels of retribution. It may spare a long list of incriminations and counterattacks.

The Passover Seder Brought to Life