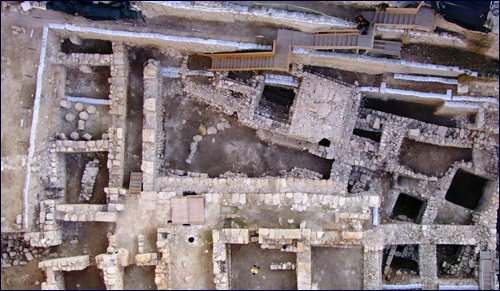 Amazing discoveries that clearly show the Jewish connection to Jerusalem.

The exciting results of archaeological excavations of ancient Jerusalem have been coming forth steadily since the reunification of the city during the 1967 Six-Day War. More recently, the area of the City of David, to the south of the Temple Mount has been yielding amazing discoveries. Some of these were the subject of the City of David’s 16th annual conference, held in Jerusalem in early September. In an era in which the Jewish connection to Jerusalem and the historical nature of the First and Second Temples has been questioned by Palestinians and others, it’s hard to believe that rational people would not be convinced of the Jewish connection by the evidence that is being continuously uncovered.

The most recent discovery to be announced is a stepped stone platform the function of which is not yet definite and may in fact never be known. But an understanding of the context in which it was discovered will explain why this find is so important. The excavations, conducted by the Israel Antiquities Authority with the support of the Ir David Foundation, have already uncovered the public street built by King Herod (Hordos Hamelech, ruled 38-4 BCE). Adjacent to this street was the recently discovered stepped stone platform. Herod was the son of an Edomite named Antipater who had been forcibly converted to Judaism by Yochanan Kohen Gadol (John Hyrcanus), the Maccabean descendent who ruled over the Jews between 134-104 BCE. Herod’s mother was an Arab princess. He was, therefore, not halachically Jewish, but the Romans appointed him as a client king over Judea.

The street we are discussing led from the Siloam Pool, south of the City of David, up to the Triple Gate, the entrance to the Temple on the southern wall. It also led to Robinson’s arch—the remnant of a monumental staircase that led into the Temple from the southeast corner of the Temple Mount. This pavement continued along the outside of the Temple Mount on the western side, crossing what is today the area of the Western Wall, the Kotel, and continued along the side of the outer wall. When touring the Western Wall Tunnels further north one walks along that very same pavement. A parallel main street from the Byzantine period (4-7th centuries CE) has also been excavated. 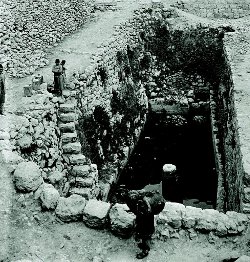 Vintage photograph of the Pool of Siloam

The Bible reports the building of the tunnel of Siloam by King Chizkeyahu when he faced the impending attack of the Assyrians in 701 BCE (2 Kings 20:20, 2 Chronicles 32:2-4, 30; cf. Yeshayahu 22:9-11). The same water source was also known as Gichon (1 Kings 1:33). Some scholars have argued that parts of the water system should be dated even earlier--to the period of King Yehoash (835–801 B.C.E.) In this case, Chizkeyahu may have expanded and adapted the water system. The water works constructed by King Chizkeyahu were intended to provide a continuous and safe water supply to the city in the face of the siege that the Assyrians laid against the city. The Mishnah (Sukkah 3:12) tells us that water from this spring was used for the Simchas Beis Hashoeivah in Second Temple times. The Rabbis, following Yeshayahu’s complaint, did not agree with Chizkeyahu’s action (M. Pesachim 4:9), apparently because it showed lack of faith.

The building of this tunnel, almost 1800 feet long, is recorded in an inscription from the eighth century B.C.E. in which we learn the two groups dug from two opposite directions, meeting in the middle. In the words of the Hebrew Siloam Inscription, now in the Istanbul Archaeology Museum, when they met, “the voice of a man ... called to his counterpart, (for) there was a crack in the rock… the stonecutters struck each man towards his counterpart, ax against ax, and water flowed from the source to the pool for 1,200 cubits.” The text also tells us that the tunnel was 150 feet below the ground level. Excavation at the City of David has completely uncovered the Spring House, the building and step structure that allowed those inside the city walls to descend and draw water that had flowed through the tunnel. 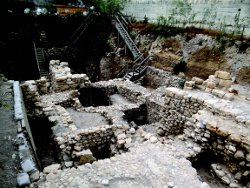 Excavations at the City of David

The excavations have determined that during Second Temple times, from the time of Herod on, the street pavement we have been discussing ran along a route similar to that of the water tunnel, all the way up from the Pool of Siloam to the southwest corner of the Temple Mount. In order to compensate for the difference in height, alternating narrow and wide steps were constructed leading along this path. It is thought that this was the usual route by which pilgrims ascended to the Temple on the Three Festivals. The beautiful staired street was meant to impart a sense of grandeur and the glory of the Temple.

It is along this street of pilgrimage that the stepped platform that has just been announced was found. One could imagine all the speculation about what it might be: a place for making public announcements to those entering the Temple, or even the Even Hato`im, the stone of those who had lost things, the ancient lost and found that the Sages talk about. It is highly doubtful that anyone will ever know exactly what this platform was used for. But its close relationship to the public street leading to the Temple must indicate some important role.

This area is just brimming with archaeological discoveries, so we shouldn’t be surprised that the excavators at the City of David, some of Israel’s leading archaeologists, have uncovered a momentous tunnel under the street we have been discussing. King Herod began to rebuild the Temple in 18 BCE, turning it into one of the architectural wonders of the ancient world. In fact, when the revolt against the Romans broke out in 66 CE, workers were still putting finishing touches on the Temple, despite the fact that Herod was long since dead. In order to build the new structure, Herod greatly enlarged the platform of the Temple Mount. Water used to drain naturally through the Tyropaean Valley to the west of the Temple Mount but its path was blocked by his expansion of the Temple Mount toward the west. For this reason, Herod had to dig a drainage tunnel that led all the way from the Temple Mount down to the area of the Pool of Siloam. This tunnel was dug right underneath the street that we have been discussing. 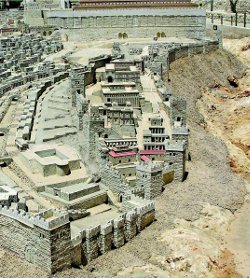 Architectural model of the City of David based on archeological and historical accounts.

On a July visit to the City of David Excavations, I had the chance to walk through a large part of this tunnel and can testify to the amazing engineering skill that must have been required to support its sides and the street above it. In fact, the historian Josephus describes these very tunnels as having served as hiding places for Jews during the Roman destruction of Jerusalem in 70 CE. This is confirmed by the finding of various household goods, such as oil lamps and cooking pots, in this water drainage tunnel. Virtually the entire length of this tunnel has been exposed by the archaeologists working at the City of David.

To grasp fully the amazing results of the work of the excavators one has to visit the large-scale excavation of an urban area immediately across the street from the offices of the Ir David Foundation in what is called the Givati parking lot. Atop the excavation will eventually sit a visitor center for Ir David. I also had the privilege of touring this excavation in July. This massive urban complex was occupied throughout the Greco-Roman period. From the Second Temple era there is evidence of a large residential palace occupied by some important member of the aristocracy. After the destruction of the Temple, there is evidence that the area was occupied by Romans. From the later Byzantine Christian period, specifically during the brief interlude (614-629 CE) in which the Persians conquered Jerusalem, the area was apparently inhabited by Jews. Among the finds was a beautiful gold plaque with a menorah and other Jewish symbols, what may have been a silver buckle for a Torah scroll, and a horde of 264 gold coins. Scholars have speculated that Jews may have returned to this area after the Persian conquest, hoping that it would usher in an era for widespread Jewish resettlement In Jerusalem. Unfortunately, the Persians were quickly dislodged by the Byzantine Christians and the Moslems conquered Israel in 637 CE.

Phenomenal evidence for Jewish Jerusalem in First and Second Temple times has already emerged. We have only been able here to highlight a few of the important finds. Political debate has swirled around these excavations and the planned visitor center but it has not affected the excavators. The archaeologists working here are to be credited with doing their work in a professional scientific manner. But of course, since the Temple Mount did indeed house the Jewish First and Second Temples, and since so much of our history took place in this area of Jerusalem, we can expect that these excavations as well as others being conducted in Jerusalem will continue to yield evidence of Jewish presence in the city and to enlighten us about the ancient history of the Jewish people.

Lawrence H. Schiffman is the Judge Abraham Lieberman Professor of Hebrew and Judaic Studies and Director of the Global Network for Advanced Research in Jewish Studies at New York University.

Biblical Archeology: Prophet and the Earthquake
It Takes A Lot Of Faith To Be An Atheist
How Instagram Brought Back This Nostalgic Soup
What Makes Eli Run?
Comments
MOST POPULAR IN History
Our privacy policy