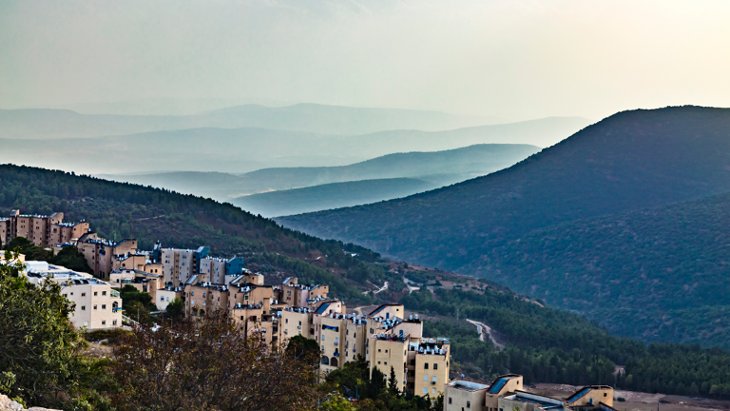 Exploring the hidden spiritual nature of one of Israel’s Four Holy Cities.

Tzfat (or Safed) is known as the City of Air and the world capital of Kabbalah, Jewish mysticism. It's perched atop one of the tallest mountains in the area, affording majestic views of the verdant Galilee. Although the old town is somewhat sleepy today, this was once the center of all Jewish life in the Land of Israel. Testaments to the city’s glorious if turbulent past are found in Tzfat’s cobblestone alleyways, bullet hole-stained British guard posts and most importantly, her countless historic synagogues.

What secrets does Tzfat’s past hold? How did Kabbalah come to develop here and what makes it deserving of its title as the City of Air? 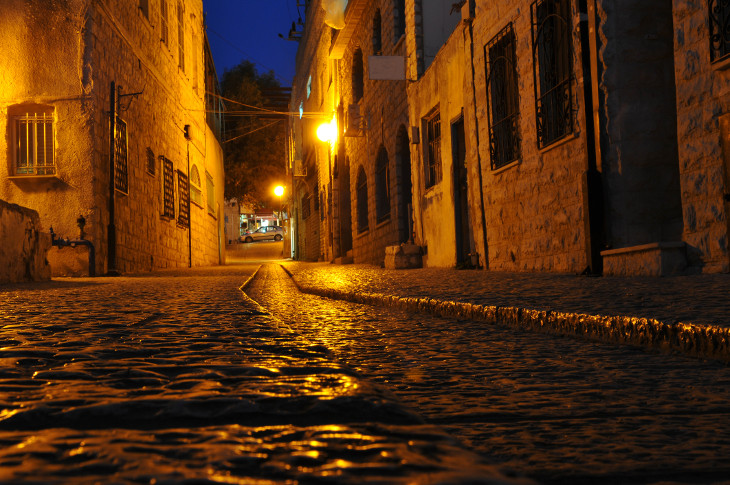 Appropriately for the Kabbalistic city, Tzfat’s origins are shrouded in mystery. A town of that name is mentioned in the Bible, but we don’t know if this refers to our Tzfat. The same goes for the reference to a ‘Sephh’ made by Josephus, the Roman-era Jewish historian. What we do know for certain is that this area was the stomping grounds of Rabbi Shimon bar Yochai, the first rabbi to commit Kabbalistic concepts into writing around the year 160 CE. Rabbi Shimon authored the Zohar, the most fundamental Jewish-mystical text extant. He is buried in Meron, a town on the slope of Mt Meron, Israel’s second-tallest mountain. The location of this mystical thinker’s tomb just across the valley from the nascent city of Tzfat has been said to impact its spiritual development.

We fast-forward an entire millennium. The desperate battles of the First Crusade have been fought and the Christian Kingdom of Jerusalem has been established throughout much of the Land of Israel. Construction of a small fortress on a hill that dominated the Akko-Damascus road began in the year 1102, in order to protect the Crusaders’ primary port city of Akko (Acre) from Seljuk invasion from the east. As the years passed and the Kingdom of Jerusalem moved its capital to Akko, having been driven out of Jerusalem, the fortress grew in size and importance. By the year 1240 it was so large, it supported a mini-economy of Jewish, Christian and Muslim villagers who lived outside its gates, making a living by selling wares to the soldiers manning what was now the citadel. Tzfat had been born. By 1266, the city had grown so large, the conquering Mamelukes made it one of only two regional capitals for the entire Land of Israel.

The 16th century would see Tzfat’s Golden Age. As a result of the Spanish Expulsion, a huge influx of pious and well-educated Jews flooded the city. They brought with them brand new technology in textile development, leading Tzfat to become one of the main Mediterranean producers of felt.

A spiritual renaissance accompanied this economic boom. Tzfat was bursting with sages, Kabbalists and visionaries who bounced ideas off one another with razor-sharp clarity and depth. At sunset each Friday, these mystics would descend into the fields surrounding the city, singing Psalms and poems in order to welcome the Sabbath Queen. One of the members of this group, Rabbi Solomon Alkabetz, penned the well-known poem Lecha Dodi. This custom developed into the Kabbalat Shabbat still practiced by every Jewish community around the world today. 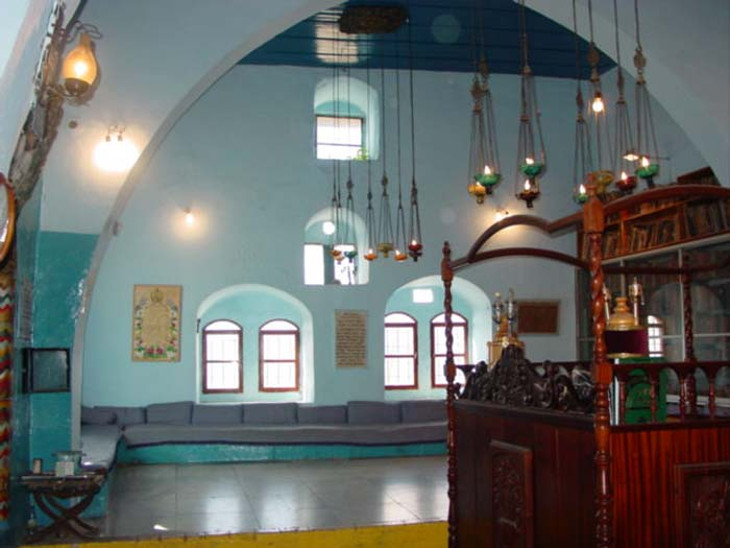 This was only one of four Jewish revolutions to take place in Tzfat at the time. During those same years, Rabbi Joseph Karo completed his work, the Shulchan Aruch, the Code of Jewish Law which still serves today as the authoritative codification of halacha, Jewish law. No future reference to halacha could go without referencing this work.

Additionally, Rabbi Jacob Beirav launched an unsuccessful attempt to restart the Sanhedrin, the Jewish Supreme Court. This move was the first effort in centuries to restore a form of Jewish autonomy and was breathlessly received by many to be a sign of the impending Messianic Redemption. Although the Sanhedrin was not revived, R. Beirav galvanized the Tzfat community to refocus their efforts towards bringing the Messiah.

The final gift imparted by this singularly spiritual society was the development of Lurianic Kabbalah. Rabbi Isaac Luria, known as the Arizal (the Lion), was one of the leaders of this eclectic band of scholars. Although he lived in Tzfat for only two years before passing away at the age of 38, he has forever left his imprint on city. The Arizal worked to elucidate the difficult text of the Zohar and elaborated on its meaning and mysteries. One of the puzzles he clarified was, if God’s Glory is infinite, how can there be ‘room’ for the world to exist? He explained this problem through the concept of Tzimtzum, Divine Contraction. Essentially, God ‘constricts’ Himself in order to leave space for the universe. 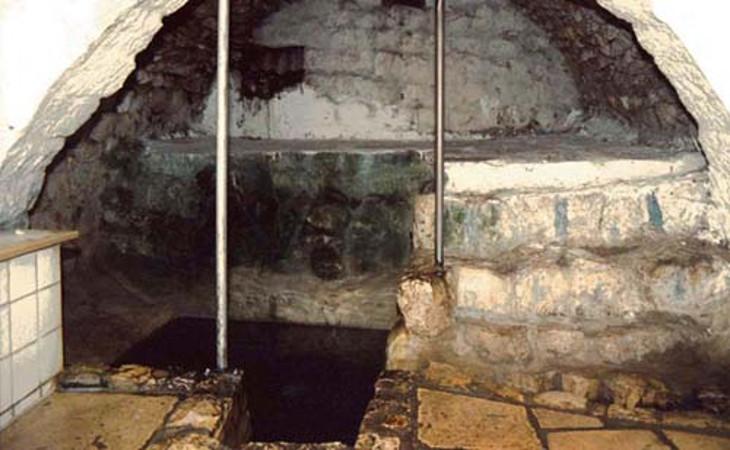 Unfortunately, this Golden Age ended as swiftly as it came and Tzfat went through a series of ups and downs. By the mid-19th century, it was emerging from the tail end of a Druze rebellion and an earthquake that had destroyed much of the city. With the advent of competing nationalistic ambitions in the early 20th century, the frail and impoverished Jewish community of Tzfat found themselves at a strategic disadvantage in the majority-Arab city. In August, 1929, a riot ignited by a false rumor ended with 17 Jews murdered and 150 homes destroyed. The British Mandate forces were powerless to stop the pogrom and had to evacuate the Jewish community into the police house until it ended.

As tensions rose, the British split the city into two, dividing it with a giant staircase that was illuminated by floodlights at night. Curfews were enforced and the British tried encouraging the Jewish community to abandon the town for safer pastures. The Jewish leaders’ response was a unanimous refusal to budge.

With the departure of the British from the Land of Israel in 1948, the Arab forces closed in to capture the encircled Jewish neighborhood. The Jewish population was primarily elderly and religious, with only a handful of Haganah soldiers able to defend it. The fighting was fierce and lasted for weeks, but eventually it appeared that all was lost. By the next morning, the enemy forces were all but sure to breach the Israeli defenses and put an end to centuries of Jewish life in Tzfat. 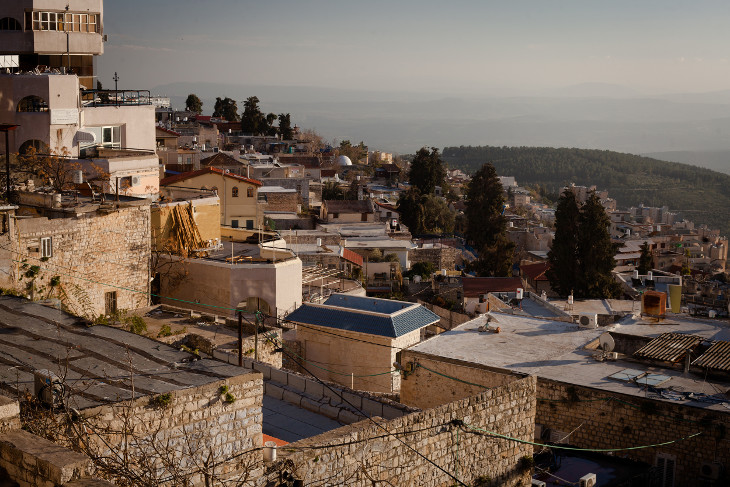 The town of Tzfat

But the final attack never came. Investigating the situation, the Haganah soldiers discovered that the entire city had been abandoned by the Arab army. Apparently, a rumor had spread within their camp that the Israelis were about to use an atomic bomb on the city, and no one wanted to wait around long enough to find out whether the rumor was true or not. Thanks to the tenacity and faith of its residents, Tzfat had been saved.

So what are we to make of this town, this City of Air? By now it is evident that Tzfat serves as a microcosm of all Jewish creativity. The prayers of Lecha Dodi, the pangs of longing for the Messiah, the whisperings of Kabbalistic teachings, the codification of Jewish Law, the unwavering faith, courage and leadership shown during times of trouble; all these individual elements make up part of the broader tapestry of Tzfat’s contributions to Jewish life. Its history comes and goes in spurts, sudden bursts of output and energy, to be followed by breaks in between.

Rabbi Nachman of Breslov, one of the great Hassidic thinkers, noted that music is created from two basic ingredients: air and pressure. The correct synthesis of pressure and air in an instrument will create a beautiful melody, while a random combination of the two will just make noise. The Hebrew word Tzfat comes from the word Litzpot, to foresee. It requires vision and dexterity in order to know when in life to ‘apply pressure’, to act, create and build, and when to draw back. We must remember, the spaces and silences in between musical notes in a song are just as important to its composition as the notes are.

The City of Air encourages us to open our souls to the intangible, creative spirit within us, and learn how to apply it to the practical, physical world.

Massye Kestenbaum was raised in a suburb of New York City. He studied in Yeshivot Hakotel and Netiv Aryeh, both in the Old City of Jerusalem. He served in the IDF's Golani Brigade and has a B.A. in Jewish History and Talmud from Bar Ilan University. He currently resides with his wife in Be'er Sheva.

Reunifying Jerusalem: Remembering Ammunition Hill
G-d Time
Shavuot is The Holiday of Cheesecake and Blintzes
What Does Kosher Mean Literally?
Comments
MOST POPULAR IN Jerusalem and Israel
Our privacy policy