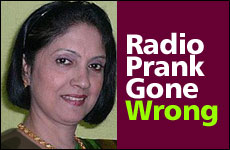 Kate Middleton's nurse and the unpredictable consequences of one’s actions.

Jacintha Saldanha, a 46-year-old nurse, was manning the hospital switchboard and connected them to a second gullible nurse who provided details of Kate's condition.

As recordings of the prank call rocketed around the Internet, she surely felt like a laughing stock and a failure – “traumatized” according to hospital sources.

In the days since there's been a torrent of criticism directed at the DJs, Mel Greig and Michael Christian. Their radio station issued an abject apology and suspended the pair indefinitely. The opprobrium seems logical, but would we still be indignant if somehow Nurse Saldanha had not killed herself? What would we be saying if Mrs. Saldanha was still utterly miserable, embarrassed and depressed, but had stopped short of that dramatic suicidal step?

If Mrs. Saldanha had never had her second, fatal, brush with fame, it's fair to say that most of the world would still be laughing over the improbable joke: a pair of goofy Australians, with terrible English accents, tricking a gullible nurse into divulging medical details on the air. After the hoax, one of the radio hosts said: "This is by far the best prank I've ever been involved in… it's definitely a career highlight."

From reality shows to morning radio, laughing at someone else’s expense is a common guilty pleasure.

Rhys Holleran, CEO of the radio station, defended the whole thing as a joke which never intended such an outcome. ”I think prank calls as a craft in radio have been going for decades... No one could have reasonably foreseen what ended up being an incredibly tragic day.”

Holleran also emphasized that the station had done nothing illegal.

But that’s surely not the point. Whether TV shows with hidden cameras or any comedy aimed at embarrassing others, the media has frequently overstepped its bounds. In its pursuit of sensationalism and big headlines, the media pushes the ethical envelope – and in some instances pushes way too far.

Our decisions in life have to be based on more than just what’s technically legal or on “what we can get away with.”

The Jewish people are known for their great sense of humor, but our Sages long ago realized that the temptation to make fun of others in search of a joke – while may be funny at the time – ultimately cheapens and degrades us.

Humor reveals whether a person is refined or coarse.

The Talmud teaches that humor is one of the essential ways we can know another person's nature. It's a window into their truest essence. It reveals whether a person is refined or coarse, and how sensitive they are to the needs and feelings of others.

Here are four steps to start working on ourselves today.

Further: Despair is not a Jewish concept. Situations often look hopeless, we see no way out – but circumstances can change. As bad as things might be, redemption may be right around the corner. And it often is.

In the Kate Middleton case, there was a confluence of factors: a breakdown in hospital security, a vulnerable nurse, and a media more concerned with cheap “entertainment” than the adverse affect their actions may have on others. The result was a moral failing and, ultimately, disaster.

Those of us striving to be sensitive and caring should foreswear once and for all  indulging in any form of toxic humor.

The Antidote to Bigotry and Hatred

Taking Back Nature: A Reflection
In the Shadow of David and Goliath
Where Do the Laws of Nature Come From?
Saadiah Gaon, Rashi and Maimonides: How Three Rabbis Revolutionized Judaism
Comments