Where Have All the Good Jewish Men Gone? 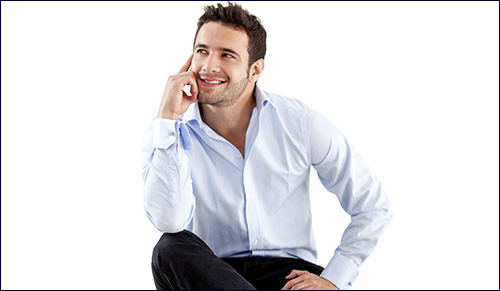 Fear of commitment is exacting a steep price from both men and women.

Every year an equal number of Jewish boys and girls are born – but 20-something years later, there are far more chuppah-minded women than men. The shortage of marriageable Jewish men is well-known, but the mystery of their disappearance remains unsolved for most of us.

One of the reasons may be the “c” word (commitment), which men are supposedly notoriously afraid of. So what are we supposed to do about that?

Western society seems to think the solution is to just give up on commitment and let boys be boys. I thought about that recently when one of my students, after bemoaning her boyfriend’s refusal to commit to a wedding date (despite their three-year relationship), sighed resignedly and said, “Well, I guess, it’s to be expected. After all, he’s a man….”

Is that what a man is, someone from whom one can’t expect much? How does it affect men when we look at them like that? How does it affect women? What are we supposed to make of the fact that for the first time in history, there are more single than married women in the United States, and – astoundingly – one in three babies in the United States is born to an unwed mother? Where are the men in these women’s lives?

Hearts Are Easy to Break

For a woman, who came into the world in the context of a relationship – Eve was created as Adam’s wife – life is often about relationships. Generally, she is not the one schlepped screaming and kicking into commitment. She cares, so she is already there.

But what does she do if wearing her heart on her sleeve is a great way to get it broken? What does she do if her desire for exclusivity, commitment, and a deep relationship are considered inconvenient, quaint and naïve at best? The answer is that she buries them deep inside her, and steps out to negotiate in a man’s world.

And that male world is not a fun place to be. When men are repeatedly told how not much is expected of them, sometimes they sink deep into the quicksand of hedonistic self-serving self-service.

I recently met a 38-year-old man who told me that in his mind the biggest tragedy would be if he had married a woman who just didn’t understand him. To my mind, the biggest tragedy had already happened: here was a man who at 38 didn’t realize that the most important thing in life is not to be understood – it’s to be man enough to understand someone else!

Love requires vulnerability, but it is dangerous to make yourself vulnerable to someone who is focused not on you but on fulfilling his own needs.

Love requires vulnerability, but it is dangerous to make yourself vulnerable to someone who is focused not on you but on fulfilling his own needs. If in his, “I love you, but I can’t commit” she hears him say: “I love me and it’s fun for me to be around you, but I can’t commit because someone even more fun might come along,” she reacts the only possible way. Perhaps not being in a relationship at all is preferable to agonizing over trying to move a brick wall. No one enjoys having his or her most vulnerable self trampled upon.

The Making of a Man

Judaism has a completely different view of what a man is. The Hebrew word for man is gever. Gever shares the same root as the word gevurah, strength. The Mishna asks, “Who is strong? He who is in control of his desires” (Avot 4:1). In Judaism, being a man is about being disciplined, focused, responsible and committed. The Torah tells us, “It is good for man to carry a burden in his youth [i.e., to get married young]” (Lamentations 3:27). Taking care of a family – taking responsibility, being committed to the people in his care, putting their needs first – is what makes a man into a man. While it may not be good for women when men wait until they are 35 to settle down, for men it is disastrous: they may never meet the hero they could have been.

Leonard Sax, in his book Boys Adrift, describes an interesting scenario. Three researchers were sent by the Ford Foundation to observe a classroom in an all-boys school with a male teacher. They critiqued what they felt was an unacceptable portrayal of gender:

The three authors [of the research] condemned the [school]…on the grounds that it strengthened gender stereotypes… One teacher who received particularly severe criticism was a man who dared to speak to his students – all boys – about what it means to be a productive man. The teacher had said:

“We talked about strength, and we talked about self-control and being able to control your emotions and making sacrifices for others. You know, we talked about how if you have a family and you only have enough money for two cheeseburgers, you’re not going to eat…you know you are going to feed your wife and your kids and you wait.”

The researchers censured this teacher and castigated the tendency of other teachers to reinforce traditional gender stereotypes…. They were disappointed that boys “…were being told to be strong men and take care of their wives…. Traditional gender role stereotypes were reinforced and gender was portrayed in an essentialist manner” (Boys Adrift, 203–204).

One can easily see why the image of the man as the strong caretaker and the woman as the one-being-taken-care-of risks creating a patriarchal relationship that puts women and children in the same category. Yet, requiring a man to take responsibility doesn’t have to mean that the woman can’t take care of herself.

Requiring a man to take responsibility doesn’t have to mean that the woman can’t take care of herself.

Obligating the man might be seen as an acknowledgement that if it isn’t safe for her to be vulnerable, a woman might, symbolically, take her heart off her sleeve and hide it behind a stone wall to keep it safe. Where would that leave society?

Jewish law asks man to take responsibility not because women are weak and needy, but because we, as a society, are needy – life is about love, so we have to make it safe to love.

Perhaps today’s accomplished woman can wrestle all the lions and tigers and bears by herself, but when she does, she may not have a lot of room left in her life for vulnerability. When a man is obligated to her, when he is told that he is responsible to “gladden his wife’s heart,” she no longer has to be an undercover agent. She – and he together – get to teach the world about love.

Judaism – which is more into equity than equality – has no problem saying that men and women relate differently to relationships. It also tells us that the voice of love is the one we had better make sure doesn’t get squashed, because without it life becomes a very lonely island.

If we had to find one word to describe the difference between men and women in Jewish law it would be obligation. Men have to pray three times a day, and go out to minyan no matter what the weather. They have to put on tallit and tefillin. They are supposed to learn Torah every spare minute. For a man who takes his religious obligations seriously, life is a pretty obligating affair.

Under the chuppah it is he who gives her a ketuba. Instead of casting him as a reluctant participant in a ceremony designed to rob him of his freedom – the unspoken message of wild bachelor parties held the night before a wedding – Jewish law casts him as the proactive initiator. He commits to her, he promises to support her, he obligates himself to take care of her needs.

Giving her the ketuba under the star-filled sky marries prose to poetry: Love starts with my obligation to you. My responsibility will be the soil from which our love together will flourish.

A version of this article originally appeared in the Jewish Press.

Click here to read Where have All the Good Jewish Women Gone?

The Greatest Gift You Can Give: An Amazing True Story

Confessions of a Reject

Nazi Salute Stirs Controversy in Alabama
Should I Break Up, Get Engaged or Keep Dating?
Time Is Your Precious Commodity
A Constant World in Flux
Comments
MOST POPULAR IN Current Issues
Our privacy policy