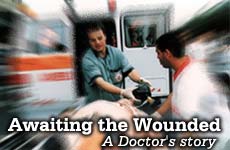 Being in charge of the only Level I trauma center from the Jordan Valley to Beersheba, I have seen indescribable anguish, and hope.

When a human bomb goes off in Jerusalem, I know within seconds. I wear two beepers and a cell phone, even to bed. Nearly always, driving my own car, I can beat the first ambulances to the hospital, even if I'm asleep when the first call comes.

The sirens blare as ambulance after ambulance pulls up in front of the main square of Hadassah University Hospital. I wait outside, with dread in my heart. As the doors swing open, my greatest fear is that one of my own four children or my next-door neighbor's will be lying there among the terror victims, so many of whom are only kids.

Our enemies choose their targets to maim our youngsters. They strike at pizza parlors, school buses, frozen-yogurt kiosks. The medics make their own quick decisions in the field: The worst patients are brought to Hadassah Hospital, the only Level I trauma center from the Jordan Valley to Beersheba. I'm in charge of that unit.

My first job is triage, instantly evaluating which treatment each patient is to receive: being hurried onto the trauma table with a dozen top medical experts surrounding him, wheeled away to surgery or brought to the regular emergency room for care.

I listen to the reports of medics, I look at the patients, and I touch them.

Victims with blast injuries can seem perfect on the outside but may be burning up inside.

My medical training in Israel and the United States, years of experience, intuition and sometimes help from the Almighty -- something we're not embarrassed to talk about in Jerusalem -- help me make these life and death decisions.

The medical challenges are daunting.

Victims with blast injuries can seem perfect on the outside but may be burning up inside. Several weeks ago, I kneeled over a beautiful young woman named Shiri Nagari in the hospital parking lot. I asked her how she was feeling, and she answered that she was okay. But I felt that something was wrong.

She was slowing down. I ordered immediate intubation to create an airway. Some of my colleagues thought we needed to spend time on the patients with more visible wounds. But her chest X-ray confirmed my hunch: a white butterfly on the black background.

The same loud wave of air that smashes your eardrums can compress the air in your lungs and send it to destroy the organs in your abdominal cavity. Three concussive waves do lethal damage when a bomb explodes in an enclosed area.

We rushed Shiri to our trauma operating room, always left empty for emergencies, and opened her up: blood in her chest and abdomen, a liver torn apart. No matter how much blood we pumped in, she couldn't survive.

I'm 52, and like most Israelis I serve in the army too. I have seen my share of tank injuries, unrelenting cancers and traffic accidents.

Shiri's death was the first time I ever cried at losing a patient.

I'm always coping with my own anger that we can't pull off a miracle for each patient.

I dread telling the patient's parents, but that is also part of my job. Even less dire pronouncements are tough. Recently, after a terrorist attack in the open-air market in Jerusalem, I had to inform a victim's wife that we had amputated his leg. His wife flew into a rage. That's an anger I'm familiar with. I'm always coping with my own anger that we can't pull off a miracle for each patient.

Concussive injuries are only part of the damage caused by urban bombings.

We have been treating damage to the brain, lungs, bones and heart caused by nails, bolts and ball bearings packed into the high-velocity bombs.

Adi Hudja, only 14, had more than 40 metal objects in her legs from the suicide bombings on Ben Yehuda Street last December.

She was bleeding uncontrollably from her wounds. On the spot, we came up with the idea of trying a coagulant for hemophiliacs still not approved by the U.S. Food and Drug Administration, certainly not approved for trauma. It costs $10,000 for a small bottle, but it worked.

Six months later, she's coming for therapy three times a week in Hadassah's Mt. Scopus Rehab Center, and she's learning to walk. Next year, maybe she'll be able to go back to school too. She's the same age as one of my daughters.

No matter the sophistication of medical care, speed counts. Most of the thousands of procedures we surgeons in my department do each year are elective, but trauma is different. Our chief trauma nurse, Etti Ben Yaakov, always talks about the "golden hour" we have to save our patients' lives.

The clock is ticking from the obscene sound of the blast. In the trauma center, I am assisted by a remarkable team of doctors, nurses and technicians. Suicide-blast victims almost all need multidisciplinary care.

We need to figure out who's going first: the neurosurgeon, the vascular surgeon, the general surgeon, the orthopedic surgeon, the facial surgeon? Even in the middle of the night, doctors and nurses and technicians and cleaning staff arrive at the hospital without even being called.

Who will do the anesthesia? Hands fly up: Our entire operating room staff is ready for an unscheduled shift.

Every decision I make is informed by my core belief that every patient wants to live. Sometimes this credo forces me to try so-called heroic surgery when everything seems lost.

In October 2000, Shimon Ohana, an 18-year-old border police officer, was declared dead in the field. But I asked the ambulance driver to bring him to the hospital. Some decisions are hard to make in the field. I uncovered him, we opened his chest cavity and began to work. He came back to life but remained in a coma for 17 days.

At last, he woke up.

Shimon is my continued reminder that we can't give up hope.

Today, he is a fully functioning young man who trains dogs and loves computers. He lives in Beersheba, but he often comes to Hadassah Hospital for follow-up care or to encourage our other patients. I can't resist hugging him: He's my continued reminder that we can't give up hope.

The lines of ambulances, inevitably, bring a fair percentage of Arab patients.

We can't tell whether they are perpetrators or victims. Even if we could, it wouldn't matter: Everyone who enters the Hadassah Hospital courtyard is treated equally.

And yes, I have operated on terrorists.

Once, I was awakened at 2 a.m. on the Sabbath to do emergency surgery on a terrorist who had been injured while he was being apprehended. I had seen the grisly results of his bus bombings.

More than any other question, friends and visitors and even patients want to know how I feel using my medical training to save the lives of these mass murderers.

Because I'm a doctor, a believing Jew, a human being, I would never allow a patient to die whom I could save. But this saving of life is more than my medical requirements: It's a mission.

By fixing the holes in their chests and bellies, I'm making a statement that I'm not like those forces of darkness that want to engulf this country in blood.

Do they understand? I haven't the slightest doubt that they do. They thank me. They look at me differently. My people and I are no longer the demons of their ugly propaganda. And they suddenly comprehend what the American women of Hadassah who established our hospital and most of the hospitals and clinics in this land with no regard for race or creed understood 90 years ago.

The Hadassah motto is taken from the prophet Jeremiah who cried for the "healing of my people."

The healing of all peoples is the only way to rescue the future of this region.

This article originally appeared in the Chicago Tribune.

Dedicated in memory of, and to the complete recovery of the victims of the current war.
Burt and Doree Wittenberg
Like What You Read?  Give Jews around the world the chance to experience engaging Jewish wisdom with more articles and videos on Aish. It would make your mother so proud and as a nonprofit organization it's your support that keeps us going. Thanks a ton!

Dr. Avraham Rivkind is head of the department of general surgery and the trauma unit at Hadassah University Hospital in Jerusalem.

A Blast in Israel
It Takes A Lot Of Faith To Be An Atheist
How Instagram Brought Back This Nostalgic Soup
What Makes Eli Run?
Comments
MOST POPULAR IN Israel
Our privacy policy