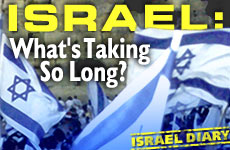 Making Aliyah is no picnic. But the daily challenges are insignificant since I'm playing a vital role in the Jewish people's destined return to the land of Israel.

I am now in the second year of my new life in Israel. (See "Still Crazy: Why We Made Aliyah”) I was afraid to make the drastic move for many years. But after coming here, I am left with only one unanswered question: What took me so long?

On my first day in the country, a stranger looked at my family and said to me, "You will love it here. Israel is a kingdom for children. They are the kings." At the time I politely agreed with him, but now I know how true his words were. In Israel, children are the number one priority.

A friend of mine, who was visiting the country, shared his first Israel banking experience. It was a few days before Passover and he was waiting a very long time in line, sensing the mounting frustration all around him. It was finally his turn. The bank teller, a big burly man, asked him to wait for one more moment. The teller got up from behind his desk, and went over to one of the children waiting in line. He bent down and began to playfully sing Ma Nishtana to the child, trying to teach him a few lines.

I believe the reason for Israel's focus on children is because the Jewish people are fixated on the future. And of course, the children are the future. We are often characterized as a people with a strong connection to the past, with a rich and colorful (and in many cases turbulent and traumatic) history. But our past is only the backdrop, the frame of reference, for where we are going. And it is the children who will take us there.

Israel is the best place on earth to truly sense the connection between the past, present and future. Perhaps because of ongoing conflict, and the awareness of the preciousness of life, most people are keenly aware of the importance of children. I believe that my children are better off here and will have a much better quality of life than they would if they still lived in Canada.

Israel is a country made out of one big family.

Last week my family went for an overnight vacation in the North. In the morning we made a reservation at a bed and breakfast, and told the woman on the phone that we would be arriving in a few hours. Having a great time, we lost track of time and forgot to call to say we would be delayed. In the late afternoon we called to tell her that we would still be arriving, but later. I felt like I called my mother. "You never gave me your name or phone number. I was worried about you, and I couldn't contact you. Is everything okay? I'm sorry but I'm a Yiddeshe Mama, and it's my job to worry about people." Israel is not a country with 5 million citizens; it's a country made out of one big family.

Sometimes I wonder if I am just experiencing a "Honeymoon period." Perhaps I am just so ecstatic at having made my move that I am not objective. I decided to speak to some native Israelis. Overwhelmingly, people felt that it was important to be here. One person told me that he had lived in a major American city for 2 years, and that he had a very easy life there. He was making a lot of money, and it came to him easily. I asked him why he returned. He told me that he did it for his children. "In America, there is a tremendous amount of money. Unfortunately, that's just about all there is."

Life in Israel is definitely no picnic. Almost every aspect of life here is more difficult, and takes more effort. But "according to the effort, is the reward." Life here is so full of meaning.

People often focus on the shortcomings of the Land of Israel. I try to remind myself that we are in the midst of a process. We are trying to build (rebuild) our nation. The fact that we are even alive today is miraculous. We should be thankful for that. The fact that we have another chance at building a national homeland is an opportunity that the Jewish people cannot pass up. It's an opportunity that I personally cannot pass up.

The daily challenges I face are insignificant when I consider that I am playing a vital role in the Jewish people's destined return to our land. I may not be a maverick politician, a five-star general, the CEO of a large Israeli company, nor a respected Rabbi. I am a simple Jew, who walks the face of this country, trying to pay my bills and support my family. But, in so doing, I believe, I am having a tremendous impact. I am consuming goods, thereby adding to the economics of the country. My four children will make the equivalent of a fifth of a classroom. My taxes, (which will turn out to be much more than any Israeli Bonds I could dream of donating) will help pay for roads, parks, and infrastructure.

How can we turn away from this holy land when it is relatively so accessible to us now?

The facts speak for themselves, but they are not enough to move us to truly appreciate the opportunity at hand. It must be experienced to be fully internalized.

The current situation in the country is tenuous. Watching CNN gives the impression that we are living in a war zone. CNN, fortunately, is not reality. Life goes on normally. My wife continues to go for her evening speed walk with her friends. My children continue to play in the streets and at the park. And I continue to make my daily commute across the country.

If we leave here for a "safer place," what will become of our land?

Having said this, the violence always has the potential of spinning out of control, and affecting the lives of all of us. But if we leave here for a "safer place," what will become of our land? How safe will we really be anywhere else? If we believe in Divine protection, then surely the place we will merit it the most is in our Homeland. In fact, the place one feels it most is right here. For all the trouble we face, one must remember that we are 5 million people surrounded by 150 million not-so-friendly neighbors. For "some reason" these neighbors have not thrown us into the sea. Try as one might, there is really no logical explanation for this, other than Divine Protection. And it is only here, in Israel, where one can feel this palpable presence on an ongoing basis.

Israel is where the Jewish people belong, and where we will eventually all end up. I hope it happens soon. When that time comes, the Jewish people will have clarity. We will understand our history, we will truly appreciate our role in the world, and we will be happy to be finally living together as one re-unified family in Israel, at home. The only question we will have will be: What took us so long?

Sol Jakubowicz, along with his wife, Fran, and their children, made Aliyah in 1999 from Toronto, Canada. Sol works in Ra'anana as a Knowledge Manager in Hi Tech and lives in Ramat Beit Shemesh.

Dear Citizen of Gaza
The Blue Beyond
Great Place to Live
Is Eating Supposed To Be Spiritual?
Comments
MOST POPULAR IN Israel
Our privacy policy