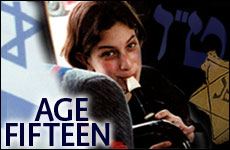 Fifteen is the number that conceals God's name, and is the mysterious turning point for three generations of one family.

Most Jewish teenagers growing up in Australia during the 1960s were, like me, children of concentration camp survivors. Our parents were involved in owning small businesses or were employed. There was hardly a professional among them. At birth, we lacked even a single grandparent in most cases, and almost all of us were named after family members who perished at the hands of the Nazis.

It was clear that we were "everything" to our parents, and no one needed to tell us why. Top of their priorities list was ensuring that we gained the best possible education. Little wonder that several of the largest and most successful Jewish schools in the world were started in Melbourne in the years right after World War II. And the community's interest in things Israeli was unlimited -- the occasional Israeli film and Israeli visitor to Australia's distant shores were memorable events.

The rising tension leading up to the Six Day War left an indelible mark on me.

The Six Day War happened when I was 15. The weeks of rising tension leading up to it left an indelible mark on me: the grainy television images of Egyptian and Syrian troops on the march; Nasser's strident speeches and unilateral blockade of the sea lanes to Eilat; the massing of Egyptian forces on Israel's Sinai border and of the Syrians on the Golan frontier; U Thant's disgraceful capitulation in removing UN peace-keeping forces from Sinai precisely when they were most needed. And the blood-curdling threats of one after another of the Arab dictators and monarchs: "The existence of Israel is an error which must be rectified... This is our opportunity to erase the ignominy which has been with us since 1948... Our goal is clear -- to wipe Israel off the map."

Fifteen marked a turning point in my life. A few months after Israel's stunning defeat of the forces bent (once again) on the liquidation of the Jews, I enrolled for the first time in a Jewish day-school. My ideas about being a Jew in the world, about history and how it affects our lives, about the Holocaust and the chain of Jewish life, began taking grown-up shape.

My mother grew up near Lodz in a town located close enough to the Polish/German frontier to have been overrun by Nazi forces on the first day of the war. Among the men rounded up by the invaders on that September day was her father, the grandfather whose name I was given. As a father myself, I have to breathe deeply in calling to mind the image of my mother throwing herself at the feet of a German soldier, begging, screaming for her father's life to be spared.

On the day the Nazis marched into Poland and began the process of destroying a world, trampling a culture into the mud, murdering Jews by the millions, my mother had just turned 15.

My awareness of my parents' lives begins, in a certain sense, with the end of the war: their four or five years as displaced persons in post-war Germany, their long journey to Australia as a young couple with no English, no marketable skills and no roots beyond their few personal ties and their very Jewish sense of community.

An unexpected photograph changed this for me a few years ago.

I have a cousin, a kibbutznik, the daughter of my father's oldest brother. She was brought to Tel Aviv in the 1930s as a baby by her parents who fled pre-war Galicia, and has lived her life in Israel. Returning as a tourist to her roots, she traveled to Krakow in 2000, and via a chain of circumstances ended up in possession of four photocopied pages which she shared with me. These were Nazi documents -- census forms which the Germans required the Jews in the Krakow ghetto to complete prior to dispatching them to the death camps.

The first page had been completed in the distinctive handwriting of my father, of blessed memory. A small snapshot attached to the form showed him as I had never seen before: virile, handsome, young. Two other pages were the census forms of two of my father's sisters. Their names were known to me from a family tree I had put together years earlier with my father's help, but until that moment they were nothing more than names. Now I gazed at the portraits of two vibrant young women.

My oldest daughter, Malki, had just completed a family-roots project at school and I knew she would be interested. A glance at the pages and she said exactly what I had been thinking: Malki bore a striking resemblance to my father's beautiful sister Feige.

Unlike my parents, Feige did not survive the Nazi murder machine. Whatever promise her life contained, whatever talents she was developing, whatever gifts she was planning to give the world -- all these were overturned by a massive act of violent, barbaric hatred.

Some months after we gazed on those extraordinary pictures for the first time, Malki sat down and quietly (without telling us) composed the words and music of an infectiously upbeat song: "You live, breathe and move - that's a great start!... You'd better start dancing now!"

Living in the land promised to the Jewish people was a source of deep contentment to this granddaughter of Holocaust survivors. The discovery of Feige's picture enabled Malki, I think, to gain a strengthened sense of her personal role as a link in an ancient chain.

Arafat's intifada war against Israel's civilian population broke out around the time we received those precious pages. From the diary she kept, it's evident that the near-daily toll of injuries and deaths weighed heavily on Malki's mind. She writes of having to leave her classroom to weep in privacy upon learning of another terror attack… and another and another. We, her parents and siblings, were unaware of the depth of her empathy for the victims of the war raging in her precious land. The turmoil and pain, to Malki, were deeply personal. Though born in Australia, she had lived in Jerusalem since age two. She felt deeply connected to Jewish history.

In August 2001, my daughter and her friend Michal interrupted the activities of a busy summer vacation day to grab lunch in a crowded Jerusalem restaurant, Sbarro.

If she had noticed the man with a guitar case on his back striding through the unguarded door and positioning himself next to the counter where she was engrossed in tapping out a text message on her cell phone, would Malki have recognized the hatred, the barbaric ecstasy, on his face before he exploded?

Michal and her friend were buried side by side, forever, on a hill in Jerusalem.

Malki and Michal were buried the next day. The closest of friends since early childhood, they lie side by side, forever, on a hill near the entrance to Jerusalem.

Her diary is full of questions: How can such terrible things happen to our people? Why is our love for the Land of Israel not better understood by outsiders? What kind of Divine plan calls for teenagers to be injured and killed by people for whom we hold no hatred at all? How can such intense hatred even exist?

The unbearable question marks left behind by my daughter scream at me every day.

Jewish life, viewed from a distance, is an astonishing saga of tragedy, achievement, grandeur, destruction and greatness, played out over millennia. There is a risk we lose this perspective when we are the individuals living it.

At Purim, we feast, we drink, we ceremoniously deliver gifts, we celebrate with those we love and like. But the narrative at the heart of this festival is of a close brush with tragedy: the Jewish victory over a genocidal conspiracy by murderous Jew-haters.

Here in Jerusalem, a day later than almost everywhere else in the world, Purim is marked on the 15th day of Adar. Jewish calendar dates are written using a simple alphanumeric code: alef is one, bet is two and so on. But longstanding tradition is to avoid the straightforward way of writing the number 15. You would expect it to be yud-heh (lit: ten-five); however these two letters happen to form the first half of God's name and are accorded special treatment and respect.

Accordingly, 15 is written as tet-vav: nine-six. God's Name, as it were, is hidden within the number 15.

Purim is odd in another way: the name of God is completely absent from Megillat Esther. Does this mean the victory of the Jews over their oppressor happened without His involvement? Jewish tradition answers with a firm 'no'. God's role was crucial, but our ability to make sense of how and why He acts is limited, inadequate.

Those of us raised in the shadow of the Holocaust, and who have experienced the tragedy of a child's death by hatred, struggle to understand the nature of the Divine role in our lives as individuals and as a people. There are times, according to Jewish wisdom, when you need to know that God's hand is at work even when the evidence is difficult to see, even when there are more questions than answers.