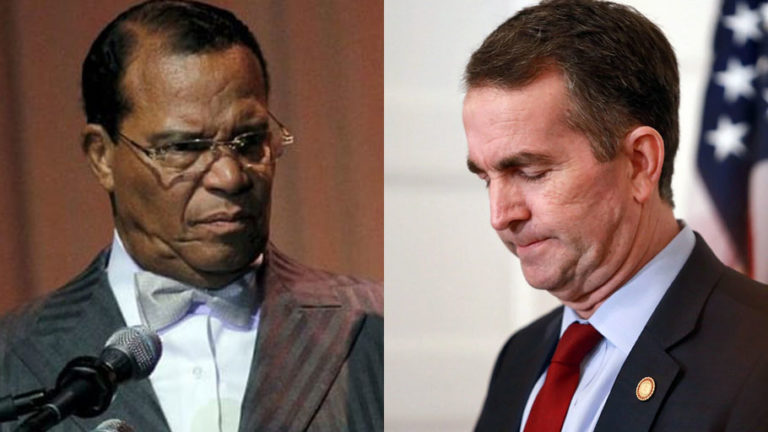 Why does racism, even from decades ago, end careers, but blatant anti-Semitism gets a pass?

Why is racism the prejudice that is completely unforgivable, even if it happened decades ago, yet active anti-Semitism a la Farrakhan and his hate mongering ilk is not only tolerated but even embraced by some nationally recognized leaders?

We have witnessed the fall of numerous public officials and personalities over the slightest whiff of bigotry and racism (Roseanne Barr, Megyn Kelly, Gov. Ralph Northam and the blackface fiasco just to name a few).

One might think that these are positive indicators of contemporary abhorrence of bigotry, a societal awakening to the horror of prejudices which just a generation ago led to the Holocaust. But why hasn’t society’s heightened sensitivity to racism carried over to the most blatant expressions of anti-Semitism?

While racism forcefully ends careers, anti-Semitism doesn’t seem to endanger Nation of Islam Minister Louis Farrakhan or those who lovingly embrace him. And one does not need to go back to 30-year-old undergraduate journals to find examples of his anti-Semitism; as recently as a few weeks ago Farrakhan gleefully repeated his ongoing description of Jews as “termites.”

Here’s a recent sampling of the great body of hateful comments Farrakhan has made about the Jewish people (and others) over the years. “Jews were responsible for all of this filth and degenerate behavior that Hollywood is putting out, turning men into women and women into men…White folks are going down. And Satan is going down. And Farrakhan, by God’s grace, has pulled a cover off of that Satanic Jew, and I’m here to say your time is up, your world is through. You good Jews better separate because the satanic ones will take you to hell with them because that’s where they are headed.”

The response? Rep. Maxine Waters (D-Calif.) is seen on video recently embracing the hate preacher. Waters is famous for consistently pointing with disdain to countless others who she accuses of bigotry and racism. Obviously anti-Semitism doesn’t seem to count.

Tamika Mallory, co-President of the 2019 Women’s March, was confronted by The View co-host Meghan McCain over her friendship with Farrakhan. McCain decided to confront Mallory about support she and other members of the Women’s March have given to Farrakhan in the past and asked flatly if they condemn his statements. Despite McCain’s pressing for clarification, Mallory would not say she specifically condemned the statements from Farrakhan. What she did do, however, is say that she’d rather not be judged through the lens of a male, demonstrating that for her gender racism, attributing to all men the inability to judge fairly, is fine.

Mallory was proud to post a photo of herself with Farrakhan on Instagram that was captioned “Thank God this man is still alive and doing well. He is definitely the GOAT- the Greatest of All Time because of what he’s done in Black communities.”

Prominent activists such as Linda Sarsour and Melissa Harris-Perry have promoted the idea that racism is far worse than anti-Semitism – and anti-Semitism isn’t racism. Remarkable that they have chosen to remain ignorant of the most powerful lesson of the 20th century. It is true that for more than a millennium anti-Semitism was primarily identified with religious hatred. Jews were the Christ killers. It was Jewish faith that warranted the Crusades and their persecution. But Hitler gave anti-Semitism new meaning. Obsessed with race, Hitler did not single out religious Jews; he condemned to death the secular, the nonreligious, the converted-to-Christianity Jews solely on the basis of parentage going back numerous generations. Anti-Semitism was reborn as vicious racism. Although Judaism is a religion, not a race – someone can convert to Judaism but blackface can never make one a black – modern anti-Semitism is decidedly racist, singling out Jews whatever their faith or religious practice.

If contemporary culture is so finely attuned to the sin of racism it must be based on respect for the dignity of all human kind, blacks and whites, men and women, and Jews as well.

That was the gist of the federal ruling by U.S. Magistrate Mark Hornsby in a civil case filed by football coach Joshua Bonadona against his Baptist alma mater, Louisiana College. Bonadona says the school’s president, Rick Brewer, refused to hire him for an assistant coaching position because of what Brewer called his “Jewish blood.” Hornsby wrote in court filings that Jews deserve the protection afforded to racial and ethnic groups by Title VII of the 1964 Civil Rights Act, which specifically deals with employment. He said that anti-Semitism in the United States historically was often not based on an individual’s religious belief but on the fact that he or she had Jewish roots. “Jewish citizens have been excluded from certain clubs or neighborhoods, and they have been denied jobs and other opportunities based on the fact that they were Jewish, with no particular concern as to a given individual’s religious leanings,” the judge wrote.

So too the U.S. Holocaust Memorial Museum recognizes anti-Semitism as racism and as “prejudice against or hatred of Jews based on false biological theories.”

The notion that anti-Semitism can be divorced from racism is, simply put, both anti-Semitic and racist. If contemporary culture is so finely attuned to the sin of racism it must be based on respect for the dignity of all human kind and the divine worth of all those created in the Almighty’s image. That goes for blacks as well as whites, women as well as men, and yes – Jews as well as those of all races and faiths. Cherry picking victims for whom to fight while ignoring and at the same time vilifying others is nothing less than hypocrisy masquerading as righteousness.

Under Siege in Baltimore

Aging Solutions: Is There a Problem?
Saadiah Gaon, Rashi and Maimonides: How Three Rabbis Revolutionized Judaism
King Sennacherib and the Siege of Lachish
Three Small and Easy Changes to Add Positivity in Your Home
Comments
MOST POPULAR IN Current Issues
Our privacy policy
Aish.com Is Looking for Great Writers