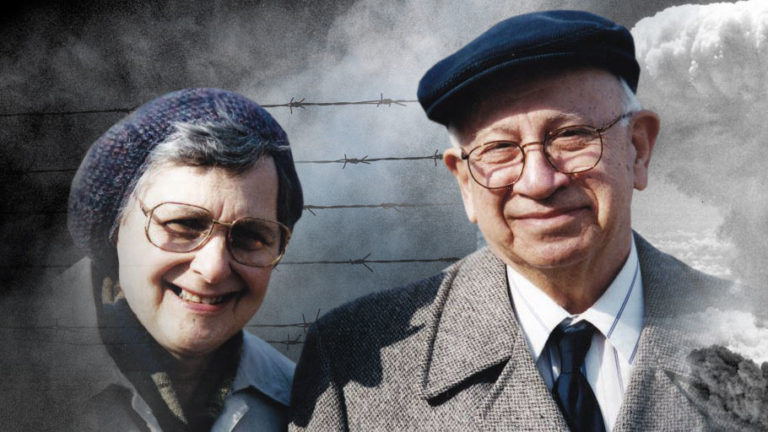 Through faith and courage, John and Sonja Franken’s love was meant to be.

John and Sonja Franken were two unlikely survivors of World War II. Sonja, a Dutch Jew from the Netherlands, survived the concentrations camps of Nazi Europe, including Auschwitz. She faced death in the gas chambers three times and miraculously survived. John, a Dutch-Indonesian Jew born in the former Dutch East Indies, was a prisoner of war in Japan and was working as a slave laborer in Nagasaki when the Americans dropped the atomic bomb there. He, too, survived.

They both suffered unimaginable cruelty on opposite sides of the world in the most extraordinary of circumstances and found everlasting love, against all odds. They would tell you it was bashert, meant to be.

Sonja was raised in a traditional Jewish home where the Sabbath, holidays and laws of the Torah were observed with the greatest joy, devotion and respect. Her father, Abraham, was a kosher butcher and her mother, Mietje, stayed home to raise the children and manage the household. Sonja said, “We were poor, but we were happy.” 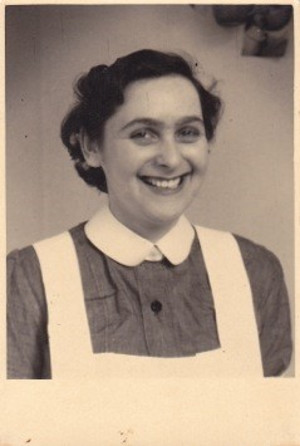 Sonja in her nurse uniform

That happy childhood was turned upside down at age 15 when she and her family were taken from their home by the Nazis to Camp Vught, a transit camp in the southern part of the Netherlands. This was the first of 11 concentration camps she endured.

Upon arrival at Vught, Sonja was forced apart from her parents, her two brothers and the eldest of her three sisters, not knowing where they were being taken to. Sadly, she was never to see them again. She found out after the war that they were all taken to Sobibor where they were immediately exterminated.

Sonja and her two remaining sisters, Ro and Ali, were put to forced labor working in the radio assembly plant for Phillips Electronics. During her time in the camps, Sonja was quickly transformed from a shy, young girl into a bold and brave young woman when she risked her life to save the lives of identical twins who were destined for the evils of Dr. Mengele. She also saved her older sister’s life while on a death march through the mountains of Czechoslovakia in one of the coldest winters they’d had in over a hundred years. Unable to withstand the cold, starvation and exhaustion, her older sister Ro was ready to give up and die. Sonja would not allow it. She saved her sister’s life by pulling her sister onto her back and carrying her the rest of the way.

The war ended for Sonja in May 1945 when her camp was liberated by the Swedish Red Cross. She and her sisters were taken to Sweden where they recuperated for a year. Sonja then went back to the Netherlands where she worked in Amsterdam for a Jewish nursing home for the sick and elderly called the Joodse Invalide. Sonja longed to find her true love and have a family.

John was born on April 10, 1922, in the former Dutch East Indies, now known as Indonesia. His parents, Rosette and Leopold Franken, were Dutch Jews from Amsterdam who moved to the Dutch East Indies for a better quality of life as many Dutch people did at the time. 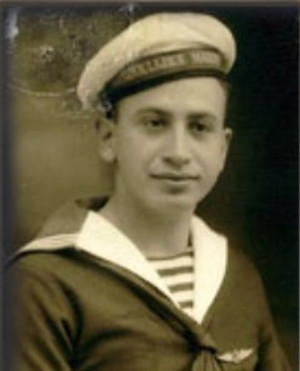 At 18, John was drafted into the Dutch Navy Air Force and while still in boot camp was captured by the Japanese to become a prisoner of War. He was first taken to a prison camp in Indonesia where he experienced torture and starvation and witnessed the murder of his fellow POW’s.

What haunted him the most into his old age was remembering the sounds of the cries for help from the young school girls who were kidnapped off the streets on their way to school and brought to prison camps where they were forced into sexual slavery. John remembered the terrible feeling of powerlessness, unable to help these innocent young girls who became known as the Comfort Girls.

John was taken to Nagasaki where he worked in the shipyards as a slave laborer. Three months before the end of the war, John transferred to work in the coalmines. As a result, he was hundreds of meters underground when the bomb fell on Nagasaki. It saved his life. He would tell you that it was bashert, meant to be.

After the war, John immigrated to Montreal Canada for a job as an aircraft mechanic with Canadair and lived the remainder of his life as a proud Canadian.

John and Sonja were introduced by correspondence through a mutual friend and fell in love by writing letters and exchanging photos between Montreal and Amsterdam. Their daughter, Roslyn, found all the love letters after Sonja passed away and translated them all into English. She includes excerpts from their beautiful love letters in her book, Meant to Be: A True Story of Might, Miracles and Triumph of the Human Spirit, that tells the unforgettable story about her parents.

In 1983 at age 56, Sonja was diagnosed with a very rare form of cancer. The doctors told her she should expect to live for only two more years. She told the surgeon, “You see this number on my arm from Auschwitz? Hitler didn’t get me, my cancer won’t get me. I have too much to live for.”

With that same fighting attitude that got her through the war, she defied every textbook case of her cancer her doctors had ever seen. She lived for another remarkable 21 years. 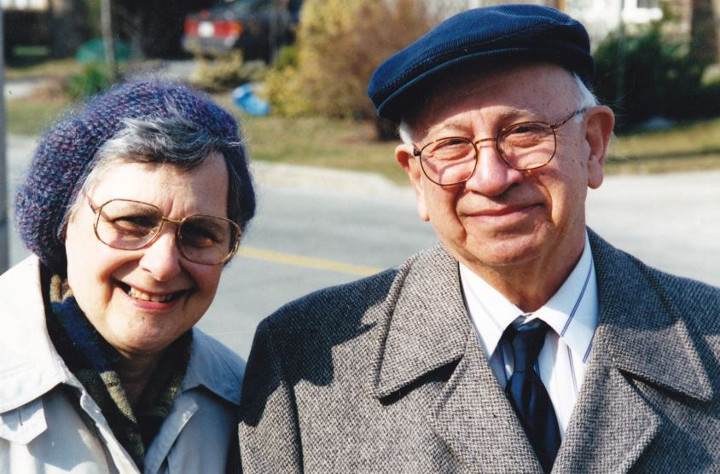 At 67, John suffered a massive heart attack and underwent quintuple bypass surgery. He was told that if he lived another 15 years he’d be doing well. He lived for another 27 years. When he passed away at 94 on June 15, 2016, he was recognized as the last Canadian POW Nagasaki atomic bomb survivor. Roslyn saw how they faced their life-threatening health issues with the same faith and fortitude that got them through the war. 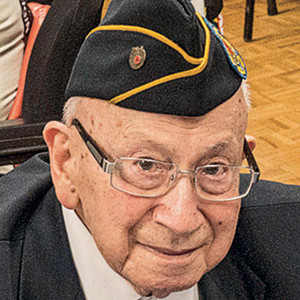 At 29, Roslyn was diagnosed with Hodgkin’s Lymphoma with a tumor resting on the main artery to her brain. After the initial shock and fear, she turned to her parents’ “keep going and never give up” attitude as inspiration in her own fight to beat cancer and overcome many other obstacles in her life.

On October, 1995, Roslyn finished her last of 9 months of chemotherapy treatments and remains cancer-free. Today at 53 she enjoys a healthy, happy life. In looking back, she feels that her battle with cancer has given her a greater sense of inner strength, appreciation for life and continued drive to educate and inspire people toward a better life and a better world by sharing her family story of survival and triumph over tragedy. 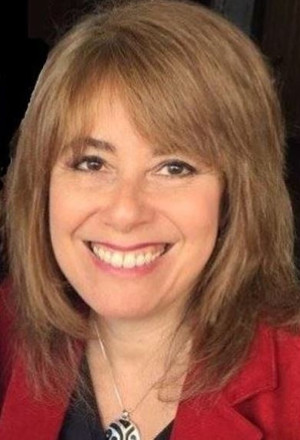 Roslyn is committed to telling her family story to get people to reflect on the collective memory of one of the most horrific times in human history that must never be forgotten. She is reminding people about the dangers of discrimination, indifference and what this level of hatred and evil can lead to if we don’t do whatever we can to stop it. And by telling people about her parents’ examples of strength, faith, appreciation and positive attitude toward life after witnessing and experiencing the worst of humanity, Roslyn is inspiring people toward a greater sense of hope, gratitude and courage to better their own lives and help make our world a better place. 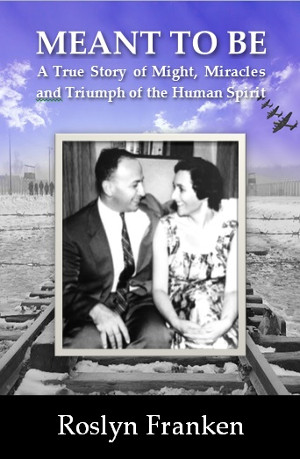 Roslyn’s parents’ story was the subject of a Gemini award-nominated CBC television documentary and a feature-length movie adaption of Roslyn’s book, Meant to Be, is currently in development through Five Star Studios Inc. Roslyn travels worldwide telling her story to diverse audiences. For more information, www.RoslynFranken.com

Who Will Save the Baby?
The Promise Of The Land
Which Chat Are You On?: Parshas Behar/Lag Ba’Omer
Do You Like Slow-Cooked Food? Thank the Jews
Comments
MOST POPULAR IN Spiritual Odysseys
Our privacy policy