My Son with Asperger’s 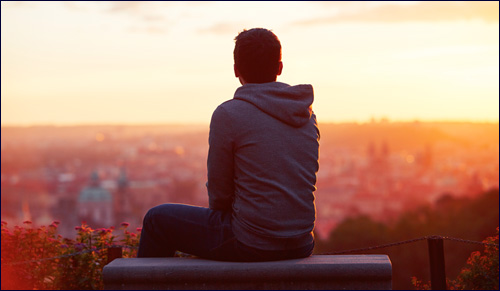 I have begun to see your life through the prism of Asperger's and my frustration is slowly transforming into understanding.

You called me from your army base to tell me that your friend was fighting for his life after being stabbed multiple times outside of the Tel Aviv train station – five minutes from your father's office. You delivered this troubling news in the way you would tell me that it might rain today, in the same monotone that you used for everything.

My heart went into overdrive, praying for this boy I didn't know, trying not to imagine his family's own terror as they kept vigil by his bed.

I sat glued to local Israeli new sites as reports came in describing the attack. Your friend tried valiantly to keep his weapon from being taken by the terrorist. I pictured him walking to catch a train, the same regulation duffle bag you carry slung over his shoulder. Was it filled with homemade cookies his mother sent? Had she sent him off with a prayer like I would do as you waved goodbye on those early mornings when you would head back to your own base in the Negev?

A few hours later, the terrible news came. Your friend would be laid to rest at Mt. Herzl. We spoke about attending the funeral, consumed with the pragmatic side of things, like how you would get there. You didn't know if you should go, since he had been in the unit which you had left.

You chalked it up to another failure in your life, unaware that what brought you to that point was a natural ‘side effect’ of the Asperger’s.

Your friend’s death was a reminder of your dream, which had also suffered a death of sorts. You had always wanted to be in a combat unit, gun slung over your shoulder. You managed to get through the demands of basic training, only to realize that your fear far outweighed your desire to fight. Your commanders extolled your virtues, telling us that you were one of the best and most hardworking soldiers in your unit. This didn’t stop you from requesting a transfer, something you regretted as soon as it was done. You chalked it up to another failure in your life, unaware that what brought you to that point was a natural ‘side effect’ of the Asperger’s. Your pain at walking away from something you wanted so badly mingled with the pain of losing your friend.

“He slept on the cot next to me,” you intoned, giving me a glimpse of a relationship that was as close as was possible for you. You had gone through the rigors of basic training together, something that turns strangers into life-long friends. You would bump into him at times as each of you made your way to your respective bases.

In the end, you ended up hitching a ride from your base and stoically stood as you paid your last respects. After coming home and asking how you were, all I got was, “I don't want to talk about it.”

But I needed to talk, I needed to help you during this traumatic time. Instead, I was shut out of your world and you went to your room to lose yourself in some technological pursuit to ignore the pain. I sighed and cried. I cried for your friend, and I cried for you, my son, who seemed to feel nothing – even now.

Over the next few days pictures of your friend were plastered all over the Israeli media. I cried at intervals even though you didn't. There was a picture of your unit taken at the Kotel at some point during basic training. As I looked at your friend in the center surrounded by the other boys (for that's what you all were) with their arms around each other, I spotted you in the background smiling, yet detached. Your face had a wistful grin as you looked on at your group of friends, as if you were wishing that you could be a part of things. It was as if you were appreciating their camaraderie, even if you couldn't join in. I zoomed in on your face, looking at that smile suspended in time, wishing I could make you feel more whole.

When it came, the Asperger's diagnosis was like a life preserver thrown in the stormy seas.

It wasn't until you finished the army that we continued to pursue what we had been searching for since you began elementary school: some type of diagnosis that would bring us a measure of clarity. We had done so many evaluations, and had met with an equal number of dead ends full of dashed hopes and misdiagnosis. At the suggestion of your therapist, we made one last attempt to try to get to the bottom of your depressive symptoms, your withdrawn mood – your fear of life. When it came, the diagnosis was like a life preserver thrown in the stormy seas that we had been navigating ever since you were a child: Asperger's.

Your father and I knew for a couple of months before we decided to tell you. Your reaction was one of shock and stupefaction: “I'm autistic?!” you cried.

I tried to comfort you, telling you that you were on the highest functioning part of the spectrum. I spoke to you about finally having that elusive road map, how we could finally begin our search for the answers that had been eluding us for the last 22 years.

You sulked around the house, feeling like 'damaged goods'. You lay on your bed, staring up at the ceiling, contemplating this new turn in your life you never asked for. I stood on the sidelines, feeling your pain, yet knowing that there was nothing I could do if you continued to shut me out of your world.

I used to think that people with Asperger's had no feelings and were devoid of emotion. I subsequently learned that the opposite is true. If anything, people with Asperger's feel too much. That is why you shut down the way you do. That is why even when your friend died you seemed more closed than usual. You couldn't handle the internal tsunami that threatened to swallow you in its wake.

I have begun to see your life through the prism of Asperger's and my frustration is slowly transforming into understanding. Your life long fussiness with food that even the army could not cure; all those times I thought you were lacking empathy when really the opposite was true; your lack of friends and self-worth – all of it – all of it is just the soot that is hiding the diamond that is you beneath the surface.

In the last few months we've begun to take baby steps. First, acceptance, followed by our incredible regret that we did not know about this sooner. Yet we believe that God has His ways, and for some reason this was the precise time that He wanted to reveal this information to us. Maybe you needed to be older to take ownership of your Asperger's instead of having us do the work for you. I really don't know. We must now focus on solutions instead of wallowing in the past. God has sent us messengers in different forms, giving us a compass for us to travel in the right direction.

There are times that I worry about the future, wondering if we will be able to overpower the fear of the unknown. There is much I don't know that I am hoping we will conquer, with God's help, with time and the right guidance. What I do know is that you have so much potential waiting to be revealed, and I hold on to the hope that one day you will see it too. And that your father and I love to the very depths of our being.

The Skeptic and the Rabbi

My Palace, My Sukkah
Morality and Abortion: Three Views
There Are No Limits
Adam and Eve Were Vegan
Comments