My Husband Dated Me When I Wasn’t Jewish 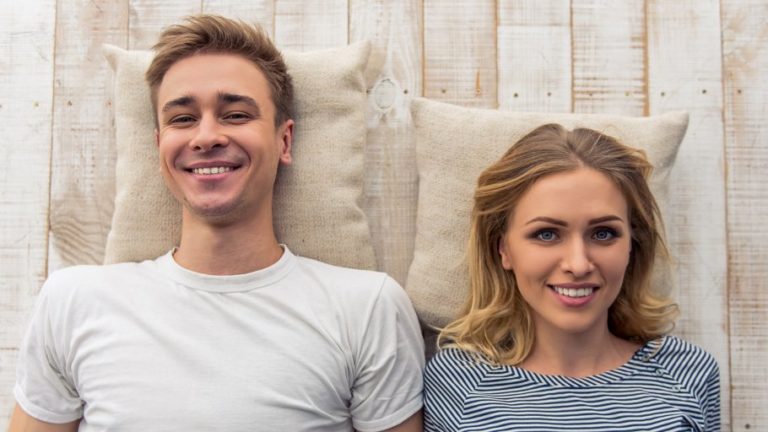 But he refused to marry me and I called him out on it.

When Daniel, my husband-to-be, first met me he thought I was pretty and smart, and as an added bonus, I wasn’t Jewish.

He didn’t want a Jewish girl because he’d had some negative experiences with religion growing up. So he dated non-Jews and never wanted to get married.

I was a blond haired, blue-eyed girl from a WASP background who was always attracted to Jewish men and mostly had Jewish friends. I’d even done Passover Seder with my first serious boyfriend when I was 16.

In the first few months of dating, Daniel and I were living a modern-day millennial fairytale. We lived in Williamsburg, Brooklyn, the hipster mecca, where we’d go out for brunch at the French café down the block, or grab a coffee at one of the many specialty roasters around the neighborhood. We’d frequent comedy shows and raised a rooster and a chicken in our backyard. We’d stay up until the sun rose, watching Woody Allen movies on his couch and talking about our hopes and dreams. We quickly fell in love.

And then one day, while on a train to Coney Island to spend a perfect Saturday on the beach, the topic of marriage came up. I was only 21 and not ready for it, and Daniel and I had only dated for a little while at that point, but I did see myself marrying him sometime in the future.

I won’t marry a non-Jewish girl,” he told me. “Then why are you dating me?”

He quickly squashed that idea. “I won’t marry a non-Jewish girl,” he told me.

I told him that didn’t make any sense. “Then why are you dating me?”

“I don’t want to get married,” he replied, “so it’s a moot point. And I love you, so don’t worry. Nothing else really matters.”

I thought: What does Daniel have against marriage? And why couldn’t marriage and love just conquer all those rigid traditions? Can’t he just love and accept me for me? Why would I have to change for him when he isn’t even religious?

It didn’t get any better when I learned that his family was unhappy with him dating a non-Jew. I just didn’t get it. Black people married white people. Catholics married Protestants. But a Jew couldn’t marry a non-Jew? What made Judaism so special? I was determined to show Daniel that our different religious upbringings didn’t matter, and that eventually we could and should get married, no matter what.

Daniel and I were broke – very broke, in fact – during those first few months together, so he suggested we go and get a free meal at a place called Chabad on a Friday night. He had me at “free.”

That Friday night, something inside of me was sparked. (The pintele yid that I had no idea I had?) I was inspired by the rabbi’s words, the warmth around the dinner table, and the love the rabbi and his wife showed everyone who wanted a meal and a Shabbat experience. I was hooked and wanted Daniel to take me back week after week.

I started delving into Judaism, attending Torah classes and eventually, I decided to undergo an Orthodox conversion. I spent five years studying, taking on mitzvot like observing Shabbat, dressing modestly, praying every day, and eating kosher. I studied in seminary in Jerusalem and moved to an Orthodox Jewish neighborhood in Los Angeles.

Throughout my conversion, as I took on more, I slowly moved further and further away from “old” self. I felt as if my soul was awakening. I had gone from not believing anything to believing in one God, from eating bacon a few times a week to not eating any non-kosher food, from wearing leggings every day to switching over to skirts, and from always being worried about my life to trusting in God that it was all going to work out.

I also finally understood why it was so important for Daniel to marry a Jewish girl. Even though Daniel had strayed far away from Judaism in his youth, he yearned to become observant again. He wanted to ensure that we, as a couple, would raise our children with a love for Judaism and that it would continue that way for generations.

Eventually, sometime during my conversion process, Daniel decided that he did indeed want to marry me. Before he dated me, he hadn’t met anyone he wanted to marry and he told me I changed his mind.

Daniel and I have been married and I’ve been a fully practicing Jew for three years. I’ve been thinking about what I would do if our future son or daughter wanted to be with a non-Jew. That would be a very tough conversation, considering my past. I haven’t yet come to a conclusion about what I would say.

But I do know what I will do: Raise our children in a warm home, ensure they have an in-depth and vibrant Jewish education, show them that same kindness and love that the Chabad rabbi and many family members and friends have shown me, and do our best to instill a sense of Jewish pride in them. I hope that after all that, they will see how beautiful Judaism is and choose to stay. I hope that they will raise their children in a similar way, continue to carry on our amazing meaningful traditions, and do their part to guarantee the future of the Jewish people.

Kylie Ora Lobell is a writer based in Los Angeles. She has written for Aish, The Jewish Journal of LA, The Washington Post, New York Magazine, Tablet, The Forward, The JTA, and The Los Angeles Times. She wrote the first children's book for the children of Jewish converts, "Jewish Just Like You." You can find her online at KylieOraLobell.com.

When Sadie Got Lost

Growing Up Sisters
Lessons from the Book of Jonah
Where Are We? The Body, Brain, Soul Problem
Dr. Sheila Nazarian’s Escape from Iran
Comments
MOST POPULAR IN Spirituality
Our privacy policy
Aish.com Is Looking for Great Writers