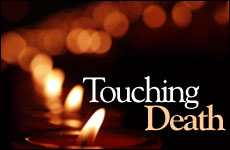 My first experience helping to prepare the body of a deceased person for his funeral.

Today I helped prepare the body of an old man for his funeral.

I wasn't sure how it would go. I've never been good with doctors. Needles and blood make me feel faint. How would I be able to handle seeing the body of a dead person? Since there was a need, I decided to do it.

I asked a couple of people for advice the day before. "It's just like changing the diaper of someone else's baby." "It's the greatest mitzvah [commandment] because there's a 100% guarantee that this person will never repay you for the favor you are doing them." What confirmed my decision was finding out that I would be the third generation in my family to help with the Hevra Kadisha [burial society].

No discussions, no opportunity to ask questions, and no chance to back out.

I don't know if it was intentional, but I arrived a little late. The receptionist directed me to the room where the body was being prepared and off I went. I found my way, stuck my head in the doorway, and saw people I knew from shul around a draped body on a table. I took a deep breath and walked in. I was told to put on a gown and gloves, shown what blessings to make, and given my job of filling the laver for the person who did the initial washing. No discussions, no opportunity to ask questions, and no chance to back out.

I didn't actually see the body for a few minutes so I just focused my attention on my small job. My mind seemed to grasp that whatever my fears might have been, there was nothing to worry about.

I was initially struck by how much the physical body changes when the soul is gone. It seems to literally shrink, like a balloon the day after a simcha. Slightly shriveled, resting on the floor -- a poor reminder of the floating ball of vibrant color you and your kids played with the previous day.

I started to think how much the man resembled a wax figure or a dummy that might be used in a horror movie. Working with him (and yes, it was work) was more like working with a large, very heavy doll.

Every time I started to think this way, I was careful to remind myself that this was a man -- someone's father, brother, uncle or husband. We did our best to maintain an atmosphere of modesty and kept him covered as much as possible. Conversation during the process was kept to an absolute minimum, mostly just instructions about what to do.

It was so beyond the range of my experience that I didn't know what to expect, and even during the process, I still wasn't sure about my own feelings. I just focused on doing what had to be done. There were only a couple of times where a smell would bother me, or seeing how the body reacted after being moved a certain way caught me off guard. By the end of the hour, I was as involved as everyone else there.

It wasn't until after we had dressed him in a shroud and placed him into the casket that it struck me that the four of us from the Hevra Kadisha (I guess I have to include myself now) were the last to see him in his current state -- a body without a soul.

Oddly enough, yesterday I learned in Talmud that the soul doesn't completely leave the body until the last shovelful of dirt is placed on the grave. I believe that this is the reason we are so careful as we go through the process of preparing the body. If it feels like someone is watching, it's because someone is, and it's very personal to them.

They don't have it easy either. They are experiencing something new and are in a place that they have never been before. In many cases, they may be without pain or physical limitations for the first time in a long time. I'm also sure that it's similar to the feeling you have when you are driving and get lost. There is fear and disorientation. Do I keep going and hope it turns out okay, or try to turn back and get some help? Unfortunately, turning back is not an option in this case.

It was not easy, but I guess it's not supposed to be.

As I walked behind the hearse and focused on fulfilling the mitzvah of escorting the dead, I was struck by what I had done. I have been to a number of funerals and been among the mourners. There, everyone focuses on dealing with the living because that is whom the funeral is truly for. Having been one who focuses on the dead, and after escorting this man as he left the mortuary, I have a new perspective.

I will probably repeat this experience in the future. It was not easy, and I'm sure it won't be next time, but I guess it's not supposed to be. I can't recommend this for everyone. It is mentally, emotionally, and to a lesser degree, physically challenging. At the same time, it is a tremendous mitzvah and one of those things that falls into the category of 'You have to do it once.'

I have more respect than ever for the people of the Hevra Kadisha and other similar organizations. They have no desire for glory, recognition, fame or fortune. They are most likely the people in your town who are most focused on doing as many mitzvoth as possible. I would urge you to recognize their dedication and selflessness by making a contribution to your local Hevra Kadisha, either in their own merit or the merit of someone you may know who has benefited from their services.

Jon Perrin lives in Portland, Oregon with his wife and family. He is a business analyst for a health insurance company.

To the Ticket Agent at the Delta Counter

Death Is No Longer a Stranger

A Girl Called Estherke
It Takes A Lot Of Faith To Be An Atheist
How Instagram Brought Back This Nostalgic Soup
What Makes Eli Run?
Comments
MOST POPULAR IN Spirituality
Our privacy policy