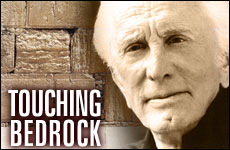 I was sitting on the sofa in my home in Jerusalem, staring into space, when the phone rang. It was my good friend Uriela, calling from Los Angeles. She told me that her boss, Kirk Douglas, wanted to hire me to guide him through the Western Wall Tunnel on his upcoming trip to Jerusalem, where he would be dedicating two playgrounds that he donated.

Her voice had a sly smile as she said, “Here he is,” and handed the phone to – gulp! – one of the greatest movie icons of all time.

I managed to remain coherent for the minute it took to agree to a date and time for the tour.

I spent the next two days slowly reading his autobiography, The Ragman's Son, to find clues for what to highlight, what to toss, and what communication style to use. These gleanings proved helpful before and during the tour:

If Mr. Douglas’ jarring encounter with the near-sacrifice of Isaac was a seminal point of his young life, equally striking was the fact that he would soon be able to touch the bedrock upon which this very story took place. For at the end of the tunnel, the Western Wall’s massive 2,000-year-old hewn blocks of stone suddenly give way to the rising bedrock of Mount Moriah – the site of the binding of Isaac.

I decided to save the high point of the tunnel tour until the end where – at the actual “scene of the crime” – I would re-introduce Kirk Douglas to that Hebrew book picture. But this time it was to be cast in a positive light.

Mr. Douglas arrived on a Friday and called me to cancel the tour. "The Jerusalem Foundation is keeping me so busy with a packed schedule."

I immediately faxed him at the King David Hotel: "Issur has been waiting a very long time for this, and I am one of the few guides who can make the tour meaningful for him. As John Wayne once said: 'No brag – just fact!'"

Moments before Shabbat began, his driver called to say, "Mr. Douglas will meet you in the King David lobby at 10 o'clock Sunday morning for the tour."

That morning, Mr. Douglas and I settled into the plush silence of his driver's Mercedes. The pure white exterior, upholstery and carpeting shut out the cacophony of Jerusalem. At first I felt quite anxious, but as soon as Mr. Douglas began talking in his friendly down-to-earth way, I was at ease.

Most of the 500 meter-long Western Wall is hidden, due to the fact that the Muslim Quarter is built right against it. Dozens of these buildings actually include the Wall in their own structures, such as a family’s living room or a Crusader-era market. Therefore, to reveal the Wall’s entire length, the Western Wall Tunnel was carved out underneath the Muslim Quarter. The tunnel exposes awe-inspiring archeology and is an enormously popular touring site.

Before entering the tunnel, there is a large elaborate model of the Temple Mount area. There, I spoke with Mr. Douglas about how this spot is permeated with a sense of Jewish unity. I pointed out the huge stone in the Western Wall; weighing about 570 tons, it is said to be the heaviest object ever lifted by human beings without power machinery. We then moved along to the part of the tunnel that is the closest to the Temple’s Holy of Holies, which I pointed out as a special place of prayer. We continued traversing the long, narrow space, walking on the actual street that existed in Temple times.

We reached the end of the tunnel, and paused in front of the revealed bedrock which is said to be the spot where Abraham nearly sacrificed Isaac.

I explained that this is the bedrock of the mountain where Abraham took his son Isaac to be sacrificed, and that the story shows that God does not want human sacrifices, Mr. Douglas didn't say a word, but as he touched the bedrock, he was suddenly deep in thought.

In fact Kirk Douglas was so moved that he later wrote:

The picture from my Hebrew school book flashed into my mind. But, to my surprise, it no longer frightened me. I wasn’t sure why. Something had happened to me here that I didn’t quite understand… This place represented the beginning of my doubts. And, at long last, the end of them…

Tracing our steps back to the beginning of the tunnel, the lights suddenly went out. Everything was pitch black. We felt our way along, eventually reaching the spot of the Holy of Holies where some candles had been lit. Mr. Douglas put his forearm against the Wall and leaned his forehead against it. The instant his lips moved in prayer, the lights came on.

Once outside, Mr. Douglas and I sat across from the Western Wall and spoke about the day in 1967 when Israeli soldiers liberated the Western Wall. I then played for him a recording of the newscast from that momentous day. We heard the triumphant blasts of the shofar by Rabbi Goren, the chief army chaplain; General Motte Gur’s announcement that “the Temple Mount is in our hands”; the young soldiers spontaneously singing “Jerusalem of Gold” and Hatikva.

Amidst the rumbling of jeeps and Jordanian sniper fire, a news reporter says in a quavering voice: "I'm going down at this moment... I'm not a religious man, [but] my hands are touching the stones of the Western Wall!" Rabbi Goren recited the prayer for the dead while soldiers could be heard weeping in the background.

At this point, Mr. Douglas' tears overran their banks, and he used the hem of his Polo shirt to dry his face. He sat in silence, perhaps perplexed at what caused him to feel this way.

Kirk Douglas returned to Beverly Hills, and before long he told Uriela of his decision to construct a giant-screen theater at the new Aish HaTorah building across from the Western Wall so that everyone could have the emotional experience he had. He wanted to ensure that when people are inspired to ask life’s most important questions, something is there to provide the answers and inspire them with the Jewish vision of tikkun olam and morality.

I’ve been a tour guide for over 20 years, and I’ve been witness to many moments of epiphany. But I’d like to think that my journey with Kirk Douglas into the Western Wall Tunnel was the catalyst for something grander. As Mr. Douglas later wrote of his experience that day:

Here in the dark tunnel, touching the rock of Mount Moriah, I grew up… I had come full circle. Little did I know that this was just the beginning.

Mark Moskowitz's Story: In Prison for Defrauding Investors, I Turned My Life Around

What I’m Learning about Almost Dying
In the Shadow of David and Goliath
Where Do the Laws of Nature Come From?
Saadiah Gaon, Rashi and Maimonides: How Three Rabbis Revolutionized Judaism
Comments