No Texting or Touching, Please! 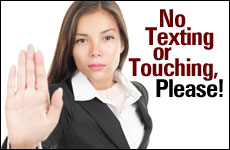 How do I tell him I'm dating for marriage without scaring him off?

Samantha is an attractive, successful, highly educated young woman in her early thirties. She has a satisfying career, tons of friends, and a fabulous rent-controlled studio apartment in Manhattan. She’s also still single after dating exclusively for marriage for nearly five years.

Last month, Samantha met a man online and they have gone out for coffee twice. She really likes him and it seems the feeling is mutual. However, she has two problems. One, he only texts her and won’t actually call her on the phone. Two, he has asked her for a third date but wants her to go back to his place to “hang out” as opposed to meeting again in a public place.

Samantha does not consider herself to be particularly religious, but has strong traditional values and has decided that she is not interested in being intimate with a man until she gets married. That means that the dating process goes southward whenever she meets a guy and there is a mutual attraction. She has more than a vague idea as to what "hanging out" means . . . she just isn’t sure what to do about it.

After years of dating frustration, Samantha thinks she might be embarking upon a relationship with real marriage potential. But she doesn’t want to get physical until she gets that wedding ring. Even if she could think of a way to convey this without feeling totally awkward, she can’t get the guy – let's call him Jake – to return her phone calls with anything other than a text message. How can she let him know how she feels without scaring him away?

Let’s first address the issue of texting versus calling. In the media-entrenched universe in which we live, I am often surprised if people even remember how to use a pen or pencil. Email via a desktop computer is even considered to be passé by so many of us. Why call when you can send a text message?

If she asks to speak to him on the phone and he still just texts, then that’s a red flag.

I don’t have an issue with the fact that Jake's into texting. But if she asks to speak to him on the phone and he still just texts, then that’s a red flag. It doesn’t make him a jerk. It simply makes him an inappropriate candidate for the role of Mr. Samantha because he isn’t listening or respecting her wishes. Texting is not a deal-breaker. Men like techno gadgets and, with the plethora of Hello Kitty iPhone cases around, it seems that females are also guilty of relying heavily on cyber communication.

Related Article: Finding the One

If Samantha politely asks Jake to give her a call, he does, and the conversation goes well, then there’s potential. He’s listening to her and he’s also demonstrating that he wants to respect her needs.

Next comes the real test. Samantha needs to politely tell Jake that she would be more comfortable meeting in a public place. Samantha also gently needs to inform him that she is dating specifically for the purpose of marriage and that she is not interested in being intimate until she gets married. (She actually should have made this clear before she ever agreed to go out with him, but that’s for another article).

If Jake is really into Samantha, and shares what is hopefully the common goal of marriage, then he should like her even more because they are both on the same page. If Jake thinks she is a freak, high maintenance, “old school” or just not for him, that’s great. Why? Because Samantha can move on before getting emotionally involved on a deeper level and risking further disappointment (or worse).

Your soul mate is looking for you. Don’t compromise your values.

The bottom line here is that everyone has habits we may find annoying just as we totally bug other people with our own tendencies. Your spouse does not have to be just like you in order to be a great partner. Remember, you are evaluating the appropriateness of the person you are dating as a potential spouse. Are you being treated respectfully? Are you communicating honestly and do you feel you are being listened to? And, most importantly, do you have common life goals? Are you both on the same page? If so, you might be embarking on a relationship with real marriage potential. If not, you are one step closer to finding your match. Don’t waste time if this one isn’t right.

Samantha, your soul mate is looking for you, flaws and all. Don’t compromise your values, and be up front about them before you agree to that first date. You don’t need to date a lot of people. You just need to narrow down your list of potential suitors to screen out people who don’t want to date the way you want to. Your future life partner is searching for you. Focus on the big picture, keep your values in check and get back out there!

Dating in the Age of Corona

Creating Space for Love
The Promise Of The Land
Which Chat Are You On?: Parshas Behar/Lag Ba’Omer
Do You Like Slow-Cooked Food? Thank the Jews
Comments
MOST POPULAR IN Dating Wisdom
Our privacy policy