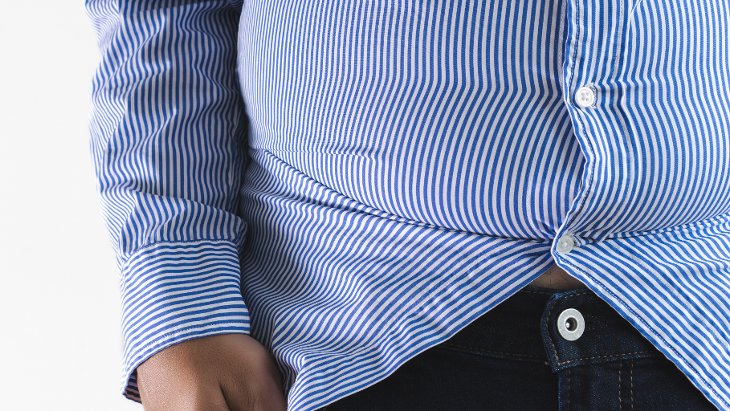 When he weighed 700 pounds, Yechezkel wanted to die.

Yechezkel, a 65-year-old Chicago native, says he was born a compulsive overeater. At his top weight of more than 700 pounds (318 kilos), he wanted to die.

He remembers being 4 years old and hearing people shaming his parents about how fat he was and how much food he ate. Meanwhile, family friends who had survived the Holocaust would pinch his chubby cheeks and implore, “Live until you die.”

Most of the adults he knew as a child were survivors with numbers on their arms and broken spirits. Looking back, he believes they were telling him to live to the fullest, be productive, serve others and serve God.

“It took me a long time to figure out ‘Live until you die’ doesn’t mean you eat as many KitKat bars as you can get your hands on. It means you maximize your life and you do the best you can to bring the joy and spirit of recovery and God to others. There is no greater joy than to help another person.”

An only child born to a 36-year-old American mother and 54-year-old father who had escaped pogroms in White Russia in 1914, Yechezkel never would have the storybook life he dreamed of. His father was the sole survivor of a family of 40 people who were obliterated from the face of the earth. “The sights, the sounds, the screaming haunted him his entire life. He never recovered from that.”

As a child, I believed that existentially I was wrong, evil and did not deserve to live.

Yechezkel buried himself in food from as early as he can remember. By the time he was 6, people were screaming at him directly about how fat he was getting and how much food he was eating. Perhaps they thought they were helping him.

They said fat boys would never play on the baseball team, go on dates with girls or have good jobs. Fat boys would never look good, feel good or be good. "As a child, I believed that existentially I was wrong, evil and did not deserve to live.”

In fourth grade a doctor put him on diet pills—amphetamines that kept his mind and body racing. “It was a nightmare, but I didn’t eat and I lost a lot of weight. But when those pills wear off, you eat Illinois and most of Wisconsin.”

Yechezkel went from 335 pounds as a senior in high school and 600 pounds when he graduated college. Everywhere he went, he was the butt of jokes. Children would laugh at him, while adults would point at him. Strangers would slap his stomach and ask when the baby hippopotamus was due. He pretended the comments didn’t bother him while inside he was dying.

“The disease of compulsive overeating beat me down and extinguished every dream I could dream. Everything excluded me from normalcy,” he says. “Food and eating became everything in my life. I was either actively eating or not eating” with diet programs.

That all would change when his parents died. A diabetic who ate in secret herself, his mother told Yechezkel on her deathbed in 1976 when he was 22, “You can’t live like your father, full of rage, fear and hate. If you live like him, you’ll be like him. You’re going to have to find a way not to eat so much, my son.”

Likewise, his father begged on his deathbed in 1978 when Yechezkel was 24, “Don’t eat so much, my son. You’re killing yourself. You’re going to be alone now.”

Yechezkel had no siblings, aunts, uncles, cousins or grandparents. But he did have wonderful friends. The mother of one of them invited him to go with her to an Overeaters Anonymous meeting on Feb. 2, 1979.

As Yechezkel would discover, food was never his problem. “All of my life, I believed if I didn’t eat so much and weigh so much, everything would fall into place, perfect and magical. Not true. The problem is that when I’m not eating, I’m restless, discontent, jealous, etcetera. These emotions burst to the surface inside me like a Roman candle.”

Overeaters Anonymous (OA) helped him learn how to live differently. A 12-step program patterned after Alcoholics Anonymous, OA is not just about weight loss, weight gain or maintenance. According to a press release, “The OA program offers physical, emotional and spiritual recovery for those who suffer from compulsive eating. Members who recover through the Twelve Steps find that yo-yo dieting is a thing of the past. ­They no longer wish to return to eating compulsively.”

OA is not affiliated with any public or private organization, political movement, ideology or religious doctrine.

Today Yechezkel is grateful for a beautiful relationship with God, and through that, with himself.

Yechezkel has lost 500 pounds thanks to a spiritual awakening as a result of working the 12 steps of the OA program. They involve admitting powerlessness over food and behaviors, asking a Higher Power for help, making a moral inventory of harm done to others, making amends, praying and meditating, and being of service to others.

For him, OA has provided a home with kindred spirits who understand the range of issues, from compulsive overeating to bulimia and anorexia. He has found family bound together by tragedy, recovery and affection.

Today Yechezkel is grateful for a beautiful relationship with God, and through that, with himself. “OA is 100 percent responsible for my perception of God: loving, kind, munificent, helpful, miraculous, merciful.”

“I have a life worth living,” he says. “My bills are paid. I walk the streets a free man. I don’t have to lie or hide or try to die, because God whispered on the remaining ember of my heart and burst it into flames. When I walked to Him, He ran to me. Test Him. He will meet you where you are. He will lift you up. Your recovery will be a beacon of hope.”

At My Grandson’s Bris: Hanukkah, Self-Sacrifice and the Infinite

My Thoughts of Life and Death on Yom HaShoah

How Shabbat Saved a Girl from the Triangle Factory Fire

Stepping into the Sukkah
Near Death Experience Panel
The Western Wall: The Heart of the World
Ask the Right Question: Tisha B’Av
Comments
MOST POPULAR IN Spirituality
Our privacy policy
Aish.com Is Looking for Great Writers