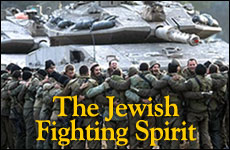 On the front lines with an IDF rabbi.

At the beginning of the Gaza ground offensive, I had the privilege of accompanying the soldiers of the Golani Brigade's Regiment-12. I am the regiment's rabbi, in reserves, and I was called up to serve just like the all the rest, to "aid Israel at its time of tribulation."

As a rabbi in a yeshiva who usually walks around wearing a jacket and hat, I now had a major change of atmosphere: my black "uniform" became one of dusty dark green, the hubbub of the Torah study hall was replaced by the raw army slang, and my wife's delicious food was given up for the "delicacies" of the mess hall.

We spent most of the week in "wet tents," with the terrible cold preventing me from sleeping at night. I apparently wasn't working as hard as the other soldiers, because they fell asleep the second they hit the pillow.

My work, as an official of the Army Rabbinate, was to give encouragement and strength to the soldiers, give out Books of Psalms, and distribute special prayers for those who go out to battle.

And what did I discover down there in southern Israel? When the Golani Brigade soldiers were about to go out to war, there wasn't a soldier there who didn't equip himself with a Books of Psalms in his pocket or combat vest. But the big surprise we had was when we gave out tzitzit (four-cornered shirt with the required ritual fringes attached). Usually only the religious guys take them, but this time, every soldier there seemed to want one.

"Rabbi, bring me some tzitzit, my whole tent wants." "Hey, achi (my brother), take one of these, it's better than the ceramic vest!" These were the type of calls we kept hearing over and over. Every package of tzitzit that we opened was snatched up within seconds.

Every package of tzitzit was snatched up within seconds.

There was one young fighter who came to the synagogue whose face fell when he heard that there were no tzitzit left. He was totally bereft, until one of the officers who wasn't going out to battle took off his own tzitzit and gave it to him, saying, "Take it, achi (in the Golani Brigades, you can't say something without achi), you need it now more than I do."

The Friday evening Shabbat prayers were simply unbelievable. The Rabbinate realized that the synagogue was too small to fit all the hundreds of soldiers, and so it turned the soccer field into an impromptu synagogue, with prayer books, Holy Ark, and everything else.

Our loving Father, too, was there, enjoying every minute of His sons gathering around Him. Our Father doesn't ask, "Where have you been until now? Why do you remember Me just when you go out to war?" He welcomes all His children and embraces them with love.

God welcomes all His children and embraces them with love.

After the Shabbat meal, held in an atmosphere of a great "high," we were privileged to hold an Oneg Shabbat "social gathering" for the soldiers. Chief IDF Rabbi Avi Ronsky was with us the whole Shabbat, and he warmed our hearts with stories of the Jewish people, on compassion, on brotherly love, and more. We sat outside in the cold eating cake and sunflower seeds, but inside our hearts it was warm.

On Shabbat, we had to travel to the places from where the soldiers would depart for Gaza. We arrived and the soldiers were imbued with combat spirit, getting ready, trying to get in a last cigarette. Many soldiers tried very hard not to smoke on Shabbat, and they would come up to me every five minutes and ask if the Shabbat had ended yet.

When Shabbat ended, it was time to go in. The Regiment Commander gathered everyone for last-minute words of strength, and explained about the "corrective experience" we were about to impart to the enemy.

When he finished, the Deputy Commander read aloud the prayer before going out to battle. "Repeat after me," he ordered, and a whole regiment of hundreds of soldiers yelled out, "O God, save us! O God, grant us success!" After the prayer, the Deputy Commander asked me to blow the shofar, just as thousands of years ago when we conquered the Holy Land.

Though I've blown the shofar in public before, this particular time was something that will remain with me my whole life. And then, in perfect coordination, the moment that I finished blowing the shofar, our Israel Air Force planes bombed the enemy area, as if to signal us to begin the ground offensive.

The soldiers lined up in two columns, and as I parted from them with handshakes, I thought to myself, What a special nation we have! This is how a Jewish army looks as it goes out to war -- not with boastful "We will win" stickers, but rather "We will win with God's help."

Where I live in Modi'in Illit, we have a clever interpretation of the verse "God's voice is powerful" -- the word for power (ko'ach) is spelled with the letters kaf and chet, which we say are the initials of kova and chalifa -- hat and suit, our usual yeshiva garb. But now I know they are also the initials of the kumta chuma -- brown beret, worn by the Golani soldiers. There, too, the voice of God is heard. We are truly united as one nation, may the Almighty protect us.

This article originally appeared on IsraelNationalNews.com

How One Small Brave Act Saved Thousands of Lives

A Simple Twist of Faith

Promise and the Tuk-Tuk

A Jew's Quest in the Peruvian Amazon