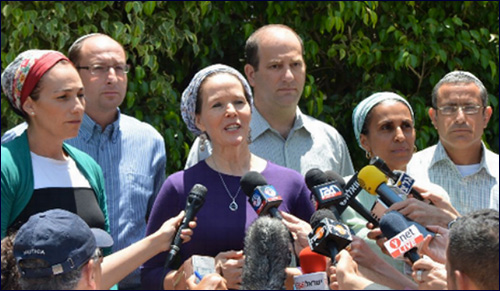 Instead of breaking us, this horrific act of terror has brought us all together.

This past Sunday, a woman named Racheli Fraenkel gave one of the most remarkable and moving pleas ever delivered by an anxious mother.

In remarks that spanned just 90 seconds, Fraenkel, whose 16-year-old son Naphtali was one of the three Israeli teens kidnapped last week by Palestinian terrorists, exemplified the virtuousness and inner strength of the entire Jewish people.

"I came out to say thank you," she began, before graciously praising others for their help and support.

There were no words of anger or rage, no hatred or calls for revenge. Indeed, from the outset, this woman, who had surely just been through the worst 48 hours of her life, immediately focused attention on others, making sure to offer them thanks and encouragement, as if she was not the one in need of such reassurance.

No one would have faulted Frankel for screaming, breaking down in tears or hurling accusations. No one would have condemned her for criticizing the powers-that-be, demanding action and blasting a world indifferent to Jewish suffering.

But in a steady and composed manner, this loving Jewish mother voiced appreciation for the "waves of prayer and support" and "positive energy" she and her family had received from a sympathetic public.

"Please pray with us," she asked, as tears began to well up in her eyes.

"They were just boys on their way home from school," she pointed out, before concluding on a poignant note of optimism. "We'll hug them soon," Frankel vowed, adding, "God willing, we will be able to celebrate their return safely."

What incredible inner strength! Like most Israelis, I spent this past weekend in a fog, my thoughts clouded by a mix of worry, disbelief and indignation.

I could not concentrate, found it difficult to fall asleep and felt guilty for laughing at a joke or savoring the aroma of a freshly brewed cup of coffee.

Immediately after the end of Shabbat, I rushed to check the news, hoping, praying that a miracle had occurred and the three kidnapped youths had been safely returned to their families.

Unfortunately, that did not happen, and I remained glued to the television set, desperately wanting to hear the anchor announce there was breaking news to report.

Instead, the viewing public was treated to one talking head after another, as the various channels tried to fill the time even though they had little if anything to report.

And then it happened. In an unexpected twist, I caught a glimpse of the indomitable spirit of the Jewish people, the unseen elements that are the secret of our survival down through the generations: faith and determination.

Across the country, in spontaneous and simultaneous acts of solidarity, thousands of Jews came together to do what Jews have always done in times of distress: They gathered to pray.

Just as Racheli Fraenkel had asked.

And not just on Saturday evening, when it was easy and convenient. Sunday too saw massive prayer gatherings at the Western Wall in Jerusalem, and at public facilities and schools throughout the country.

Tens of thousands of Jews from all walks of life put aside their arguments and differences, their quarreling and squabbling, and raised their voices as one, pleading with the Creator to have mercy on His children, on our children.

At the central synagogue in Ra'anana, an overflow crowd packed the sanctuary, spilling out onto the pavilion outside.

Several chapters of Psalms were recited, as young and old alike swayed back and forth in mounting intensity.

There was none of the chatter that often accompanies organized prayer services, no gossiping or sarcasm on display.

Just prayer, just the simple act of pouring out one's heart, imploring our Father in Heaven to heed His attribute of mercy and foil the plots of our foes.

As the verses written by King David soared upward, carried ever higher by the sincerity with which they were uttered, I looked around and pondered this extraordinary scene.

The Palestinian terrorists who had kidnapped those three children surely felt that in doing so, they would shatter this nation's morale. Our enemies know all too well how much we value life, and how precious we consider every soul to be.

Certainly, they told one another, this abduction will bring the people of Israel to their knees.

And that, perhaps, was their biggest mistake of all. Because instead of breaking us, this horrific act of terror has brought us all together, united as one in our love and concern for those three Israeli teens.

It has touched a nerve deep inside every one of us, reminding us that we must stand up to evil, confront it and defeat it, showing no mercy to those who seek our destruction.

Ironically, by seeking to rupture our resilience, the terrorists have only made us stronger. By attempting to crush our spirit, they have instead awakened our innate fortitude and valor.

I have never been more proud to be a part of this nation, to belong to a people that despite unprecedented injustice, continues to cling to its conviction and faith.

Armed with such belief, and confident in the justness of our cause, there is no power on earth that can or will stand in our way.

A Hand, Not a Handout

When the State of Israel Was Born: 6 Fascinating Eyewitness Accounts
Can You Show Me This "God?"
How to Become Immortal
Judaism and Mental Health
Comments
MOST POPULAR IN Israel
Our privacy policy
Aish.com Is Looking for Great Writers