The Courage to be Different 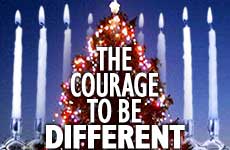 A Jewish boy's request for a Christmas tree leads to an important discovery: to be truly universal, we must first be able to give to the world our own light.

It was the winter of 1952. I was six years old, and my mother took me on a walk around our neighborhood in downtown Brooklyn, New York City. The stores were all lit up for the Christian holiday, and in each store window, there was a Christmas tree prominently displayed.

"Mommy," I asked, "Can we also have a Christmas tree in our house?" My mother was surprised by my request, and she responded: "As you know, Jeffrey, we are Jewish, and Jewish people do not celebrate Christmas. It is not our holiday."

The next night, I was in for a surprise. My parents called my younger sister and me into the living room and pointed to a small candelabra. "This is a Chanukah menorah," my father explained, "and tonight begins the celebration of the Jewish holiday of Chanukah." He gave a brief summary of the Chanukah story, and then lit the first candle.

My parents were conveying to my sister and me that we should not be ashamed to be "different."

This was my first Chanukah celebration. When I grew older, I was told that my question concerning the Christmas tree had inspired my parents to begin the celebration of Chanukah in our own home. Until then, my parents had never explained to us that we had Jewish holidays of our own. Both of my parents were progressive social activists who were involved in a variety of political and social causes for the betterment of society, and the conversation in our home centered on the evils of prejudice and the importance of recognizing that all human beings are basically the same, despite our different skin color or religions. My parents did not consider themselves "religious," although they often spoke about human brotherhood and how we are all "God's children."

My request for that "tree" evoked in my parents a sense of Jewish pride, and they realized that they had neglected an aspect of our education. By bringing the Chanukah menorah into our home, they were conveying to my sister and me that we had a identity, and that we should not be ashamed to be "different." As the years went by, our family began to celebrate other Jewish holidays,
and to the delight of my parents, most of our non-Jewish neighbors greatly
respected us for honoring our traditions.

When I was eight years old, my mother registered my sister and me at the afternoon Hebrew school which was sponsored by the Orthodox synagogue in our neighborhood. The more I studied about Judaism and the history of the Jewish people, the more I felt connected to my spiritual roots. At some point, I decided to constantly wear a yarmulke (skullcap). A gang of non-Jewish teenagers in my neighborhood did not approve of my Jewish garb, and they started to run after me, shouting, "Jew-boy" and other anti-Semitic comments. I ran up the stairs to the safety of my home, and I later told my father what happened. He said to me in a firm voice: "Don't ever take off your yarmulka! Be proud that you are a Jew!" My father was teaching me that I should have the courage to be different.

The Germans said that children who did not participate in singing Christmas Carols would be shot.

My neighbor's mother also conveyed to her children this message in very different circumstances. During World War Two, the Germans placed his mother and his older sisters in a concentration camp in Northern Germany that was just for women and children. When the Chanukah holiday arrived, they were not allowed to celebrate in any way; moreover the Germans gave the Jews the following order: All the children must go to a series of rehearsals to learn how to sing Christmas Carols, and on Christmas Day, they are to perform before all the soldiers and camp officials. Children that did not participate would be shot. My neighbor's mother, together with a friend, decided that their children would not perform. They had endured all forms of suffering, but they would not submit to this public mockery of Jewish beliefs. Somehow, they found a way to hide their children, and miraculously, their lack of attendance was not even noticed by the officer in charge.

The full story of how my neighbor's mother and his sisters managed to survive will be told in a forthcoming book that my neighbor is writing about his mother. He and his sisters grew up to be committed Jews, and he is devoting his life to teaching Torah to Jewish children. He is a beloved figure in my neighborhood, and the children love to be around him.

There are those who feel that in order to be "universal," one must assimilate into the culture of the majority. Chanukah, however, provides us with a different understanding of how to be "universal." It conveys the message that to be truly universal, we must first have the courage to be different. In this way, we will be able to give to the world our own light.