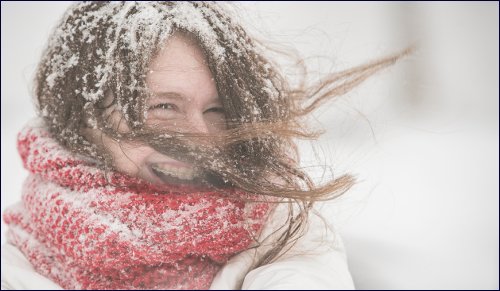 Because every moment is a chance to grow.

Waking up to 50 mph winds and snow covered streets on Tuesday morning, I watched a snowplow inch down on our block in the pre-dawn light. For a half a minute, the road was visible and then it was blanketed once again in a misty white blizzard. A travel ban had been announced and as I looked out the window all I could suddenly see was a great opportunity to run through the snow.

The snow was deep enough to be a serious workout, but not so deep yet that I couldn’t run through it. And the wind was strong enough to be a solid source of resistance, but not so rough that it would stop me in my tracks. When I stepped outside a huge gust of wind blew snow right into my eyes; it was the perfect day for an epic run.

We’re often told to “be in the moment” – be mindful of where you are right now – but it can be hard to do when the present moment isn’t a comfortable place to actually be. Sometimes it’s boring. It’s dark and cold. It’s frustrating and disappointing. And sometimes it hurts. The snow is blowing in our eyes. The wind is trying to knock us down. And there seems like no end to the blizzard. That’s when we have the chance to look at the moment before us as a challenge.

And when we view every single moment, sunny or stormy, as an opportunity to grow and become stronger, we can find a way to be constantly present in our lives. The blizzard becomes a great workout. The wind becomes a tool to overcome resistance in our lives. The snow blowing in our eyes becomes a way to learn how to keep going even when we can’t see more than a foot in front of us.

Here are four other lessons in seeing every moment as a chance to grow that I learned from my run through the Northeastern blizzard of 2017:

1. Start early. I was tempted to sit a bit longer with my coffee as I pondered heading out into the storm. But I knew that the longer I sat in our warm house on the couch, the less likely I was to actually get out the door. And every minute that I delayed the inevitable transition from cozy living room to gusty winds, the snow was getting deeper. In another hour, the snow would be too deep for me to run through. Wake up early. Begin as soon as possible. Don’t sit around pondering the cold.

2. Make a path. During the blizzard, I formed a one mile path that I circled repeatedly in the snow and I followed in my own footsteps. The more times I circled that path, the easier it became for me to run. Create positive paths and keep putting one foot in front of the other until there is a pattern of growth from your footsteps.

3. See the awe. One of the most precious traits that children have that we often lose when we become adults is their capacity for wonder. The ability to be endlessly fascinated with the world around them and to see beauty in our seemingly mundane surroundings. But we can train ourselves to look at the world around us with wonder again. We can look out at a swirling blizzard and feel its overwhelming power and beauty in an enormous sky that opens our hearts up to the miraculous grandeur of God’s world.

4. Feel the gratitude. It is all too easy to forget how many blessings we have in our lives. Our default mode is one of expectation instead of appreciation. But there is always so much to be thankful for. While I was running through the snow, every step was a chance to express gratitude. Thank You for that step. And for this one. For that breath. And for this one. For the sunny days. And the stormy ones. For the beautiful moments and the hard ones.

Thank You for teaching me that every moment is a chance to grow.

Tetris and Wiring Your Brain for Positivity

Three Apps for the New Year

Just Don’t Do It