Misrepresenting the Jewish Refugee Rescue in the Philippines 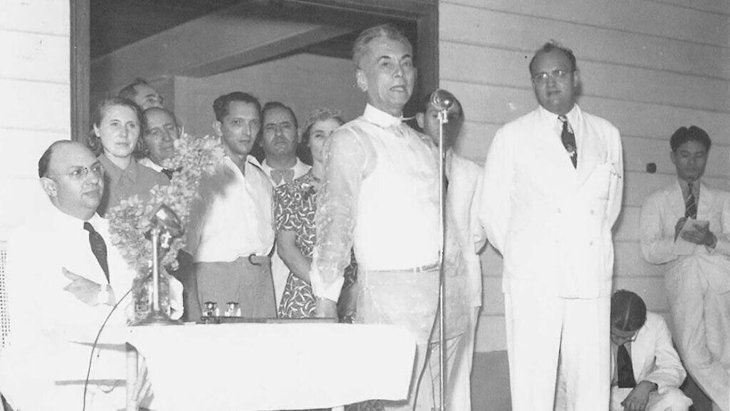 Historical fallacies about this story are currently circulating. It's important to set the record straight.

William Blake, an English poet of the Romantic era, stated that telling the truth “is not for the sake of convincing those who do not know it, but for the sake of defending those that do.”1As a Holocaust historian, I can do nothing less. In a world growing more removed from the historical events experienced by generations of Holocaust survivors, witnesses, rescuers, and even perpetrators, it is my life-long mission as a Holocaust scholar to honor those lives, and indeed generations of lives, forever altered through acts of murderers and heroes by keeping their truths forever illuminated.

Misrepresentations of facts surrounding these truths, whether deliberate or unintentional, only fuel the ever-growing rhetoric of Holocaust deniers.

Seventeen years ago I embarked on my pioneering doctoral research discovering and authenticating the evidence surrounding the rescue of refugee Jews in the Philippines between 1937 and 1942. After six years of extensive archival research throughout the world, I completed my dissertation in 2009, From Zbaszyn to Manila: The Holocaust Odyssey of Joseph Cysner and the Philippine Rescue of Refugee Jews. In the intervening years since 2009, I have published extensively on this and related topics in journals, magazines, websites, and books, with my latest and most complete treatise, Philippine Sanctuary: A Holocaust Odyssey, published by the University of Wisconsin Press in January 2020. I am recognized in the field of Holocaust scholarship as the authoritative voice of this story, appearing throughout the United States and the world at various conferences, film festivals, and commemoration events, the latest being as guest speaker at the United Nations for the International Holocaust Remembrance Day on January 27, 2020. I only expound on my professional qualifications to emphasize my level of expertise with the history of this unique story, which unfortunately has become shrouded over the last several years by urban legends. It's important to set the record straight and to dispel these historical inaccuracies regarding the rescue of refugee Jews in the Philippines. 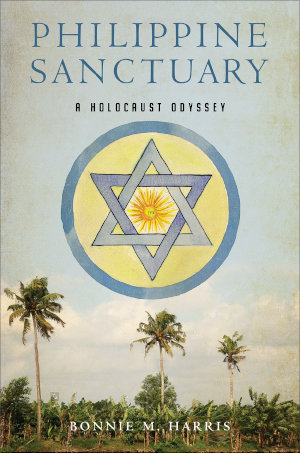 In 2013, a documentary film, “Rescue in the Philippines,” written and directed by Russell Hodge, Cynthia Scott-Johnson and Terry Irving, was produced and distributed by 3 Roads Communications. While there is much to be lauded in this film’s depiction of historical events surrounding efforts in assisting refugee Jews fleeing Nazi-occupied Europe for the Philippines, there are specific claims made in the film that are not supported in the documentary evidence.

This film asserts that a family of Jewish businessmen, known as the Frieder brothers, conceived the rescue plans over games of poker with prestigious gambling partners such as Manuel Quezon, President of the Philippines, Paul V. McNutt, US High Commissioner to the Philippines, and then Lt. Colonel Dwight D. Eisenhower, senior aide and chief of staff to General Douglas MacArthur. While there is ample evidence that these good gentlemen did indeed enjoy numerous evenings of fine cigars over amicable games of poker, there is absolutely nothing in the documentary record, including those of the Frieder Family Collection of documents housed in the Jewish Distribution Committee Archives in New York that even allude to these esteemed poker games, let alone discussions concerning Jewish refugees. Family stories handed down generationally should not be professed as historical evidence, when they cannot be substantiated with any documentation. 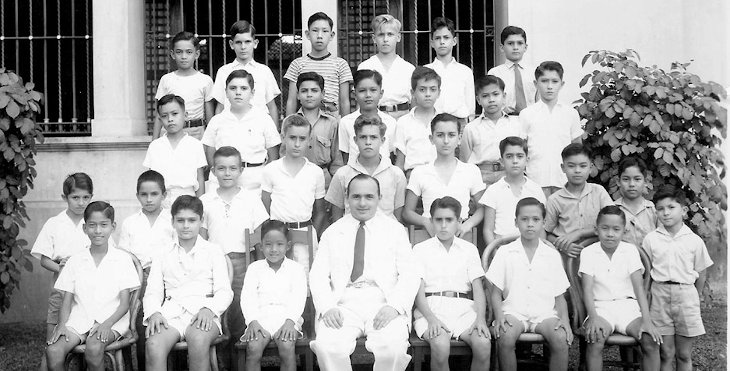 Cantor Josseph Cysner, a Jewish refugee rescued by the Philippines, with his students at de la Salle College boys school circa 1940.

The true scenario is infinitely more interesting, involves a more complex series of events, and includes a much larger cast of participants.

“Rescue in the Philippines” overlooks the actual series of verifiable and documented events that resulted in Paul V. McNutt (US High Commissioner to the Philippines) bringing the proposal of Jewish refugee rescue to Philippine President Manuel Quezon, an idea discussed between McNutt and Jacob Weiss, a friend and political colleague of McNutt’s during his time as governor of Indiana. Jacob’s brother, Julius, worked for a well-known Jewish Relief Agency in NYC, the Refugee Economic Corporation (REC), and it is he who urged his brother Jacob, per the REC’s request, to discuss the matter with McNutt during a visit McNutt made to Washington DC in February 1938. Upon his return to the Philippines in March 1938, McNutt took the idea to Pres. Quezon, who fully supported the rescue proposal and McNutt then turned to the officers of the Jewish Community in Manila and asked for their efforts in devising the mechanics for such a rescue plan.

This is when the Frieders, as one of the members of the Jewish Refugee Committee (JRC) in Manila, were introduced to the idea. This documented inception for Jewish refugee rescue in the Philippines actually came via the Weiss brothers to McNutt, not by the Frieder brothers over poker games. 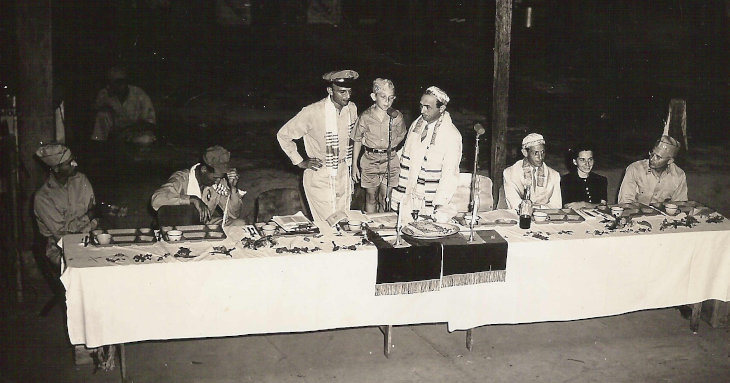 The JRC in Manila was manned by members of the Board of Directors of the Temple Emil Congregation: Samuel Schechter, President; H. M. Levine, Vice-President; Morton I. Netzorg, Secretary, and one of the Frieder brothers as Treasurer, along with other board members. After the Jewish Refugee Committee was tasked with the job, I do not discount that subsequent discussions about methods for bringing Jews over from Europe may have transpired over poker, but even such alleged conversations as these are nowhere documented. The film also asserts that McNutt had to coerce cooperation from the US State Department in order to implement the rescue. I can verify that he never importuned the State Department for permission to issue visas because he had supreme power over those decisions as the representative of the President of the United States in his role as High Commissioner in the Philippines.

The notion of Eisenhower at the center of this rescue is a complete canard.

In connection with the family stories of the poker game origins for the rescue plan, there is the continued assertion throughout the film that then Lt. Colonel Dwight D. Eisenhower was an active participant in the planning and execution that brought 1300 refugee Jews to the Philippines. Even in the promotional materials for their DVD album, the producers assert that “the five Frieder brothers – Cincinnati businessmen making two-for-a-nickel cigars in World War II Manila – banded together with charismatic first president of the Philippines Manuel Quezon, U.S. High Commissioner Paul McNutt, and an ambitious U.S. Army Colonel named Dwight Eisenhower to help nearly 1,300 Jewish men, women, and children escape the Nazis and immigrate to the Philippines.”2 The DVD’s front cover boldly displays the official photo of Eisenhower when he was promoted to U.S. General of the Army, Supreme Allied Commander, wearing his new rank, a 5-star cluster on his uniform’s shoulder strap, taken in February 1945 – six years after he left the Philippines.

This notion of Eisenhower at the center of this rescue is a complete canard. I do not discount that the Frieder brothers were friends with the Eisenhowers and did enjoy many games of cards, but there is absolutely nothing in the documentary record, not even at the Eisenhower Presidential Library, to support the claim that Eisenhower was involved in any way whatsoever with these rescue plans. All statements made in the film about this implied involvement of Eisenhower in the rescue are innuendos meant to depict historical facts that simply are not true, thus distorting the real evidence.

Eisenhower biographer Carlo D’Este notes in his monograph, Eisenhower: A Soldier’s Life, that Eisenhower was approached in early 1938 by unnamed Jewish persons representing Hong Kong, Shanghai, and Manila, who offered him a lucrative position in the private sector if he would head up Jewish rescue operations in Asia,3 but Eisenhower quickly and unequivocally “declined” the offer, as he relates in his own memoir, At Ease: Stories I tell to Friends.4 In his own memoirs, there is nothing to suggest that he played any part in the resettlement of Jewish refugees in the Philippines. As a historian, I feel it an inviolable code of ethics that only verifiable facts be included in a historical account. To include anything else is a desecration of the memory and the trust of those whose stories we seek to share with the world.

Unfortunately, these sensationalized, erroneous stories of Eisenhower and his poker companions devising Jewish rescue plans over card games have taken on a romanticized life of their own across the internet. Columnists in newspapers and magazines unknowingly continue to spread these feigned histories. Screenplays and scripts for spin-off movies and other documentaries are also tainting the story as they are relying on the misleading information portrayed in this film, which is misconstruing the veracity of the true facts about Jewish refugee rescue in the Philippines.

The integrity of the history concerning the Philippine rescue of persecuted Jews from Europe, the rescuers who made it happen, and the lives they saved must be rightfully preserved and that can only happen if we keep its truthful flame burning brightly for future generations by extinguishing the misconceptions that dim its honor.

Bonnie M. Harris, Ph.D. is the author of Philippine Sanctuary: A Holocaust Odyssey

Menachem Begin on the Lessons of the Holocaust

Like Sheep: Why Didn't You Fight?
How I Learned to Love the Multiverse
10 Big Jewish Inventions
A Journey through Jewish Sicily
Comments