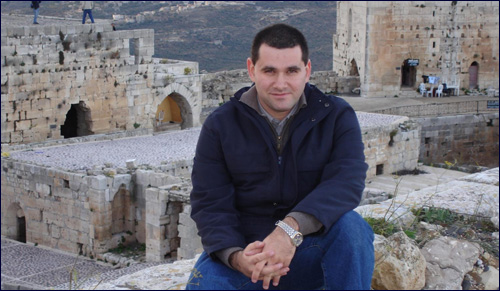 Aboud Dandachi wants the world to know how remarkable Israel is.

Aboud Dandachi, a 39-year-old Syrian refugee currently living in Istanbul, is telling the world, “Thank you Am Yisrael.” He’s blogging, Tweeting and posting his thanks to Israeli and Jewish organizations and individuals for helping Syrian refugees, and the world is beginning to listen.

“There is nothing remarkable about saying thank you,” Dandachi explained in an Aish.com exclusive interview. “The Israelis and Jews who are risking everything to help my people are remarkable. They had every reason to keep well away from the refugee crisis created by the war in my country, but all over the world Jews have shown a tremendous compassion and generous spirit towards Syrians. Saying thank you is the least a person can do.” 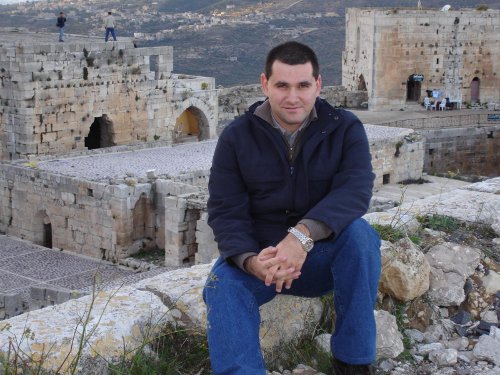 A Sunni Muslim from the Syrian city of Homs, Dandachi worked as an IT project manager before the civil war that has torn his country, leaving over a quarter of a million dead and causing the displacement of four million Syrian refugees. Dandachi left Syria in 2013, fleeing first to Lebanon, and then to Turkey where he currently lives in Istanbul.

It increasingly dawned on me that no Israeli had ever done me any harm whatsoever.

Over the past five years of war, Dandachi, like many Syrians he describes, was forced to reexamine many of the beliefs he grew up with. Raised in Syria and Saudi Arabia, and having attended university in Jordan, Dandachi describes these environments as “very anti-Semitic,” inculcating suspicion and distrust of Jews and Israel. As he watched the fighting unfold in Syria and then embarked on life as a refugee, Dandachi began to reconsider many of his assumptions.

“It was a gradual process,” he explains, “when it increasingly dawned on me that no Israeli had ever done me any harm whatsoever - and yet I was a refugee precisely because of what fellow Syrians and Arabs had done to my city. So why on earth would I want to be enemies with Israelis? It makes about as much sense as being enemies with someone from India or Japan or Argentina.” 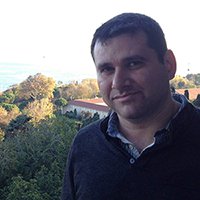 At the same time, Dandachi began to hear about Jewish and Israeli organizations that were mobilizing to help Syrian refugees - often at great danger to themselves. Hundreds of Syrians have received life-saving medical treatment in Israeli hospitals. Israel’s army has operated a field hospital at the border with Syria. Israeli aid workers are working with Syrian refugees in Greece, Germany, the Balkans and Jordan, and ordinary Israelis have flocked to donate clothes and supplies (first removing Hebrew-language tags and writing in order to disguise their origin in the Jewish state). Jewish communities around the world have mobilized to help those displaced by Syria’s war.

As he read and learned more about what Israeli and Jewish individuals and groups were doing, Dandachi, explained, his thinking gradually changed.

The impetus to find a way to publicly say “thank you” came in 2014, when Israeli Prime Minister Benjamin Netanyahu visited wounded Syrians at the Golan Heights. “I remember that the Syrian opposition then said that Netanyahu should stop using wounded Syrians for propaganda and other nonsense,” Dandachi recalls. “I told the opposition at the time: 'Are you crazy? You can't even say thank you?' It is so immature."

In December 2015, Dandachi decided it was time to act, to proclaim “thank you” to Jews and Israelis in any way he could.

He set up a new website, posting: “It is said that one of the truest moral tests of a society is in how it treats those in need, and who have nothing to offer in return save for gratitude. It is a challenge that this generation of Israelis and Jews have met with exemplary generosity and charity, and it is that generosity that Thank You Am Israel was set up in acknowledgment and appreciation of. Thank you to the people of Israel and the Jewish people the world over, for showing kindness and charity to Syrians, whether it is through your IDF medical teams, your aid workers in Greece and the Balkans, or your congregations in North America raising money to aid and sponsor Syrian refugees. God bless you and protect you.”

Dandachi began to post articles describing ways in which Israeli and Jewish organizations are mobilizing to help.

“More assistance has been provided to besieged Syrians by the small group of Israeli volunteers than the entire UN has managed.”

One recent post profiled IL4Syria, an Israeli NGO that has mobilized 200 volunteers to provide aid in Syria, often at great personal risk. Volunteers have donated supplies for 17 field hospitals, helped train Syrian civil defense volunteers, distributed chemical suits for doctors treating victims of poison gas attacks, and donated 3D printers to manufacture prosthetic limbs. “More assistance has been provided to besieged Syrians by the small group of Israeli volunteers than the entire UN has managed,” Dandachi declared with his customary bluntness, calling it “one of the greatest feats of humanitarian assistance ever carried out.”

Another recent post described another Israeli NGO, IsraAID, which has sent team of medical and aid volunteers to aid Syrian refugees in Europe, providing medical care, warm clothing, food and encouragement. “The comfort and relief a refugee experiences on finding Arabic speakers among the rescue team cannot be overstated,” Dandachi explains.

Other posts have highlighted efforts by Jewish groups around the world to help Syrian refugees. Describing a Canadian-Jewish program to sponsor and help Syrian refugee families in Canada, Dandachi calls it “miraculous” that Jews are mobilizing to assist people from a region that traditionally was hostile to Jews and Israel. Other programs detailed include Operation Ezra, a program of the Winnipeg Jewish community to help save Yazidi families, and instances of Jewish communities in the United States raising money to help refugees.

As Dandanchi’s activities have begun to garner more attention, he has started to receive feedback from around the world. He receives lots of abuse on Twitter, but tries to ignore it. He has also received a great deal of support. “What surprised me is the feedback from Arabs. I was expecting hostility from Arabs and instead a surprising number have told me that I’m saying what they can’t say and that I should keep saying what I’m saying. It surprised me the number of Arabs and refugees like me who say that,” Dandachi explains. “Unfortunately, the reality in the Middle East is that there is no Arab politician who will say 'thank you' to Israel.”

“The fact is,” Dandanchi confides, “that Syrians don’t have many friends in the world left.” Abandoned by many of their former allies and supporters, and vilified in much of the world, Syrian refugees, he explains, have found a champion in many Jews and Israelis. "So, these are our darkest times, and it means we should appreciate the friends we do have right now. No one could have blamed Israelis and Jews if they had stayed aloof from the refugee crisis, but they didn’t. They risked a lot to help us. And the very least you can do is say thank you. To say thank you isn’t remarkable, one act of kindness is more remarkable than a hundred thank yous.”

Dandanchi hasn’t yet visited the Jewish state, although he would like to. He looks forward to a time when the war in Syria is over and is confident there can be peace between Syrians and Israelis. “The Israelis have shown tremendous goodwill towards Syrians, and it dwarfs any supposed reason we may have had to be adversaries. I hope both people realize that after the war in Syria is over.”

When asked what advice he has for those who want to help, Dandanchi is modest. He urges those who want to make a difference to support organizations that are working with Syrians, and singles out the Israeli NGO IsraAID as one example.

(Here is the link to his site: http://www.thankyouamisrael.com )

Conspiracies, Jews, and the Jewish State

Reunifying Jerusalem: Remembering Ammunition Hill
The 21st President of the United States: Failure or Inspiration?
Hiding Their Jewishness
The Jewish Pope: Following the Questions Home
Comments
MOST POPULAR IN Israel
Our privacy policy
Aish.com Is Looking for Great Writers