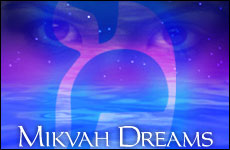 Going to the mikvah became an obsession. I wanted in even if I didn't know why.

I live on the unfashionable west side of Santa Fe, where the neighborhood is small and funky, adobe houses sitting in well-tended yards of flax and hollyhocks or the neglected ones of dirt and panic grass with a few old car parts thrown in. Old men stand watering the small laws with garden hoses innocent of nozzles. Every house has a dog, and every dog barks as I pass. This is a neighborhood visited by the moon and by drunks staggering from the liquor store; it is a neighborhood in which no one will win the lottery.

Within the blocks I walk, though, there is a passion of belief. My elderly neighbor Grace C. Baca wears a Virgin of Guadalupe pin; windows are numerous with the statues of saints dressed in rosaries. Down the block is the massage school for holistic healing, the Spanish Pentecostal Church, and turning the corner is my own husband, Robert, driving a Cherokee Jeep with a cracked windshield. He is a Zen Buddhist priest, head shaved, Bodhi beads wrapped around his wrist.

Around the corner, on Franklin Street, is my Hebrew teacher's house. As I walk I can feel prayer rise from the asphalt like mist after rain. My heart beats as I turn up her driveway and knock on her door. In this kitchen, on an old-fashioned lacy oilcloth, I have learned the Hebrew vowels and how to light the Shabbat candles; I have worried about Jacob's two wives and my own sister Rachel; I have learned an alphabet that once was forbidden.

I was raised to believe that although I was Jewish, and that this was a vastly superior way to be, religion itself was superstition and ignorance. My father instructed us: God is for children and morons, there is no God, and most important, my father decides what we believe. Without God, rabbi, or synagogue, my father's spiritual authority in the family was absolute. He controlled it all, and he proclaimed: You are an atheist.

"When the student is ready, the teacher appears."

I did not even dare to break the injunction until I was almost 40. Gradually I felt the pull. I put a mezuzah on my newly built studio. I told my friend Carol I was longing for something Jewish. When she told me there was a Hassidic woman who taught Kaballah literally around the corner from me, I knew I had to go study. When I called Yehudis and told her how surprised I was to find her, she said: "When the student is ready, the teacher appears."

As soon as I learn the Hebrew alphabet, I begin to dream. I see the letters, large and dark, rising up like gates over me as I turn in my sleep. I'm reading whatever I can get my hands on about Judaism and feminism, women, spirituality. I'm trying to find a place for myself in a tribe I felt was made of old men wrapped in tallises, with no place for me. I keep coming upon the idea of mikvah, a pool, water; it has my favorite letter "mem" in it, after all -- my name is Miriam with two "mems" in it, and Miriam's Well is a source of water, of inspiration, of healing, that follows me no matter how lost I am.

After Hebrew lessons, Yehudis takes me to her backyard to show me something, but somehow we get sidetracked, and she ends up opening the door to what I always assumed was a greenhouse. Inside it is a mikvah, a pool that appeared just for me. This is the only mikvah in New Mexico, perhaps the only one for a thousand miles. And it's right around the corner from me.

I go home thinking, "I have just got to get into it." It's becoming an obsession; I want in even if I don't know why. I start to dream about the mikvah, I can't shake the dreams. Finally I just tell Yehudis, "I want to get into this mikvah." I know there must be lots of rules, and there are. She tells me to read a book on how it's done. I start reading. I knew that I had to wait until my period, but I didn't quite realize I had to be celibate for at least twelve days.

I plop down next to my husband. I tell him I won't do this, it's ridiculous. But he is the one to encourage me and insist I do it properly. Here is a man who shaves his head and has a Japanese name, who has sat for seven days cross-legged facing a wall. He believes in ritual. He is also a Jewish boy from New Jersey. He has never been anything but positive about my foray into Judaism. It is as if he believes more than I do that it is right for me. "Twelve days," I tell him, half hoping he'll insist that I'm so irresistible it can't be done. But he tells me it's fine.

I don't like this period of separation, and I didn't learn much from it except for bad things I already knew -- I'm dependent and needy and scared of space. I don't think I need this mikvah for my marriage. After all, we've been together for a dozen years, we have a daughter, we've withstood sickness and death and mortgage. More important, because Robert has lived off and on in Zen monasteries and because I am a writer, there is some solitude built into the relationship, some chosen path.

So I continue -- not for my marriage, but for me. At least I have stopped dreaming every night about a mikvah I can't get into. When the right night arrives, I take a long bath and scrub with a loofah and fancy face scrub. I lounge. Sunset hits the corner of the bathroom window. I go to a Kaballah class at the shul, come home and get a towel, then drive to the mikvah around ten o'clock at night. I don't want to walk in this neighborhood at this hour. I'm singing in my blue Toyota, out of the house, out of time, out under the cover of darkness. I feel the way I did when I rushed to the birth of my friend Debora's son.

I'm full of joy, this is real, I'm in the pool, the pool is in me, this is where I belong.

The mikvah room seems to glow with blue light. I walk backward down the ladder into the pool. After the first immersion I can hardly breathe, my heart is pounding, my lungs seem to want water instead of air, everything is turning blue. I'm full of joy, this is real, I'm in the pool, the pool is in me, this is where I belong. Yehudis holds a scarf over my head, and I repeat the prayer after her. My mind is a blank; I couldn't do it myself. I go under again and again. Now I'm laughing and getting dressed, I'm going home.

It is Rosh Chodesh of Elul, a month to Rosh Hashanah. There is no moon in the sky. I did this to mark a conversion of sorts, of my own turning. I did this because secretly I hoped, secretly I knew or hoped I knew, that there was a place for me as a woman among Jews. This pool at Yehudis's house, marked with traces of New Mexico rain, was an entry way, a beginning. I went down into the pool, into the letter mem, into the moonless sky, into my name.

Why Menopause Doesn’t Bother Me Anymore
The Nobel Prize-Winning Neuroscientist Mussolini Couldn’t Stop
The Beauty Queen of Jerusalem: 6 Jewish Communities Who’ve Long Called Jerusalem Home
Why We Let Our Kids Draw on the Walls
Comments
MOST POPULAR IN Current Issues
Our privacy policy