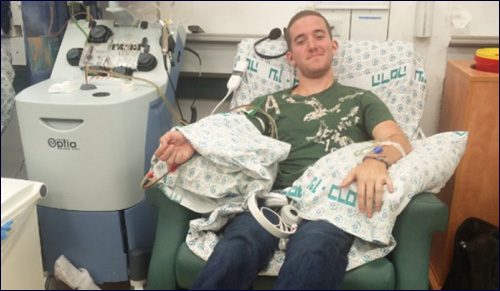 My life has drastically changed. But I’ve gone from depressed to optimistic, paralyzed to athletic, and most importantly, hopeless to hopeful.

“You have MS,” announced the neurologist flatly. It was Monday, October 26, 2015, 10:18 AM, but I remember it like it was yesterday. I was stretched out on a none-too-comfortable bed in the ER, at Sharei Zedek Hospital in Jerusalem.

I had arrived there after an odyssey that began the previous summer. A couple of days of dizziness that we thought was the flu turned into a lack of feeling in my stomach, which morphed into a loss of dexterity, and finally into full-fledged limping and slurring of words.

I asked the doctor, “Am I going to die?” I’d always seen myself as of above-average intelligence, fairly well read for my age at that, and, admittedly, a tad cocky. But I had no idea what that diagnosis meant. I’m not sure I had ever even heard of MS. 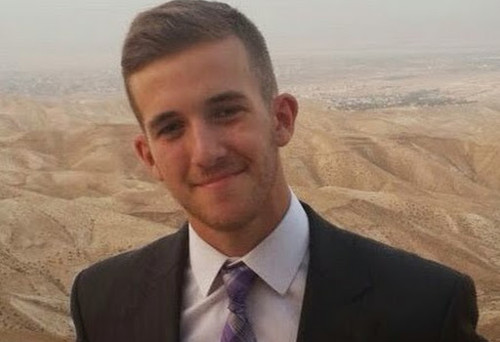 When the doctor departed, presumably to let me process the bombshell she had just delivered, and to order up the first of many steroid cocktails I would have pumped into my veins over the next few days, I remembered that I had one more question. I reached for my hospital-supplied walker and limped-ran after her.

“What about the army?” She looked down and just shook her head no.

I had my eyes on the elite forces in the IDF. Now my rosy world had come crashing down around me.

Everyone who knows me knows that I have always been a positive, and stubborn, person. Those traits aided me in making aliyah on my own at the age of 16, out of deeply ingrained Zionist ideals and a clearly defined goal to make a difference and help my people. For years, I had had my eyes on the elitist of the elite forces in the IDF, and I was working out zealously in preparation.

Now, for the first time in as long as I can remember, I cried. My rosy world had come crashing down around me. My upbeat outlook on life had taken a beating. My lifelong dreams of serving as a soldier in an elite combat unit in the IDF were dashed in an instant.

Still, I had to repress my despair. I had to call my parents in the US, and I didn’t want to cry on the phone. Afterwards in a blur, I called friends and relatives. I assured them all I would be fine, while inside I was frantic about my health, my happiness, and my future.

I was released from hospital on October 28, my birthday. My world as a 19-year-old was dramatically different from the world I had left behind at 18, and advancing age was not the reason. I suddenly had no certainty regarding anything.

But, I rallied. I knew that I could not let my new reality bring me down. Within one week, after a healthy dose of steroids, I returned to my yeshiva. I was received with the utmost love and support from everyone — rabbis, friends, and community members. This outpouring would become a theme throughout my journey, because no matter how alone I might have felt, I never was truly alone. In fact, I consider myself the “luckiest man on earth” for all of the support shown me by all those around me.

Yet, as I’m sure you can imagine, my life changed drastically. I was having attacks all too regularly, even though I was on medication with a proven record in fighting the disease. These less than sympathetic episodes left me unable to walk normally (or at all); they severely diminished my dexterity, they affected my mood, and resulted in myriad other disabilities.

Throughout, I was determined to keep a positive outlook and swore to myself that things would improve. How could they not? I had no reason not to trust my doctors or the rapidly developing research on medical treatments for MS, and I had the best support system anyone could ask for. 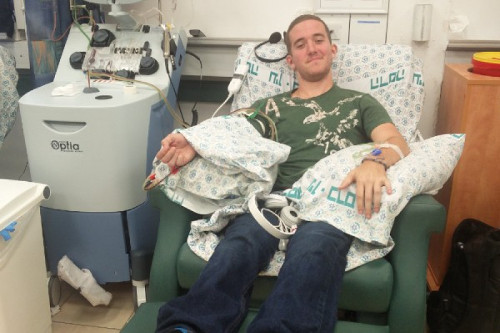 Ironically, the nadir of my challenge came together with the apex of my hopeful optimism, in October 2016. I was back in the hospital, this time arriving by ambulance on Shabbat. I had lost all movement in my body, several of my body functions were impaired (insert catheter joke here) and I knew that something terrible had happened. My emergency MRI confirmed the obvious, showing a massive new lesion responsible for an attack that occupied the better part of the next four months.

Sometimes, I felt hopeless, lacking control over my body and doubting if I was ever going to live a normal life again.

I spent nearly a month in the hospital, teetering on an emotional seesaw. Sometimes, I felt hopeless, lacking control over my body and doubting if I was ever going to live a normal life again. At other times, I felt completely alone, unable to truly express how I felt and unwilling to believe that anyone could empathize with me. I felt abandoned by people whom I thought I could trust and whom I thought were close friends. I was depressed, feeling as if I wasn’t contributing anything to the world other than pain, anguish, and a burden on others.

On the other hand, I also felt remarkably well-cared for by my mom and my brother, who flew in to be with me; by family who called and visited as much as they could; by doctors who took a genuine interest in me; by friends who went above and beyond what it generally means to be good friends; by teachers who took time out of their busy schedules and traveled up to two hours just to check up on me; by family friends who were there for me constantly in every possible way; and a collection of other good souls–including some amazing hospital staff and volunteers–who truly helped me during this time. I re-learned what it means to rely on others, and that help and comfort often come from the most unexpected quarters, like the hospital aide who came around to wheel me to my daily shower.

I felt inspired. I thought about things I never thought I would think about. I composed poetry about my ordeal and how I had chosen to cope. By the end of my hospital stay, rehab sessions, and follow-up appointments, I even felt optimistic again, hopeful that maybe I would be able to get my life back on track and return to being the happy-go-lucky, determined, and capable person I was used to being.

That feeling of confidence peaked when, together with some of the wonderful people at the MS Center at Hadassah Hospital, where I had transferred for treatment, I established the MS running team. We registered for the Jerusalem Marathon set to take place the following March, and dedicated ourselves to raising money and awareness for the groundbreaking research being done by the Center in developing a stem cell cure for MS (and hopefully ALS as well). By the end of January, I (somewhat foolishly) decided that I was well enough to run. I was overwhelmed by the outpouring of support, donations, and for good measure, another attack. I ran with one leg being barely functional, and celebrated back in the ER.

That was, to date, my last attack. In June, I was hospitalized once again, this time for treatment with a relatively new MS drug that has had good results in preventing attacks and even reducing brain and spine lesions. I will have to repeat the in-hospital treatment in another few months. But, with the help of my family, friends, doctors, and the Almighty, I have been lucky enough to regain control of my life during the past year. I went from depressed to optimistic, from paralyzed to athletic, and, most importantly, from hopeless to hopeful. I began my National Service commitment in the Ministry of Public Security and returned to a rigorous exercise regimen. I also began attending local classes and lectures in Torah and Talmud. In the summer, I travelled in Europe with friends en route to a visit with my family in the States. And I continued to look for ways in which I could help others as much as possible.

I am running in the Jerusalem Marathon again this year in order to raise money for the breakthrough treatment being conducted at Hadassah that may cure MS.

I learned a lot during this time, and I met a lot of people too, some of whom are not as hopeful or as lucky as I have been. Some have been wheelchair-bound for years. Some are young men who were on their way to budding careers in the army and had to switch tracks suddenly. Some are young women who went from worrying about their exams to worrying about their wellbeing. Some are fathers and mothers who have families to support and to care for. Many have lost the ability to walk, talk, or perform other basic functions that we daily take for granted. Many have lost hope.

So I’ve decided to run in the Jerusalem Marathon again this year — and organize another dedicated running team — in order to raise money for the breakthrough treatment being conducted at Hadassah that may cure MS, or at least result in large-scale regression. Hopefully, if all goes well, I may not need this treatment. But thousands of MS and ALS sufferers do.

I aspire to a shared fundraising goal of NIS 100,000, or approximately $28,000. If everyone who reads this, or has seen the donation platform, would donate even as modest a sum as $5, we will reach our goal and be one step closer to eliminating a debilitating disease from this earth. Perhaps then, by next year, or the year after, we will run in celebration, because the cure will have been found.

The Sounds of Silence

Reincarnation and the Holocaust

Next Year In Jerusalem, Part 1

Rabbi Akiva's Optimism
Grilled Israeli Lamb and Veggie Kabobs Recipe
How To Barbecue Like an Israeli
Pain is a Reality; Suffering is a Choice
Comments
MOST POPULAR IN Spiritual Odysseys
Our privacy policy