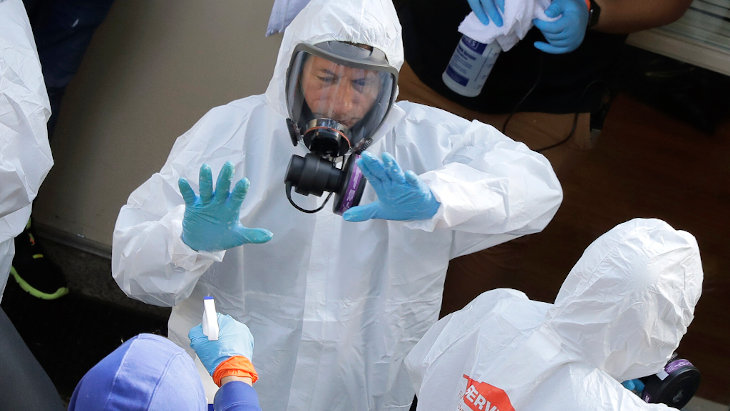 One out of five English people believe Jews are behind the coronavirus pandemic.

As the coronavirus pandemic continues to sweep through the world causing death and anxiety, an increasing number of people falsely – and terrifyingly – believe they have found a simple explanation: The Jews are somehow orchestrating this entire crisis.

False conspiracy theories about the pandemic “have largely built on previous prejudices and (past) conspiracy theories – including the long-held slanders that Jews somehow seek world domination and also the falsehood that Jews seek to poison or harm others." That’s the conclusion of Dr. Daniel Freeman, a professor of Clinical Psychology at the University of Oxford, and the lead researcher on a recent study that found that more one in five English people believe Jews are causing the pandemic.

Oxford researchers questioned thousands of English people about the coronavirus in May 2020. The study found that fully one in five English people concur with the false assertion that Jews are somehow behind the pandemic, saying that they agreed to varying extents with the statement “Jews have created the virus to collapse the economy for financial gain.” Only 80.8% of respondents said they did not agree with this statement at all. “In the wake of the epidemic, mistrust looks to have become mainstream," explained Prof. Freeman.

Jews weren’t the only minority group respondents blamed for the novel coronavirus; some respondents also were keen to blame Muslims, China and even their own British politicians. Yet from the beginning of this pandemic, Jews have played an outsize role in some conspiracy theorists’ fevered imaginations and have emerged as targets of vitriol and hate. “They are blaming the Jews (for coronavirus), accusing us of trying to destroy the economy in order to make money. They also accuse Israel of causing the virus,” Natan Sharansky said two months ago, when the world was still trying to get to grips with the pandemic.

Groundless accusations that Jews somehow invented the novel coronavirus have sprung up around the world, from traditional sources of anti-Jewish hatred like Iran, Turkey and the Palestinian Authority, to supposedly more tolerant and enlightened western countries including Britain and the United States.

Iranian television has openly accused “Zionist elements” of “develop(ing) a deadlier strain of coronavirus against Iran” and that the virus was “proof” that Israel was “waging biological warfare on a massive scale” by somehow inventing and spreading the virus. This bizarre and untrue allegation has been routinely aired on Iranian television and repeated on social media and in the press, creating a false impression through sheer repetition that somehow Israel and Jews are to blame for Covid-19.

Turkish politicians and newspapers have piled on accusations that Jews somehow invented the virus; observers note that it’s commonplace in much of the country to say that Jews are behind the pandemic. On March 6, 2020, Fatih Erbakan, the head of the Refah political party and the son of former Turkish Prime Minister Necmettin Erbakan, reportedly gave a speech in which he said that the pandemic was part of “Zionism’s goals of decreasing the number of people” worldwide. In a statement that illustrates the routine use of the word “Zionist” to mean Jew, Erbakan also called Zionism “a five-thousand-year-old bacteria that has caused the suffering of people”.

That description of Jews and Judaism as uniquely evil has long historical roots in Western Europe, dating back to Medieval blood libels in which Jews were accused of murdering Christian children and seeking to eat them or to drink their blood. It’s not hard to see echoes of the blood libel in today’s widespread slander of Jews as being behind the current pandemic.

Back in March 2020, when the coronavirus was first causing widespread shutdowns around the world, the Anti-Defamation League (ADL) documented dozens of cases of Jews being blamed around the world. In France, a far-right politician blamed Jews for causing the coronavirus. In Spain, a far-left Basque political party did the same. The ADL documented a far-right commentator in Switzerland who blamed Jews, and two far-left writers in Venezuela who did the same thing. Neo-Nazis in the United States have been falsely claiming that coronavirus is a Jewish plot for months, and have even encouraged adherents to try and infect Jews deliberately with the virus to make them sick. Slandering Jews knows no political bounds and grows in the shadow of ignorance and hate no matter what one’s political opinions.

Coronavirus has exposed deep wells of anti-Jewish hatred. This is the world our grandparents and great grandparents often faced, when the Jewish community was blamed and feared. It’s up to all of us today to respond with the same bravery and commitment that our Jewish forbearers showed when they too were blamed for plagues and disease. When faced with anti-Semitism and hate, they redoubled their commitment to live full Jewish lives. It’s up to each of us to do the same today.