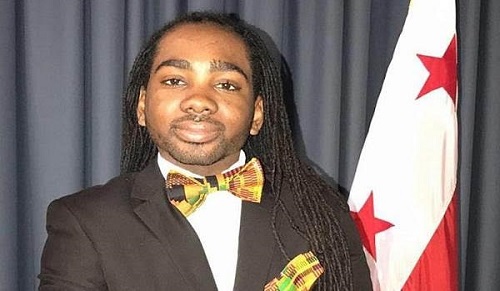 Just in time for the historical season of blood libels.

When Trayon White, a 33-year-old up and coming Washington DC City Council member, drove through a recent snow flurry, he decided to let everyone know just what he thought was behind the sudden snow storm: he blamed Jews.

Steering his car through the city streets, White filmed himself musing, “Man, it just started snowing out of nowhere this morning, man” and, bizarrely, went on to blame a prominent Jewish banking family for the snow: “...that’s a model based off the Rothschilds controlling the climate to create natural disasters they can pay for to own the cities, man.  Be careful.” He then posted his rambling speech on Facebook.

As astonished critics called on White to apologize, he initially defended his outrageous statements before posting an apology on social media a few hours later.  “I work hard every day to combat racism and prejudices of all kinds. I want to apologize to the Jewish community and anyone I have offended….I did not intend to be anti-Semitic…”

This wasn’t the first time White blamed Jews for natural events. He tried to link the Rothschild family to a Washington DC office charged with responding to emergencies such as severe storms at a meeting with the District’s mayor last month.

Startlingly, White doesn’t seem to be the only one peddling these kooky theories about Jews. The Washington Post noted that fringe conspiracy theorists have been peddling the outrageously false claim that Jews are responsible for climate change for some time.  As far back as 2010, the Southern Poverty Law Center noted that neo-Nazis were beginning to blame Jews for climate change; increasingly, this bogus claim seems to have gained even more followers in the years since.

While it seems incredible that anyone would blame Jews for snow, there are plenty of Americans who hold extremely negative views about Jews.  The Anti-Defamation League (ADL) notes that in 2016, fully 20% of Americans polled agreed with statements that Jews controlled Wall Street and had too much power in business.  16% agreed that Jews have “too much power” in America. Among minorities, the numbers were even higher. 31% of foreign-born Hispanics held strongly anti-Jewish views in 2016, as did 23% of African Americans. And a 2009 ADL poll found that 31% of Europeans blamed Israel for the financial crisis that year.

It’s ironic that Councilman White’s idiotic, offensive and utterly false comments about Jews occurred in the run-up to Passover, a common time throughout history to smear Jews with the infamous blood libel.

Nearly a thousand years ago, at Passover time in 1144, a young boy named William was found murdered in the English town of Norwich.  Even though there was no evidence, a local monk baselessly blamed Jews and falsely claimed that Jews selected an innocent Christian child each year to ritually murder.  At first, few people paid any attention to this gory fabrication, but the monk kept embroidering his telling, adding more and more gruesome details. In time, some Christians began venerating the murdered boy, who was eventually canonized as a Saint.  Local Jews, already viewed with suspicion by their Christian neighbors, were blamed for his death, and Jews were seen as uniquely evil, bent on causing unimaginable harm.

The untrue libel ultimately spread that Jews supposedly murdered Christian children in order to use their blood on Passover, either by drinking it during the Passover Seder or by using it as a key ingredient in matzah.  Jews across Europe were blamed for the death of Christian children. Often, local officials tortured Jews into falsely confessing these crimes. At times, Jewish communities were massacred in retaliation for supposed ritual murders before Passover.  Over a hundred blood libels resulted in thousands of deaths of European Jews throughout the Middle Ages. As recently as 1913, Russia tried Mendel Beilis, a Jewish father of five, accusing him of ritually murdering a boy and using his blood to bake matzah.

Allegations of blood libels continue to be repeated today.  Prominent political and cultural figures in parts of the Arab world routinely accuse Jews of killing children for Passover, and a couple of popular made-for-TV dramas in recent years have featured blood libels.  The wildly popular Syrian-made series Al-Shatat even features a graphic depiction ritual murder by supposedly venal Jews wishing to make Passover matzah.  The series has been shown repeatedly, since it was made in 2002, in Syria, Iran, Libya and Jordan, and remains a well-liked series throughout the Arabic-speaking world.

In the West, the traditional blood libel has modified, leading to baseless charges that Jews somehow want to control or harm others.  In 2009, the Swedish magazine Aftonbladet echoed classic blood libel smears when it falsely claimed that Israel harvested organs from dead Palestinians.  The following year when an earthquake devastated Haiti, a member of Britain’s House of Lords baselessly demanded an inquiry to see whether Israeli rescue workers were using the disaster as cover to harvest organs in Haiti.

Councilman White’s inane speculation that Jews caused it to snow is being mocked across social media.  Amid the ridicule, it’s important that we not lose sight that his hare-brained comments likely would not have occurred were it not for a fertile environment of anti-Semitic theories and hatred.  As we prepare to celebrate Passover, it’s imperative we remember the smears and false allegations, the hatred and ire stirred up by hundreds of years of blood libels. It’s vital that we stand up to Jew-hatred wherever it occurs, that we help stop modern blood libels of supposed Jewish evil or control, whenever we hear them today.

Who are the Jewish Athletes at the Tokyo Olympics?
Don’t Believe in Other Gods Versus God is One
Seeing Without Eyes
Why Shouldn’t We Eat Whatever We Want?
Comments
MOST POPULAR IN Israel
Our privacy policy
Aish.com Is Looking for Great Writers