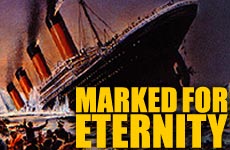 A true "Jewish" story from the Titanic's ill-fated voyage.

April 2012 marks the 100th anniversary of the Titanic disaster. I had never heard of a ‘Jewish story’ regarding the Titanic, thus when Mrs. Alyssa Hershkop in Beit Shemesh, Israel, insisted that she had a “great Jewish story” about the Titanic, I was skeptical. However, research and interviews with descendants of the passengers on that voyage proved she was right. A remarkable episode with Jewish overtones did indeed transpire on that fateful trip. The emotion roused by this story is truly ― yes ― of titanic proportions.

In 1910, Mr. Sam Aks of Turek, Poland, immigrated to England where he married the former Leah Rosen. They lived in London for a while after their wedding, and they decided to move to America where there were better business opportunities. They settled on moving to Norfolk, Virginia.

By this time Leah was expecting their first child and her parents felt strongly that in her condition she should not make such an arduous trip across the ocean. They felt it would be too exhausting for her and dangerous for the unborn child. It was decided that Sam would travel alone, set up a home in Norfolk and a few months after the child was born, Leah would come with the infant.

The newspapers and media at the time were ablaze with the news of the opulent, gigantic ocean liner, the Titanic, that was to make its historic maiden voyage from Southampton, England to New York City, in April of 1912. The White Star Line, the Flagship Company of the Titanic, confidently claimed that their luxury liner was safe, sturdy and even majestic.

On April 10, Mrs. Leah Aks and her baby, with 912 other passengers, boarded the ship in Southampton, England, accompanied by hoopla, fanfare and ceremony. Leah and her infant were in steerage, the third class cabin, with many other immigrants to America. The high society wealthy people were in the luxurious first class cabins. More passengers boarded at other ports before the Titanic crossed the ocean.

Four days later, shortly before midnight on April 14, as the ship was 95 miles south of the Grand Banks in Newfoundland, it sideswiped and crashed into an iceberg that towered a hundred feet over the deck...

Twenty minutes later, after consulting with the ship’s designer, Thomas Andrews, Captain Edward Smith realized that the ship would sink within two hours. Everyone on board would lose their lives unless they could get on lifeboats and be rescued by passing ships.

Incredibly, there were not enough spaces in the lifeboats for everyone. Though there were 2200 passengers and crew on board, there was room for only 1178 on the lifeboats. More than a thousand people would surely die! One is astounded at the negligence of not being prepared for disaster. As the boat began tilting there was panic and pandemonium. The captain and crew ordered that women and children would be saved first.

In the third class cabin, women were ordered to the front and men to the rear. Leah Aks held her son Frank Philip (Ephraim Fishel), in her arms and tried to get out onto the deck, but the gate in front of the cabin jammed and no one could get out. She stood pressed against the gate, screaming for help. A sailor saw her with her baby in her arms and he reached over the gate and lifted her and the child out, so that she could run to the deck where women and children were being put into lifeboats. (Most of the people in the third class cabin could not get out and 75% of them drowned. The first class cabin fared better, as only 40% died).

Leah ran up to the deck with her child and waited by the railing, trying to get on line to be rescued. It was frighteningly cold. People were shoving and pushing frantically trying to get onto lifeboats. Meanwhile down below, water poured thunderously through the gaping holes, flooding the bottom of the ship.

As Leah stood on the deck, one if the wealthiest women on board, Lady Madeleine Astor, saw her and the baby huddled against the cold. Lady Astor, who was expecting a child, removed her beautiful eight-foot shawl and gave it to Leah saying, “Here wrap your baby, it’s so cold out here.” Her teeth chattering, Leah thanked her profusely.

During this time, a man had pushed onto a lifeboat that was about to be lowered into the water. When cabin stewards saw him, they forced him out of the boat and pulled him back on deck, yelling that women and children were being rescued first. Somehow this man managed to get onto another lifeboat and once again the stewards saw him and forced him off the lifeboat, fighting with him, as they insisted that women and children were being given priority.

He grabbed the infant from her arms and threw him overboard!

Back on the deck, the man saw Leah standing there with her baby now wrapped in the shawl. He was enraged. His eyes were wild as he stalked back and forth consumed by anger and frustration. In a demented moment of madness he ran towards Leah and screamed, “You think women are first! You think children are first! I’ll show you,” and he grabbed the infant from Leah’s arms and threw him overboard!

Leah shrieked in horror and cried out for her child. Men on board lunged at this maniac but the deed had been done. People were yelling and screaming ― but now it was Leah’s turn to get on a lifeboat. “I won’t go without my baby,” she cried. But the officers told her she had to save her own life. There was no point in staying on the sinking ship. The women around her tried to console her, but Leah cried hysterically as she was placed on the lifeboat and lowered into the water.

The lifeboats drifted for three hours until the Cunard liner, the Carpathia, came and rescued those who were fortunate enough to get off the Titanic. Only 705 were saved, 1523 people died.

Two days later, the grief-stricken Leah Aks was walking on the deck of the Carpathia when she saw a woman holding a child. The child lunged towards Leah. She recognized him. Leah screamed, “That’s my baby! That’s my child!”

The woman holding the child, Mrs. Elizabeth Ramell Nye, was dressed in a long black dress. “No it’s not,” she insisted. “This child was entrusted to me!” (Others contend the woman was possibly Aryene del Carlo from Italy.)

A wild argument ensued and Mrs. Nye claimed that while she was in the lifeboat, a child came flying into her waiting arms. To her that was a sign from Heaven that she had to care for the child the rest of her life.

People took sides in the argument. Soon the captain of the Carpathia, Arthur H. Rostron, was called to decide the issue. Leah was crying hysterically while Mrs. Nye was insisting her position. She would not be denied this child.

When Captain Rostron arrived and heard the points of the argument, he told both women to come with the child to his quarters where he could reflect and decide the matter.

"I can prove this is my child!"

In the captain’s quarters, Leah suddenly called out, “I can prove this is my child.” The 18-year-old Leah spoke firmly and with certainty, “I am Jewish and my son was circumcised!” In Europe at that time, only Jewish children were circumcised.

When Captain Rostron saw that indeed the child had had a bris, ten-month-old Ephraim Fishel was reunited with his mother. Eventually the Carpathia brought all the survivors to New York.

Frank Philip Aks was raised in his rightful Jewish home. Eventually he married and had children and grandchildren. Frank passed away in 1991 at the age of 80. His wife, Marie, recently told me that as a youngster he would walk for miles on Shabbat to daven in the Orthodox shul in Norfolk, known as the Cumberland Street Shul.

After the traumatic events of the ill-fated journey, Leah was so grateful to Captain Rostron and his crew that years later when she had a daughter she named her Sarah Carpathia Aks. Incredibly there was some confusion among the hospital secretaries and they recorded her name on her birth certificate as Sarah Titanic Aks!

When I told this story to Rabbi Dovid Cohen of Brooklyn, he showed me the following Midrash (Bereishis Rabbah 42:8 and 44:7).

When God told Abraham to circumcise himself, Abraham consulted with three of his friends and confidants, Aner, Eshkol and Mamrei.

Aner said, "You are [nearly] 100 years old, will you now risk your life by inflicting such pain to yourself?" Eshkol said, "Would you dare [put such an indelible] mark on yourself [and thereby look obviously different] from all your enemies? [That alone could be life threatening.]"

Mamrei was the only one who encouraged Abraham to have faith in God and follow His direction.

Said Rabbi Cohen: "Isn't it noteworthy, that the mark that Eshkol thought would bring scorn on Abraham and even endanger his life, was just the mark that reunited this child with his mother and saved him, so that he would be raised with his family as a Jewish child?

Reprinted with permission from "Reflections of the Maggid (ArtScroll.com)

Rabbi Paysach J. Krohn is a fifth generation Mohel in New York. He has authored "Bris Milah" and a series of five "MAGGID" books, collections of inspirational Jewish short stories and parables. He can be reached at (718) 846-6900 or via e-mail at krohnmohel@brisquest.com.