Letters from My Great-Grandmother 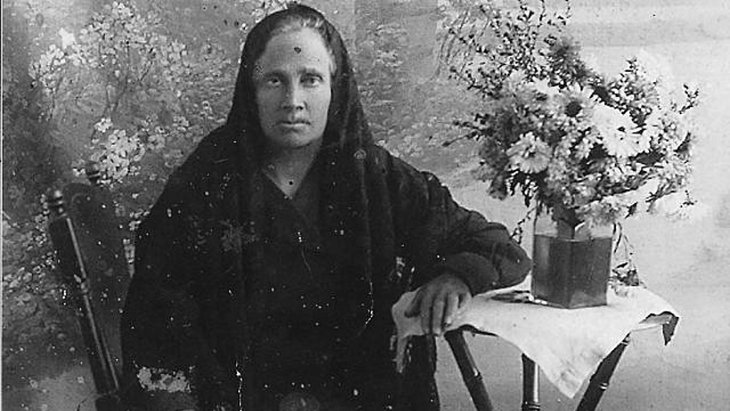 Inspired by Bubbe Esther’s piety, I ventured to the Ukrainian shtetls where she lived and perished in 1941.

Growing up, I was blessed. My parents afforded me a yeshiva day school education, and at 13, I took on full observance. I felt proud to be carrying on a long heritage of observance. But the way I thought about the world and the lifestyle I chose made me unlike anyone else in my entire extended family. I yearned to have a connection with someone way back in the family line who had been observant, but resigned myself to the reality that I would never know anything about them. I was like a character out of the Wizard of Oz: if I only had a past.

Just a year ago, I was blessed again. Out of thin air, a distant cousin surfaced from the Ural Mountains in central Russia with a trove of pre-war letters and photographs from my mother’s family, including Bubbe Esther, my grandfather’s mother – the last observant member of my family. For a year, I pored over her photos and the translations of her Yiddish letters, adopting her as my new-found bubbe. 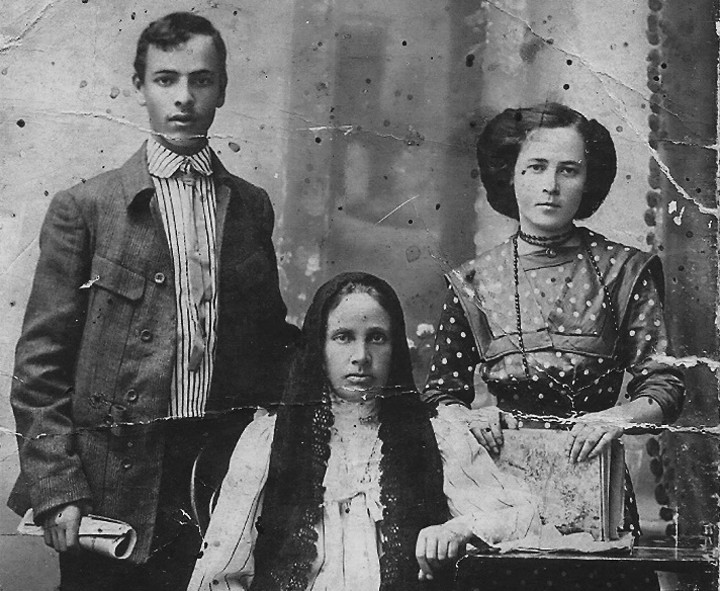 My grandfather and his sister, both standing, with their mother, Bubbe Esther. (Courtesy)

Bubbe Esther had a hard life. Like the previous three generations of the family, she lived in a small Jewish farming colony in the southern Ukraine called Bobrovy Kut – Russian, for, of all things, “Beaver Creek.” Her entire life was spent within a 70 kilometer radius of this place of her birth.

In her 30s, tragedy struck: the Almighty took her husband and the creditor her horse and wagon. Penniless, she struggled to raise seven orphans. I like the photo above from 1907. My grandfather (on the left) and his sister sport modern clothes and hairstyles – all seven siblings together with a whole generation drifted away from tradition – while Bubbe Esther still covered her hair as a widow. My grandfather left for Canada in 1912 with the plan to get settled and then bring everyone over. But over the next 30 years the Jews of the Ukraine were struck with a Seder-like series of plagues: World War. Revolution. Soviet brutality. Pogroms. Famine. Epidemics… Einsatzgruppen.

The letters were all that remained.

I was thrilled to receive today the letter you sent two months ago. I haven’t written in a long time because a registered letter costs two-thousand rubles. I’ll describe you briefly our life: it is very hard to make ends meet. We have two horses; one is one-year old and the other is ill and has been standing in the stall for two month. But unzer Got iz a guter Got – our God is a good God. It is now just days before Yom Kippur and I wish you a gut yor.

I longed to feel her piety and set off with one of my sons to this distant place, Bobrovy Kut. From the small city of Kherson on the Black Sea, we drove for hours through the vast Ukrainian prairie. Bobrovy Kut is a sleepy run-down village. Free roaming roosters outnumber residents. We made our way to the remains of the shtetl shul, its roof long gone. 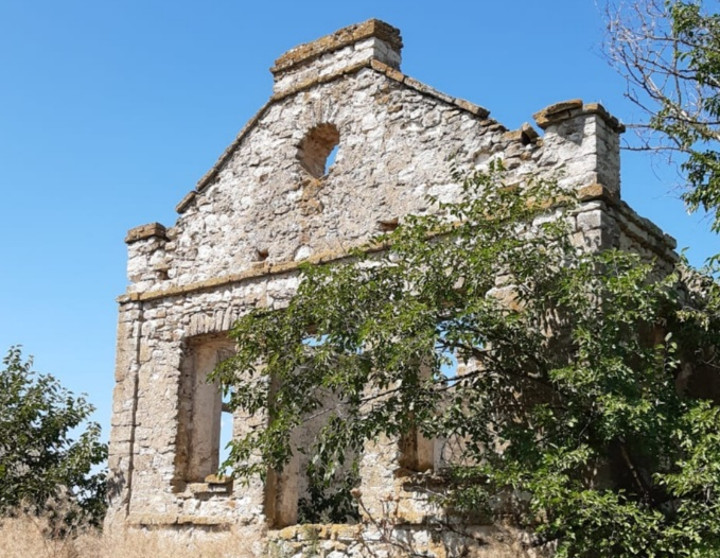 The shell of the shul. (Yakir Berman)

Wading through tall weeds, I entered the shrine of the shul, beer bottles crackling under my steps as I went. I stood still for a long time. Had my great-grandfather davened in this place? I yearned to find some Hebrew or Yiddish writing, even a part of an inscription, but there was nothing. Our Ukrainian guide, who had visited here before, pointed to a bare, framed part of the wall. “Two years ago there was an inscription here,” he said. “But I guess it’s been vandalized since.” I felt robbed.

I walked down from the shul to the bank of the Inhulets River, whose calm and shimmering waters curve slowly around the village. Had Bubbe Esther used these waters as her mikveh? Still yearning to find some Hebrew writing to latch onto, I sought out the old Jewish cemetery. A Ukrainian babushka obliged and led us to the edge of the village. Spreading her arms out she said, “All this was the Jewish cemetery.” But “all this” pointed to nothingness; no tombstones, or even pieces of tombstones. Those had long been taken for other uses. I felt robbed again.

My dear son, you ask me about what I need. I don’t need luxuries; even food and clothes are very difficult for me to buy. I can go without bread, but your sister Rochel and I don’t have underwear and our outerwear is very old. Rochel isn’t a small child; she’s 19 and she needs something to wear outside. But I don’t have any money for this. Your brother Moishe doesn’t earn much. He gives me bread sometimes, and I can’t ask anything else. A woman who recently moved here got a parcel from America with clothes, shoes and food. But I don’t think you should send food. 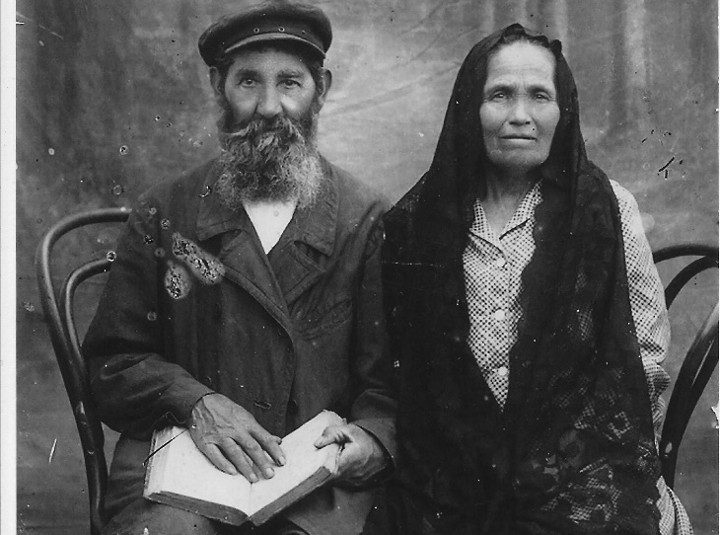 After 30 years of widowhood, poverty and moving from the house of one grown child to the next, Bubbe Esther remarried – more for financial stability than out of love. Mendel lived in Romanivka, another Jewish farming colony even more remote than Bobrovy Kut. Our SUV rolled into Romanivka where we discovered a virtual ghost town. Nearly all of its residents before the war had been Jewish. The landscape around us was dotted with dilapidated Jewish homes and the shell of an enormous shul. 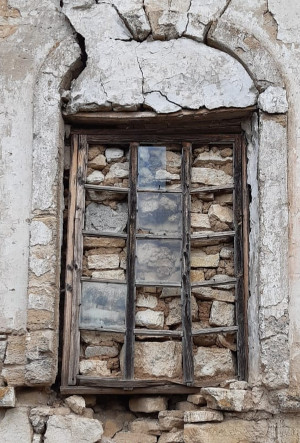 The remains of the shul in Romanivka. (Yakir Berman)

I approached one of the shul’s windows. Some of the glass panes were still in place. I recalled that Mendel was a glazier and wondered: Had he fashioned these? I ran my finger over the glass panes. Was I here just one degree of separation removed from my Bubbe Esther?

We found a 93-year old man. During the great Ukrainian famine of the 1930s, he recalled fondly, Jewish families had opened their doors and taken them in. He shared several Yiddish phrases he had learned, and rattled off the names of his Jewish teenage friends later murdered in the massacre there. Still searching for some piece of observance to latch on to, I asked him if he had memories of people wearing yarmulkes or with beards. “Nah,” he said. “They were all just like us.”

I thought of the photo of Bubbe Esther and her husband Mendel, probably taken at their wedding in the 1930s. Bubbe Esther still had her hair covered, and the man she married had a full beard, and chose to be photographed with a sefer in his hands. For this, Bubbe Esther and Mendel are my heroes. They were among the few still holding true to the tradition.

We drove out to the mass grave of Romanivka’s Jews, murdered in 1941. I drew near and was overcome with a sense of Bubbe Esther’s closeness.

I finally had a past. 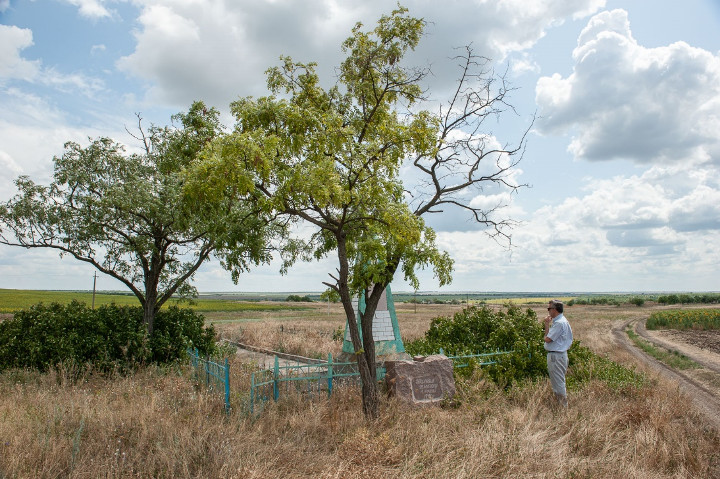 I looked out over the vast prairie. All that remained now was to write Bubbe Esther a letter myself:

Dear Bubbe Esther,
We have two cars; both are in fine operating order. Bread? Yes, that too. Actually, we can eat anything we want to our hearts content. It is just days before Tisha B’Av and I have never felt the churban more deeply than standing here with you. It is so much easier for us than it was for you to say the words, unzer Got iz a guter Got. Things are so good, we don’t need packages from America. We’ve brought ourselves from there to the land of our fathers, and there is no place like home.

Pirate for a Day

Our Miraculous Escape from the 2017 California Firestorm

Next Year in Jerusalem, Part 2