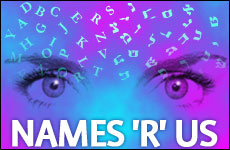 My journey from "plain" Susan to "exotic" Batsheva.

About a week before Passover I was in the park with my toddler enjoying a beautiful day. He was running and bouncing around with his usual smile and giggles, when suddenly, a kid that was passing by stopped and hit my sweet child for no particular reason. The incident barely blipped on my son's radar; however, I was a bit stunned. The boy's mother seemed pretty mortified, but I just had to laugh after I heard her yell out to her child, "Ramsey, why did you hit that boy?"

I thought to myself, "Well, of course he would strike my son." His name is Ramsey. And my son's name is Tuvia Moshe (the name Tuvia is traditionally known as another name of Moses). So just before Passover, it figures that a kid with Pharaoh's name, Ramsey, would smack a kid with not one, but two names of the redeemer of the children of Israel!

But then I thought, "Why would someone name their son after the Pharaoh of Egypt?" After all, names are such an important part of who we are and the way people perceive us. In fact, the Talmud says that a person's name can determine his or her lot in life (Berachot 7b). Even though we can cancel out both the negative and positive tendencies associated with our names through our behavior and attitude, our names count.

Although many Jewish children have just a Hebrew name like my son, it is more common in America to give a Jewish child two names -- one in English and one in Hebrew. When I was growing up, my friends and I used our English names. The only people who ever called us our Hebrew names were our Hebrew school teachers.

Because my English name, Susan, was quite common when I was growing up, I didn't much like it. I thought it was boring, and I knew I didn't want to lead a boring life. I always wished I had a different name, something exotic like my older brother, Shayle. Now his was a name. And that's what I wanted, a name that set me apart.

The first time as an adult that I ever used my "other" name, Batsheva, I was taking an evening class in beginning Hebrew. I thought this the perfect opportunity to try it. Then one day, as I was sitting in a restaurant enjoying a quiet lunch with a friend, a woman came up to us and started yelling something very loudly in my face. I finally realized she was saying, "Batsheva, Batsheva!" She was from my Hebrew class, and had apparently been screaming my name across the restaurant for some time, only I didn't hear her. "Batsheva" didn't register as having anything to do with me. Batsheva was the beautiful wise wife of no less than King David himself, not to mention the mother of King Solomon. Was I a fraud to be using this name? That's how it felt to me.

Years later, some of my girlfriends switched to using their Hebrew names exclusively. They had heard the idea that by using their "true" name, their soul mate would more easily recognize their "true" essence. Beautiful idea. Did it work? Well, eventually they all got married, but so did my non-name changing friends, so I was not convinced.

When naming a child, a parent senses the inner nature of the child's soul.

Then finally, in my late 30's, with one broken engagement behind me, and no soul mate in sight, I started toying with the idea of permanently using my "true" name, Batsheva. It was difficult for me, because I didn't really feel worthy of Batsheva. I felt that Susan was a friendly, plain name that carried with it no expectations of grandeur. Batsheva seemed beautiful and represented greatness. Really, what were my parents thinking giving me this name?

But that's just it. My parents had what all parents have when they name their children -- a little taste of prophecy. According to our sages, when naming a child, a parent senses the inner nature of the child's soul. Hebrew names are our spiritual connection to God and the key to our Jewish identity. In fact, when the Children of Israel suffered for more than 200 years as slaves in Egypt, basically assimilating into the surrounding idol worshipping society, the only distinctions they kept were their names, their language and their way of dressing. And these distinctions were enough to merit redemption.

So maybe my parents knew something I didn't. And I figured, even if I didn't feel worthy of my Hebrew name at that very moment, maybe the point was to take on the name first and then work on becoming Batsheva. This would mean striving to be a better person in all situations and to seek someone worthy of being my king-- someone who would always treat me like his queen. And of course, this would also mean constantly having to spell and pronounce my "unusual" name to others.

After almost five years as Batsheva, as difficult as it's been for family and friends to make the change, I feel completely at home in the palace.

In fact, the other day I heard someone screaming down the street. I was trying to ignore the half-crazed person, but she just kept getting closer. Finally, I turned around only to spot an old friend I hadn't seen in about six years. She had been frantically yelling, "Susan! Susan!" all the way down the block. Only I didn't hear her. Because even though I still have to work on myself daily, I had become Batsheva.

When Britain Interned Jewish Refugees
Bechukotai 5782: Divine Retribution
Behar 5782: Working to Live or Living to Work?
The Wholeness of Being Broken
Comments
MOST POPULAR IN Jewish Society
Our privacy policy