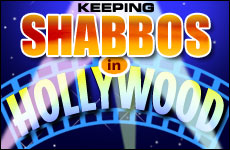 I thought they said, "You'll never work in this town again!" only in old movies.

Shortly after I first started keeping Shabbos, I got my first job as a staff writer on a sit-com. It was the 99th rated show out of 99 in prime time. Not that this has anything to do with the story, I've just always thought that was cool.

There wasn't much to do the first week, and it was August when the sun sets relatively late, so we finished work before there was any conflict. The second week was different. Friday rolled around and we were finishing just in time for me to be able to make it home for candle lighting. I lived close to the studio, so as long as we wrapped it up quickly, I'd make it home by the skin of my teeth.

It was one of those meetings that wanted desperately to end. However, each time it was about to, someone invariably raised another point. And then another. I was sitting in front of a large picture window watching the sun get lower and lower in the sky. It finally came to the point that if I didn't leave right away I wasn't going to make it.

I didn't know what to say or do. Having had no previous experience keeping Shabbos in the work place, I hadn't thought of raising it with my Executive Producers earlier. This much I knew, several minutes before sundown was not the time to launch into a discourse about my religious beliefs. In other words, I was stuck. So, I did the only thing I could think of. I got up, and without any ceremony, I left. They must have thought I was going to the bathroom. But I never came back.

Running to the car, I remember thinking that for a day of rest, this was causing a lot of anxiety. I had to talk to my Executive Producers, explain my situation, and hope they'd be supportive.

After the weekend, I went in with my partner, and asked if I could leave a few hours early Friday night so that I could keep the Sabbath. They said, "No". Then they asked if I still wanted to do this, because if I did, they were going to replace me. In other words, work on Shabbos, or you're fired.

This was an amazing moment. Hollywood moguls are famous for saying, "You'll never work in this town again!" – but I thought that only happened in old movies. Now, here I was, and not only was someone actually saying it – they were saying it to me!

The next day I told my partner I wasn't going to work. He understood, but he told me that he was going to try and stay on the show without me. I didn't blame him. After all, he wasn't even Jewish. Not only that, but people try for years to break into sitcom. This was a big break for him too, and he had every right to see what it might lead to.

In many respects this was the most critical moment of my life. I had been extraordinarily blessed. I had achieved my goal of going to Harvard College, writing for the Lampoon, and breaking into Hollywood. But despite all this, something was missing.

Relating to this, I heard a teaching that for years I thought came from a great nineteenth century Hassidic Master. Later I learned it was from a tattooed biker in recovery. Not only doesn't that take anything away from the insight, I think it makes it even more relatable.

He said, "all of us are created with a God shaped hole inside of us." We try to fill it with career achievements, drugs, relationships, money, but none of these things fill it except God, precisely because it's a God shaped hole.

I needed to know where "success" was taking me, and perhaps even more importantly, where it was stopping me from going.

Modern society cynically views religion as a crutch, but nothing could be further from the truth. The quest for spirituality is an expression of a longing built into us by God Himself. For some us that inner voice becomes loudest during tragic times. For others, me included, it becomes clearest during times of plenty. It says, all these opportunities are great – but there has to be something more to life!

I no longer had confidence that blindly climbing the ladder of success was going to lead me to better and better places. I needed to know where "success" was taking me, and perhaps even more importantly, where it was stopping me from going. I realized then that if I couldn't take my soul along on the journey, then no matter how far I got, it was ultimately a dead end.

The pressure was definitely building. I was about to lose my job, my partner, and I was told that I wouldn't work in television again. But somehow, despite this, I remained calm. Maybe I wouldn't work in my chosen field, but in my heart, I knew that nothing bad was going to come from keeping Shabbos.

My agents marched in, and met with the studio head, and the Executive Producers. To my amazement, behind closed doors, all of the parties actually turned out to be respectful and supportive.

Now before I accept a job I always discuss Shabbos. Despite the stereotypes people have of the entertainment industry, I've been consistently touched by how positively both Jews and non-Jews alike respond.

Judaism teaches that when you're in the middle of a hardship you'd give anything to have it go away. But if you get through it successfully, you wouldn't exchange the experience for anything. God gave me a great gift. He could have made the entire process easy for me. But instead, He gave me the opportunity to take a stand for what I believe in. Perhaps for this reason, this remains for me the proudest moment of my life.

Since then, life has never been the same. Come sundown Friday, no matter what's going on, no matter how busy I am, everything disappears and the only thing that remains is Shabbos. Holy Shabbos.

David Sacks is an Emmy award winning writer producer. His weekly podcasts are available at Torahonitunes.com.

After 500 Years, My Family's Return to Judaism

Remembering My Father, Rabbi Noach Weinberg
Blessing on Chewing Gum
Was Rahab a Prostitute?
Extras In Our Own Epic
Comments
MOST POPULAR IN Spirituality
Our privacy policy