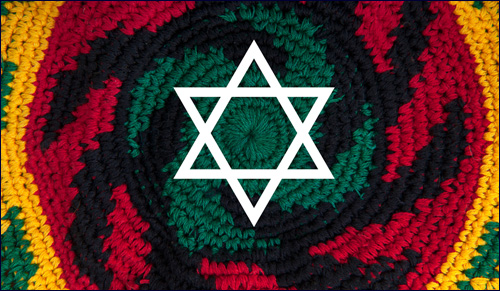 Jamaica, one of the world’s most popular tourist destinations, has a fascinating Jewish history going back centuries. Here are eight little-known facts about Jews in Jamaica.

1. Haven from the Inquisition

Christopher Columbus visited Jamaica on his second trip to the New World and in 1503 claimed it for Spain. The island was granted to Columbus’ descendants as a personal possession.

Defying the Spanish Inquisition (which mandated death to anyone practicing Judaism), in 1530 Columbus’ grandson Portugallo Colon allowed “secret” Jews to settle on the island. These were Jews who, despite the Inquisition, continued to practice Jewish rituals in secret and lead Jewish lives behind closed doors. In Spain, Portugal, and most of these countries’ colonies, the Inquisition hounded these Jews mercilessly, torturing and killing anyone found partaking of Jewish traditions. In the new colony of Jamaica, however, Colon prevented the Inquisition from operating.

2. Returning to Judaism under British Rule

In the mid-1600s, when Spanish authorities threatened to wrest control of Jamaica away from Christopher Columbus’ family and impose the Inquisition there, Jamaica’s Jews mobilized. Writing to England’s leader Oliver Cromwell, Jamaica’s Jews pledged to help England conquer the island from Spain. English ships arriving in Jamaica’s harbors were met by Jews who promised their help as Britain battled Spain. By 1655, England ruled Jamaica.

Jamaica’s Jewish community flourished. No longer forced to practice Judaism in secret, they formed a community, built a synagogue, and hired a prominent leader – Josiau Hisquiam Pardo – from Salonika to be their leader. Jews flocked to Jamaica from throughout the Old and New Worlds, arriving from France and Britain, as well as Spanish and Portuguese colonies. The 18th Century historian Bryan Edwards noted that: “The Jews enjoyed almost every privilege possessed by the Christian whites” – an unusual situation in many countries at the time.

Antonio Vaez Henriques was one of Lisbon’s most prominent merchants – and a secret Jew. In 1605 he was publicly tortured – along with over 150 other Jews – for the “crime” of practicing Judaism. After escaping Amsterdam, Henriques underwent circumcision, changed his name to Abraham Henriques Cohen – and publicly embraced his Judaism.

Henriques is remembered today as a dashing pirate, though accounts of his derring-do vary. It seems he became a soldier and spy for the Dutch navy and operated with their backing. What is clear is that Henriques teamed up with Sir Henry Morgan, one of the most feared pirates in the Caribbean.

Together, and with the tacit backing of the English government, Henriques and Morgan plundered Spain’s colonies in the New World. Their 1628 heist against the Spanish Armada – in which they captured fabulous amounts of silver and gold – was the largest theft in the Spanish fleet’s history.

After a long career in piracy, Morgan was made lieutenant governor of Jamaica and pardoned Abraham Henriques Cohen, who settled in Jamaica.

By 1849, eight of the 47 members of Jamaica’s House of Assembly were Jewish and the Assembly closed on Yom Kippur because so many delegates were away. By 1866, there were 13 Jewish delegates, nearly 25% of the Assembly.

Like a handful of other Caribbean congregations, Jamaica’s last surviving synagogue – Shaare Shalom in Kingston – boasts a white sand floor. This unusual tradition is said to date to the 16th Century when secret Jews sought to muffle their footsteps in synagogues by putting a thick layer of sand on the floor. 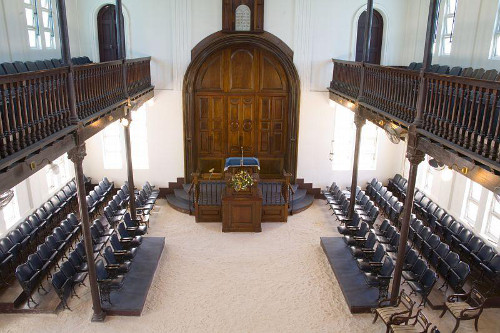 Though Shaare Shalom dates only to 1912, it’s built in the traditional Spanish-Portuguese style. It is one of only five functioning synagogues in the world today with sand floors. (The others are in Amsterdam, Curacao, Suriname, and St. Thomas.)

Some of Jamaica’s most prized artistic treasures are the product of that nation’s Jews.

Jewish writer Daniel Israel Lopez Laguna was born in France in the 1650s, and studied in Spain where he was arrested and tortured by the Inquisition. In prison, he comforted himself by thinking of the Hebrew Psalms – and decided to translate these timeless prayers into Spanish should he ever be released. Laguna eventually was let out of prison and he fled to Jamaica, where he embraced his Jewish identity. His work Espejo fiel de Vidas que contiene los Palmos de David in Verso was published in 1720 and became a literary sensation. 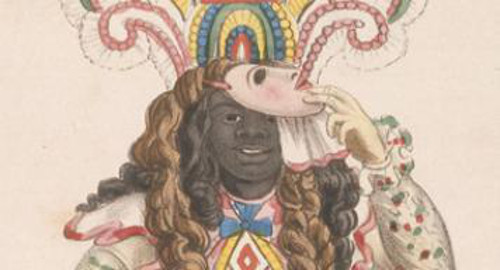 Isaac Mendes Belisario, one of Jamaica’s most prominent artists, captured the life and customs of Jamaica’s slave population. (One of his works can be seen here: 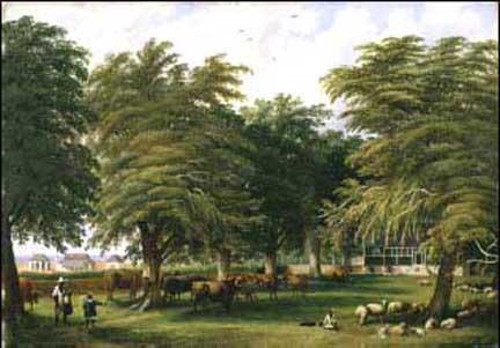 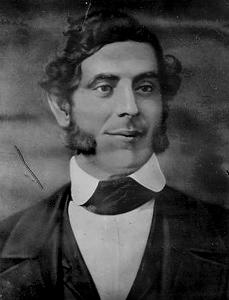 Two books written by a Jew from Jamaica helped put the modern state of Texas on the map. “The Texas Immigrant and Traveler’s Guide Book” (1856), and “Texas, Her Resources and Her Public Men,” (1858), were written by two brothers – Jacob and Joshua de Cordova – from Kingston, Jamaica. Early enthusiasts of the Lone Star State, the de Cordova brothers founded the town of Waco in 1848, and established the newspaper The Texas Herald.

Cookery writer Marilyn Delevante recalls eating sweets after the fast of Yom Kippur in Jamaica. They were called “dosees”, which probably comes from the Portuguese doce, meaning sweet.

Beat eggs and sugar until thick. Add peanuts and spices and mix. Then add matzo meal and mix until dough is bound together.

Use a spoon to drop blobs of dough on a baking sheet and bake at 300 degrees F for 5 minutes.

Take tray out of oven and, using the handle of a wooden spoon, make holes in each biscuit so that they have a doughnut shape. Then return tray to oven and continue baking at 300 degrees F until cooked through, about 10-15 minutes.

Though Jamaica’s Jewish population has today dwindled to fewer than 300 residents, in recent years there’s been a kosher revival on the island – thanks to Israeli-born caterer Vered Maoz. 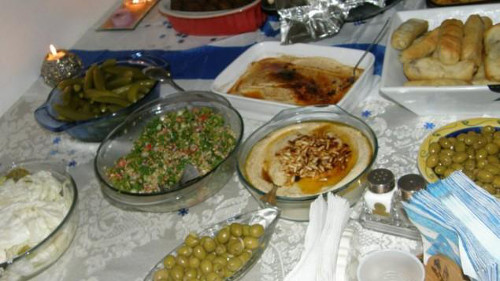 Though Maoz jokes that when her husband, a mechanical engineer, got a job in Kingston, she didn’t know where to look up Jamaica on a map, the mother of four soon fell in love with their new home. She would bake elaborate Israeli meals and Shabbat dinners – and bring gifts of food when she visited her new neighbors’ homes. Soon word spread – particularly after the Israeli ambassador to the Dominican Republic sampled her food at party for Israel’s Independence Day.

Maoz now runs her own kosher food business. There is no kosher meat in Jamaica, so all her fare is vegetarian: pita, hummus, bourekas, tahini, taboule, schug, pickles, vegetarian stuffed peppers and cabbage rolls. Orders have come in from Jewish travellers – and from Jamaicans themselves, eager to embrace a taste of Israeli-style, kosher food.

Jews of India
Jews of Ireland
Jews of Italy

When Your Husband Becomes Ill

Teaching the Unteachable
The Miami Boys Choir is Taking over TikTok
Caramelized Onion and Pumpkin Pirozhki
For Every Individual, A Torah Scroll
Comments
MOST POPULAR IN Israel
Our privacy policy
Aish.com Is Looking for Great Writers