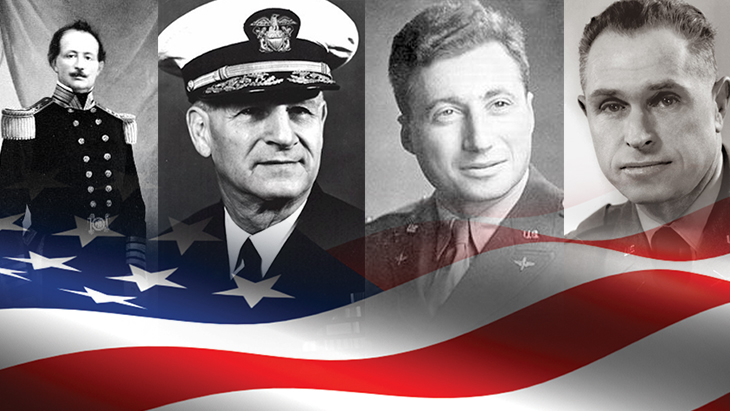 Four American Jews who made a major contribution to the American Armed Forces.

Most American Jews do not know of the major contribution their fellow Jews have made to the American Armed Forces. Many actually changed the way the U.S. military operates.

Here are four men who made a difference.

Uriah P. Levy served with distinction in the War against the Barbary Pirates and the British during the War of 1812. He was the Commodore of the U.S. Navy’s Mediterranean Squadron. Six times, Uriah Levy took superior officers to court martial for anti-Semitism. Twice he was forced out until a board reviewed the proceedings and reinstated Levy. Despite this, he became the first Jewish flag officer in the U.S. Navy. 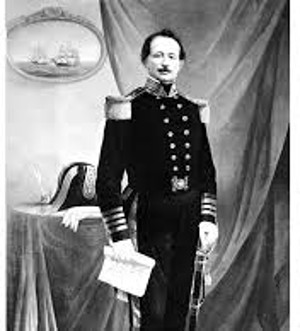 While a flag officer in 1850, Levy led the effort to eliminate flogging as a punishment for sailors convicted for crimes under the Articles of War. The U.S. Navy was the first major navy to do so.

After he retired from the navy, Levy learned Monticello - Jefferson’s home and plantation - was about to be sold to pay family debts. Levy bought it and began its restoration. He commissioned the statue of Jefferson that now sits in the Capitol Rotunda as the only privately funded statue on U.S. property. The religious center at the Naval Academy is named after Levy.

Joe Taussig’s father, Ed, was recruited into the U.S. Navy by Uriah Levy and became the first Jewish Midshipman at the Naval Academy. Ed Taussig was the first of four generations of Naval Academy graduates, all of whom had distinguished careers.

By the time the U.S. became involved in World War I, Joe Taussig competed assignments in China, Cuba and the Philippines. In May, 1917, as commander of Destroyer Squadron 8, he led the first destroyer squadron to deploy to Europe. His squadron’s accomplishments led to an assignment in D.C. as the head the Division of Enlisted Personnel, the organization responsible for recruiting, training and retaining enlisted men. 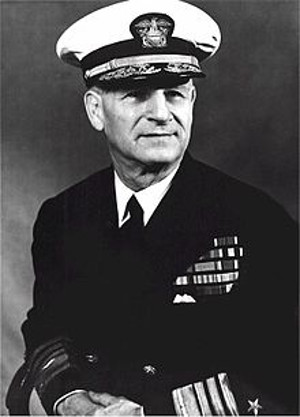 After the war, Captain Taussig testified before Senate Committee for Navy Affairs that when World War I broke out, the Navy was far from ready for war. His comments and his award-winning essay that challenged then Assistant Secretary of the Navy, Franklin Delano Roosevelt’s proposal that the Navy make up its manning shortfalls by enlisting men being paroled from jail, earned him Roosevelt’s ire.

In the U.S., officers “serve at the pleasure of the President.” As a practice that holds to this day, rarely do Navy or Marine Corps officers speak out publicly against our political leaders. When one does, one puts one’s career at risk.

Admiral William Sims, the Navy’s highest-ranking officer and a critic of Navy preparedness publicly supported Taussig. Sims sent Taussig to the Naval War College first as a student, then as a tactics instructor and eventually he became the head of the Strategy Department.

When Roosevelt took office in 1933, he informed the Navy that he would not approve RADM Taussig’s promotion to Vice Admiral. The dispute went public when two influential columnists – Drew Pearson and Robert Allen – criticized Roosevelt’s decision not to promote Taussig who was the Assistant Chief of Naval Operations. Instead, the Navy gave him command of cruiser and battleship divisions before sending him to run the Norfolk Navy Yard and the Fifth Naval District.

In May, 1940 Taussig was again asked to testify before the Senate’s Committee on Naval Affairs. He said the Navy was not prepared a war with Japan that he believed was inevitable. Allen and Pearson called Taussig the “best strategist in the Navy.”

Roosevelt was furious and as commander-in-chief, he demanded Taussig retire immediately. After Pearl Harbor and early Japanese victories followed the plan Taussig outlined, he was recalled, promoted to Vice Admiral and served on the Secretary of the Navy’s staff.

Today, VADM Joseph Taussig’s legacy lives on. As head of the Division of Enlisted Personnel, he set standards individuals must meet and focused the navy’s efforts to recruit the best and the brightest men and women. He established the Naval War College as think tank for naval strategy and war-gaming that honed the skills of the officers who led the navy to victory during World War II.

When Japanese bombed Pearl Harbor, Robert Rosenthal had just finished Brooklyn Law School. On December 8th, he enlisted in the Army and after receiving his wings was assigned to fly B-17. He arrived in England in August 1943 as a B-17 aircraft commander in the 418th Bombardment Squadron, 100th Bombardment Group.

The group was known as “Bloody Hundredth” because of its high loss rates even though they were not much worse than any other B-17 unit. Before the P-38 and P-51s began escorting the bombers all the way to the targets and back, the Eighth Air Force was losing more than ten percent of the bombers on every mission. With the fighter escorts, the loss rate dropped to a more “acceptable” seven percent. 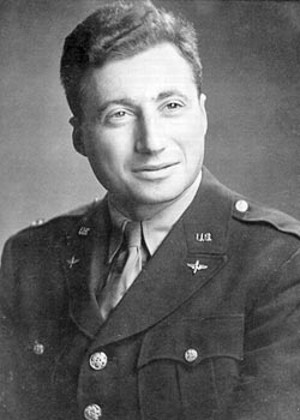 On October 10th 1943, Rosenthal’s crew in a B-17 named Rosie’s Riveters took off on its third mission. The Eighth Air Force expected the bombers to get to their target in Muenster, Germany unescorted. His B-17 was the only one of 13 bombers from his group that returned. When he landed, two of his airplane’s four engines were shut down due to battle damage and it had a large hole in the left wing due to a direct hit by an 88mm shell.

Rosenthal flew his required 25 missions and volunteered to fly a second tour. The first time he was shot down in September 1944, he broke his arm bailing out over German occupied France. The Free French managed to get him back to England and Rosenthal resumed his career as a B-17 pilot.

On his 52nd and next to last mission, Rosenthal flew the lead bomber headed to Berlin. An 88mm anti-aircraft shell set the B-17 on fire. Nevertheless, Rosenthal led his formation over the target before he descended. He was the last to bail out at 1,000 feet just before the B-17 exploded. Rosenthal and his crew landed behind Soviet lines and were flown back to England. Rosenthal flew one more mission before the war ended.

Rosenthal was selected to interview Herman Goering and prepare the case against the head of the Luftwaffe. Goering was convicted of war crimes and the night before he was to be hung, a cyanide pill was smuggled into his cell and Goering committed suicide.

In 1948, Robert Rosenthal returned to the law firm that hired him right out of law school. He was elected to the Jewish-American Hall of Fame in 2006 and passed away at the age of 90 in 2007.

Colonel Aaron Bank – The Founder of the Green Berets

As a young man, Aaron Bank traveled extensively through Europe and became fluent in German and French. At the outbreak of World War II, he was 37 and volunteered. He went through Officer Candidate School and was commissioned as a second lieutenant. Because of his language proficiency, Bank was assigned to the Office of Strategic Services (O.S.S.).

After training on how to conduct clandestine operations, he parachuted into France on July 31st,1944 as the leader of a three-man Jedburg team code-named Packard knowing that if he was captured, the Gestapo would torture and kill him. Aided by French partisans, Bank’s team harassed the Germans until he was pulled out in late 1944. 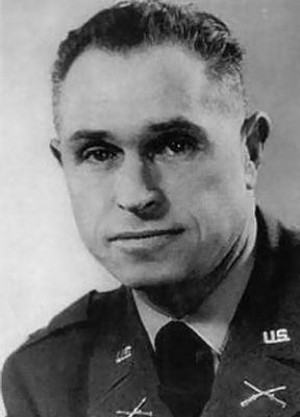 Bank’s next assignment was to recruit and lead a team of anti-Nazis and former German soldiers who would kill Adolph Hitler if and when he fled to his redoubt in Berchtesgaden. O.S.S. head, William Donovan reportedly told one of his subordinates to “Tell Bank to get Hitler.” The mission was called Iron Cross and was cancelled just after the team boarded its airplane to fly into Bavaria.

Right after the war ended in Europe, Bank was sent to French Indochina to rescue French and other Europeans held prisoner by the Japanese. While there, Bank worked with Ho Chi Minh who was fighting the Japanese. After the war, Bank served in intelligence billets in Europe before being sent to Korea as the executive officer of the 187th Regimental Combat Team that fought in several battles.

Back in the U.S., Bank was assigned as the Chief of Special Operations Branch of the Army’s Office of Psychological Warfare and ordered to “staff and gain approval for an O.S.S. Jedburg style force.” In 1952, the Army approved and funded 2,300-man unit. Its mission was “to infiltrate by land, sea or air deep into enemy occupied territory and organize the resistance guerrilla potential to conduct Special Forces operations with the emphasis on guerrilla training.”

Bank and seven others started the 10th Special Forces Group (Airborne) on June 19th, 1952 in Fort Bragg, NC. Within two years, the 10th was manned, operational and split into two units, the 10th and the 77th. After the Berlin uprising in 1953, both were expanded. The structure, training, tactics and employment of Green Beret A Teams that Bank outlined in 1952 are still used today. Colonel Bank retired in 1958.

After Bank left the Army, President Kennedy authorized the wearing of the “beret, man's, wool, rifle green, Army shade 297.” Since then, the Army Special Forces have been known as the Green Berets. 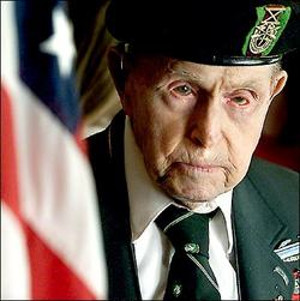 Bank wrote two books. One was the story of his career - From O.S.S. to Green Berets. The other was a novel called Iron Cross that Ethan Nathanson, author of the The Dirty Dozen, helped him write.

Horrified at the lack of security at the San Onofre nuclear plant in Southern California near where he lived, Bank lobbied for changes. Twice he had to publicly expose the vulnerability of the plant to sabotage. Finally, in 1974, the Nuclear Regulatory Commission acted on his recommendations for all nuclear power plants in the U.S.

There are many others such as ADM Ben Morrell who is considered the father of the Navy’s SeaBees and General Sydney Sachnow, a Holocaust survivor who is one of the most revered and highly decorated Green Berets ever who had distinguished careers. Their accomplishments along with many others are buried in U.S. military history. They are Jewish role models whose story is worth telling to our children.

If you are interested in more about this topic or are part of a group that would like to see the presentation on these and many more American Jews, the author welcomes the opportunity. You can contact him either through Aish.com or via his website https://marcliebman.com.

Marc is a Naval Aviator and helicopter pilot who flew combat missions during the Vietnam War and Desert Shield/Storm. He is also an award-winning author of six novels, the hero of which is a nice Jewish boy who happens to be a Naval Aviator.

Rabbi Manischewitz and His Iconic Company