During the Civil War, General Ulysses Grant expelled American Jews from their homes during Hanukkah.

In the depths of America’s Civil War, the run-up to Hanukkah was tense for the United States’ tiny Jewish community.

Amounting to only half of one percent of the nation’s population, many American Jews at that time were recent immigrants who arrived penniless from Central Europe. Shop-keeping and trading were popular jobs for these new American Jews. Though their community was tiny, as Civil War raged Jews were routinely accused of being traitors and war profiteers, and were demonized in the press and official correspondence.

Antipathy to Jews spanned both sides in the Civil War. In the South, Jews were often regarded as outsiders. In the North, the presence of several high-ranking Jews in the Confederate Army gave fuel to the pernicious falsehood that Jews were somehow behind the South’s decision to secede from the Union and had caused the war. Historian James M. McPherson notes that during the Civil War, “harassed Union officers had come to use the word ‘Jew’ the same way many southerners used ‘Yankee’ – as a shorthand way of describing anyone they considered shrewd, acquisitive, aggressive, and possibly dishonest.” (from Battle Cry of Freedom: The Civil War Era. Oxford University Press: 1988)

Many of these lies about Jews generally centered on the slander that Jews were war profiteers. When the Civil War began, the price of Southern-grown cotton skyrocketed from 10 cents a pound in December 1860 to 68 cents a pound two years later. Even in the midst of war, the North and South continued to depend on each other economically. Northern textile mills relied on Southern cotton; even the Union Army used Southern-grown cotton for its uniforms and tents. To facilitate trade, President Lincoln authorized the distribution of carefully regulated, licensed trading permits allowing cotton to be exported to the North.

Permits were overseen by senior Union Army officials. One of those in charge of distributing them was General Ulysses S. Grant, who governed the District of Tennessee, including areas of nearby Mississippi and Kentucky. Unlike Lincoln, Grant despised issuing trading permits, wondering aloud to aides how the Union Army was supposed to win a war against the Confederacy if they continued to trade with them. In addition to those who legally traded cotton, a robust black-market cotton trade sprang up; many people wrongly assumed that black marketeers were Jews, smearing Jews as profiteers and motivated purely by greed.

Historian Jonathan Sarna describes the simmering tension: “In short order, public corruption rose, mutual trust declined, and recriminations abounded. As is so often the case in such circumstances, suspicion fell particularly upon the Jews, long stereotyped in Christian culture as being financially unscrupulous. Jews became the focus for much of the hatred and mistrust that the war unleashed...” (from When General Grant Expelled the Jews. Nextbook: 2012)

Gen. Grant seemed to be obsessed with Jews, falsely viewing them as somehow being behind the entire black-market cotton trade. Historian Ron Chernow notes that Grant’s imagination was increasingly “endowing (Jews) with almost diabolical powers” and that Gen. Grant ranted about Jews’ supposedly all-reaching influence, writing that Jews “come in with their Carpet sacks in spite of all that can be done to prevent it. The Jews seem to be a privileged class that can travel anywhere…” and spread throughout the country (Quoted in Grant. Penguin Press: 2017). Of over two hundred merchants who were given permits to export cotton to the North, only four were Jewish. Yet this small number didn’t prevent Gen. Grant and others from wrongly seeing Jews as uniquely successful in trade and hating them for it. 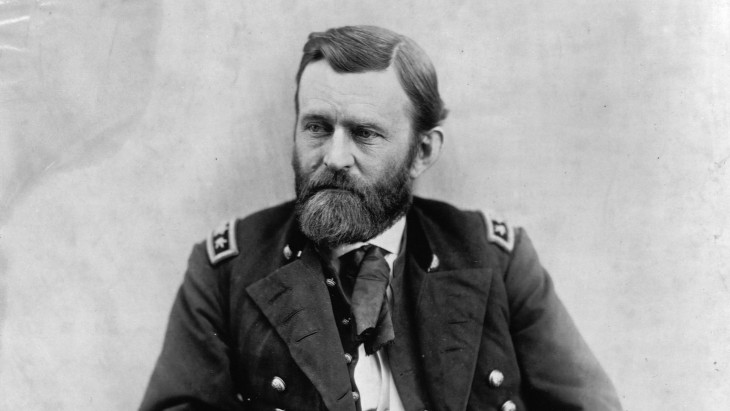 In early December 1862, just weeks before the Jewish festival of Hanukkah, Gen. Grant’s anti-Jewish loathing boiled over. His own father, Jesse Grant, applied for permission to import cotton to the North. Gen. Grant had a strained relationship with his father and now his father was asking to use his son’s influence to prosper in the cotton trade Gen. Grant so despised. Even worse, Jesse Grant was working in partnership with a Jewish family of clothing manufacturers in Cincinnati, Ohio. It was too much for the General; he decided to take a radical step.

General Order No. 11, issued on the first day of Hanukkah, December 17 1862, was brief and chilling:

“The Jews, as a class violating every regulation of trade established by the Treasury Department and also department orders, are hereby expelled from the department within twenty-four hours from the receipt of this order. Post commanders will see that all of this class of people be furnished passes and required to leave, and any one returning after such notification will be arrested and held in confinement until and opportunity occurs of sending them out as prisoners…”

Every Jew in Gen. Grant’s sizeable district was to be expelled within a day. Those returning faced arrest. Instead of targeting Jewish businessmen (which would have been unfair in any case) all Jews – women, children, those not working in trade – were included.

Luckily for many of the Jews in this large area, fighting disrupted telegraph lines and it was hard to get out word of the new law. Nevertheless, Gen. Grant’s order did make it to some districts. Shockingly, locals seemed more than happy to comply and turn on the Jews in their midst.

A Jew identified only as Mr. Silverman, originally from Chicago, was travelling to Holly Springs, Mississippi over Hanukkah, when he heard the order he could no longer remain in the territory. Local reports noted that Mr. Silverman made his way to a telegraph office to contact Gen. Grant and clarify this bizarre request. He was arrested for this so-called “crime”.

In the eastern part of Gen. Grant’s territory, a young Jewish newlywed couple was detained while they travelled through. According to the New York based newspaper Jewish Record, the couple was arrested, had their money and personal possessions robbed, their horse and buggy confiscated, and their luggage burned. It seems there was a scuffle or fight, because the couple became drenched. Despite the winter weather, they were brought to jail, forbidden from changing out of wet clothes, and verbally abused. When they appealed to Brigadier General James Tuttle, commander of the Union garrison in Cairo Illinois, he declined to help, declaring, “You are Jews, and...neither a benefit to the Union or Confederacy.”

Anti-Jewish violence broke out in a number of towns across the region, reaching a crescendo in the town of Paducah, Kentucky.

Jews first moved to Paducah in the 1840s; by that infamous Hanukkah of 1862 the small community had put down roots. The Encyclopedia of Southern Jewish Communities notes that by 1859, eleven Paducah businesses had Jewish owners; half a dozen Jewish-owned clothing stores dotted the town. In 1859, twenty local Jews founded the Chevra Yeshurun Jewish burial society and purchased land for a Jewish cemetery.

When news of General Order No. 11 came, local authorities quickly turned on the Jews in their midst. The B’nai B’rith Missouri Lodge described what happened next: all Jews were given the order “to leave the city of Paducah, Kentucky within twenty-four hours after receiving this order”. Women and children were forced out, too, and in one case a baby was nearly lost in the confusion. Two elderly Jewish women were too ill to leave their homes; kind-hearted local neighbors volunteered to care for them while their relatives were forced to leave. 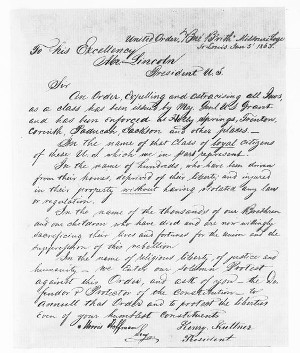 The petition to Pres. Lincoln from the B’nai B’rith Missouri Lodge

Forced out of their homes, Paducah’s Jews appealed to President Lincoln. Cesar Kaskel, a Jewish immigrant from Prussia who’d moved to Paducah years before, travelled to Washington DC to speak with the president himself. At each stop along the way, he appealed to local journalists “to lend the powerful aid of the press to the suffering cause of outraged humanity (and) to blot out as quick as possible this stain on our national honor” (quoted in Lincoln and the Jews: A History by Jonathan D. Sarna and Benjamin Shapell. St. Martin’s Press: 2015).

When he finally arrived in Washington DC, Cesar Kaskel met Cincinnati’s Congressman, John Addison Gurley, and enlisted his help. Together, the two men went to speak with Pres. Lincoln, who told them he’d had no idea of Gen. Grant’s order expelling the Jews. Lincoln was Biblically literate and spoke to Cesar Kaskel using the metaphor of the ancient Jews being driven from the Land of Israel, asking him: “And so the children of Israel were driven from the happy land of Canaan?” Kaskel replied in a similar tone: “Yes, and that is why we have come unto Father Abraham’s bosom, asking protection.”

Lincoln replied, “And this protection they shall have”.

Historians debate whether or not this conversation really took place using this exalted tone, but Pres. Lincoln did immediately instruct Henry Halleck, the General in Chief of the Union Army, to revoke the decree, which he did on January 6, 1863.

Most of Paducah’s Jews returned, but the pernicious effects of General Order No. 11 lingered for years. The singling out of American Jews “as a class” for special treatment make many feel unwelcome and raised fears that the violence so many had fled in Europe had followed them to their new homes in the United States. Though Ulysses Grant came to regret his order expelling the Jews, the infamous order, coming during the Jewish festival of Hanukkah, remained a reminder that even in America, Jews could never feel truly at home.

Each year, Jews around the world sing the song Maoz Tzur after lighting the Hanukkah candles. The words in its final verse – “there is no end to days of evil” – never seemed more true to American Jews than in the winter of 1862, when Jews “as a class” – men, women and children – were denied security and torn from their homes.

The Influence of the Hebrew Bible on America's Founding Fathers

The Tulsa Race Massacre and Oklahoma’s Jews
The Promise Of The Land
Which Chat Are You On?: Parshas Behar/Lag Ba’Omer
Do You Like Slow-Cooked Food? Thank the Jews
Comments
MOST POPULAR IN Society
Our privacy policy