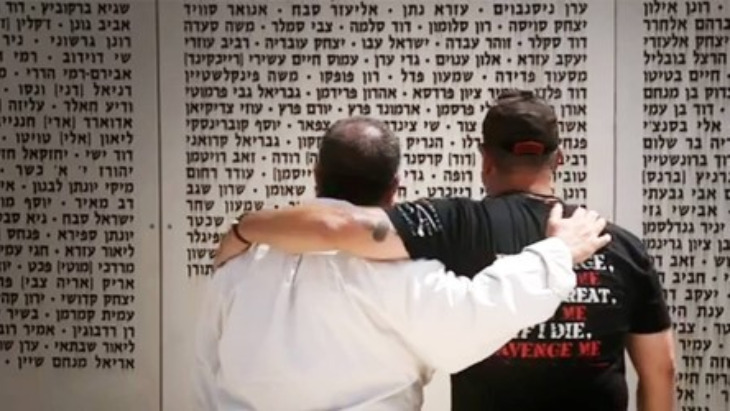 Through Heroes to Heroes soldiers open up about their experience and move onto a path of spiritual healing.

When Donna Perdue retired in 2007 from the U.S. Marines after 22 years, she found it hard to return to civilian life and even harder to just let things slide. Plus, the faith that she’d once relied on for comfort was gone.

Suffering from PTS, post-traumatic stress, Perdue says, “I was having nightmares constantly and had horrible flashbacks. Because I didn’t get enough sleep, I was neglecting things and they would fall through the hoops. It would stress my relationship with my husband. It took a huge toll.”

She tried medicine and therapy, but they were of limited help. It wasn’t until she traveled to Israel as part of a program offered by an organization called Heroes to Heroes that she began a journey to healing. “I saw an ad for ‘Heroes to Heroes,’ and thought, ‘Why not? It’s a different approach,’” recalls Perdue, who grew up going to church regularly and was intrigued to see the sites of different faiths. 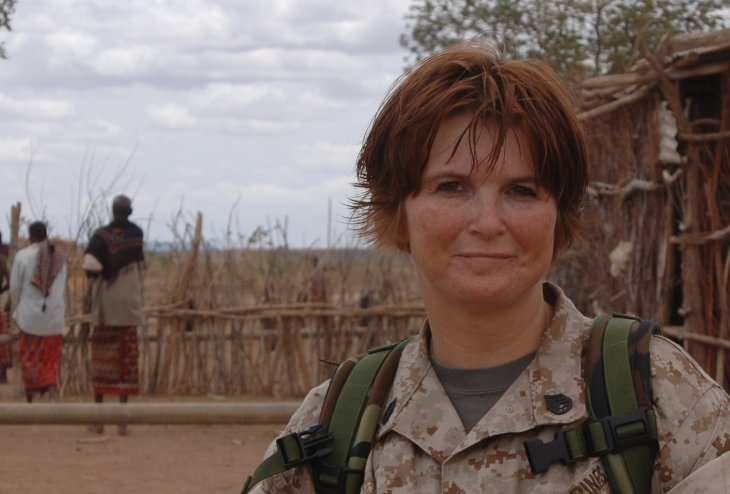 Heroes to Heroes brings to Israel American veterans who are suffering emotionally after their military service to meet with their counterparts, former members of the Israel Defense Forces, and to help them rediscover a connection to their faith as a path to healing. It is the brainchild of Judy Isaacson Elias, a religiously observant Jewish mother and grandmother, who had her own struggle with faith as a teen.

“When I was 16, I was in a bad spot. I had lost my faith in my family, in Judaism, in everything.” Unsure of what to do, her parents sent her on an organized youth trip to Israel and everything changed. “When I put my hands on the Western Wall, the Kotel, I realized I wasn’t alone and that I better get my act together. I came home and started bringing God into my life.” 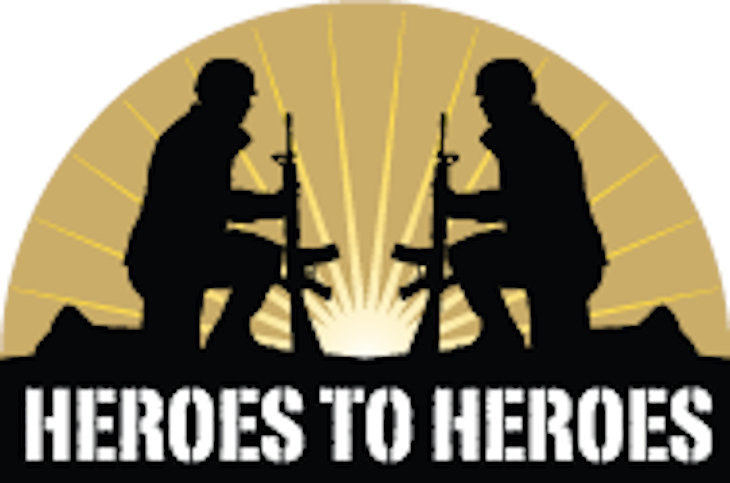 Years later – and several years after the death of her father, a World War II veteran who Elias believes had a rough time because of his own war experiences – Elias was invited to visit soldiers who had returned from Iraq and Afghanistan at the Walter Reed Medical Center. “What I saw shocked me. These soldiers were afraid to be home. They wanted to go back to wherever they had been. That’s when I learned that the suicide rate was 22 veterans a day, and I asked myself, 'What can I do?'”

If I took them to Israel, would they choose life and reconnect to spirituality and move forward?

Knowing the role faith played in helping her overcome her challenges, she began to wonder if it could do the same for others. “I thought, what if I took them to Israel and they got to experience their faith. Would they then choose life and reconnect to spirituality and move forward?”

“We were given this amazing Land of Israel and we can bring people who are hurting and show them that this connection God is for everyone,” she says. “Using this healing power that God gave to us is one way we can be a light onto the nations." 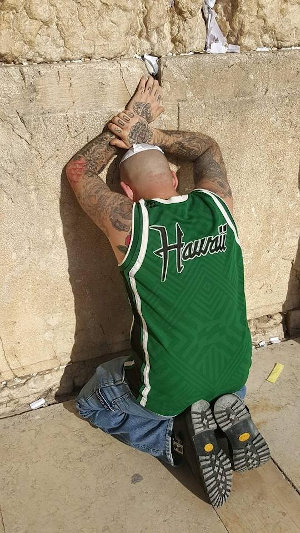 An American veteran at the Western Wall

The first group of veterans went to Israel in September 2011 and since then 300 Americans and 100 Israelis have participated in the program. According to Elias, there is a waiting list of about 600 people.

“When I went to the Kotel at 16 I thought, ‘I don’t deserve to be here, I was a bad Jew,’” Elias recalls. “I see that many of the vets feel the same way. They will say to me or to their Heroes to Heroes coach ‘I don’t deserve to go to Israel’ because of what they did during wartime. That’s the person I want to take.”

For Zvika Comay, a former IDF officer, helping the American veterans who come on Heroes to Heroes gives him a way to help himself.

Once in Israel, she says, the veterans focus shifts from feelings of unworthiness to the mindset of “I am here so God must want me to live despite what I did in war. We explain to them that God is giving you the gift of walking in His holy land to help you start over. By accepting this gift from God, you can rebuild, find your faith, and begin a new relationship with Him, allowing you to accept forgiveness. Then you can help others and build your family with a connection to God.”

For Zvika Comay, a former IDF officer, helping the American veterans who come on Heroes to Heroes gives him a way to help himself.

“PTSD is the main issue, and I realized that by telling my story in English and not in Hebrew, I feel differently and I can manage to tell my story and bring myself to a different state of mind,” says Zvika. “When I met one of the men during the first event, it was a very special connection. When he’s awake because he can’t sleep, he can talk to me because of the time difference. We have conversations all day.”

He also leads the American veterans on tours of Yad La’Shiryon in Latrun, a tank museum which includes a memorial wall for fallen members of the IDF’s armored division. Doing so, he admits is a tough thing to do so, because of all the reminders of those that have been lost, but that’s something the American veterans understand well. "To me, we are brother to brother.” 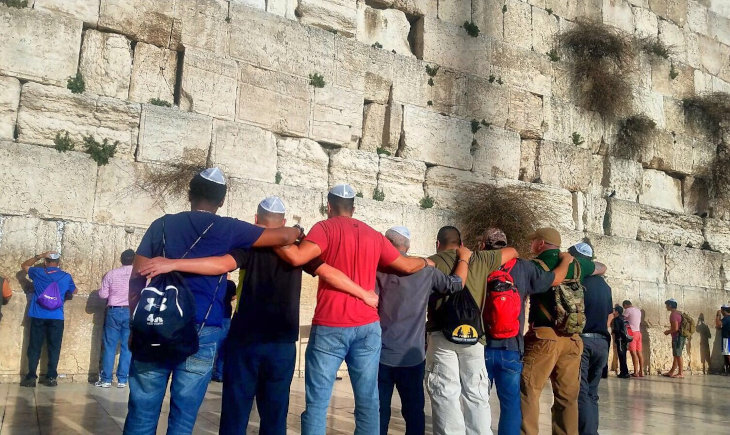 The group at the Kotel

“I will never tell anyone what they should do, but I can tell them my experience and then they will do what they want understanding their own situation. To just stay with PTSD is the worst situation, if you don’t do anything you will be injured for the rest of your life and you won’t recover. … I am still in my recovery, because I am still alive. I do hope one day I can look back and say it was a good life.”

As for Perdue, who now serves as a Heroes to Heroes coach helping other female veterans on their road to recovery, that first trip changed the trajectory of her life. Walking around sites connected to her faith, Perdue found the lessons and verses she’d learned years earlier “started coming back to me, and all those warm feelings I had as a young person started come back as well. It was fleeting, but it was there.” 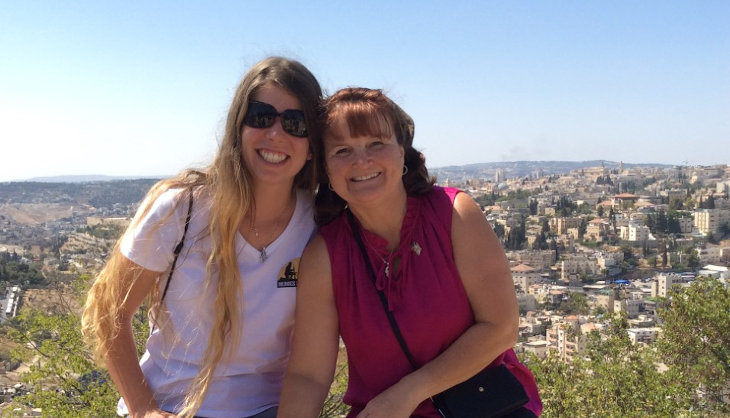 Donna with Omer, an Israeli soldier

She also found solace in the nightly group sessions with American and Israeli female veterans. “It was really cool. Together we helped one another with the words and emotions. Otherwise, I don’t think I could have done this just by going to a church here and see myself being religious again. I don’t think that would have happened.”

“It means so much for me to have my faith back… I still have some flashbacks and nightmares, but when I do, I can walk around my house, pray and be comforted and go back to sleep.” Even her family has noticed the changes in Perdue, saying she’s kinder and more introspective than before. “I’m still a Marine, but I don’t bark as loudly.”

I, Pencil: The Movie
The Promise Of The Land
Which Chat Are You On?: Parshas Behar/Lag Ba’Omer
Do You Like Slow-Cooked Food? Thank the Jews
Comments
MOST POPULAR IN Society
Our privacy policy