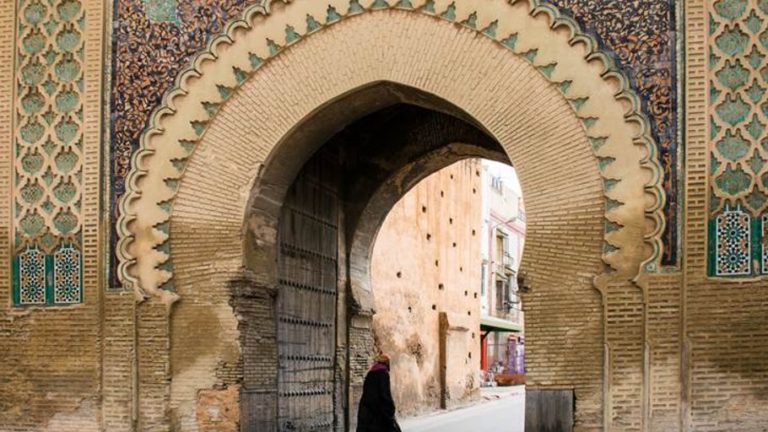 Morocco’s modern-day monarchy has incredible admiration for its historic Jewish community which dates back to the first century.

I recently visited the modern-day kingdom of Morocco. Our group included successful individuals from the world of finance and business, active leaders on the American political scene advocating for strong US-Israel relationships and philanthropists for a host of Jewish and Israeli institutions.

We stayed in palatial hotels, feasted on gourmet Moroccan kosher cuisine, enjoyed a Shabbat with the community of Marrakesh and met with the highest echelon of leaders of the contemporary Jewish community. 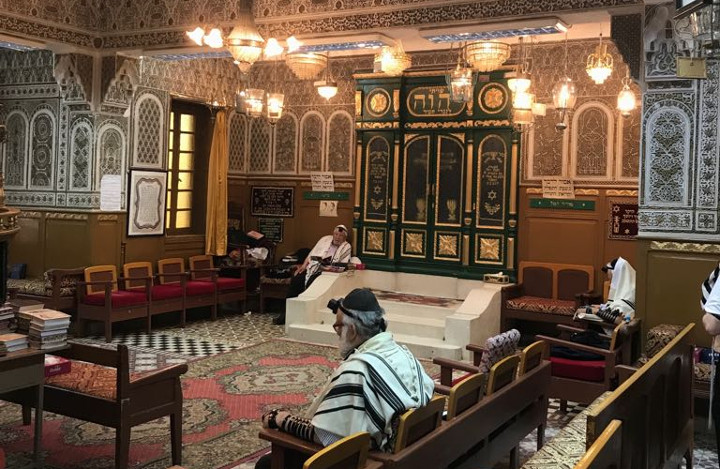 The Ben Dantin Synagogue in Fes

Throngs of Jewish tourists from around the globe have made Morocco a primary vacation destination. This phenomenon only began roughly 10 years ago, parked by the enormous initiative of King Mohammed VI to restore Morocco’s ancient mellahs (Jewish quarters), its historic synagogues and burial sites.

We were amazed to discover the incredible admiration of Morocco’s modern-day monarchy for its historic Jewish community, which dates back to the first century. We discovered how remarkably invested the current monarch is in restoring and revitalizing all of the remnants of Morocco’s Jewish past and present. In particular, there is an emphasis on reopening the sites where Morocco’s multitudinous rabbinic sages and saints are buried, as places of prayer and tribute. 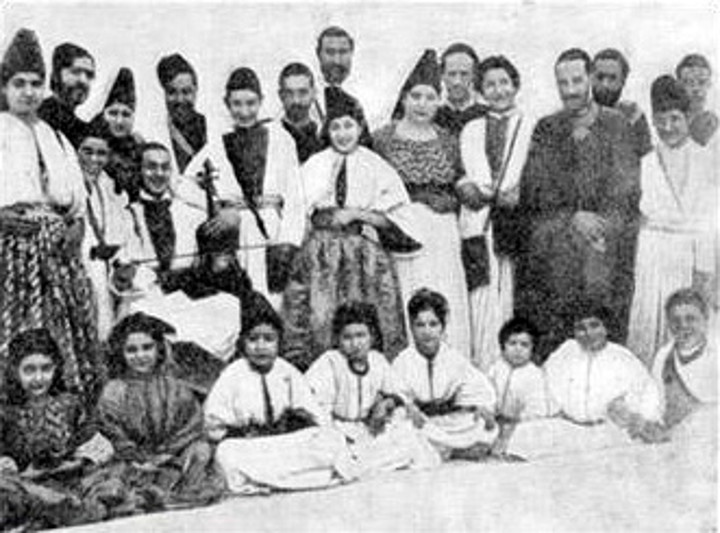 From the moment we touched down in Mohammed V Airport, we became aware of the benevolent attitude the current Alawite dynasty has had in venerating and protecting its Jews, past and present. It was Mohammed V, the grandfather of the current king, who courageously protected his community of 300,000 Jewish subjects from deportation and death in Europe’s crematoria. 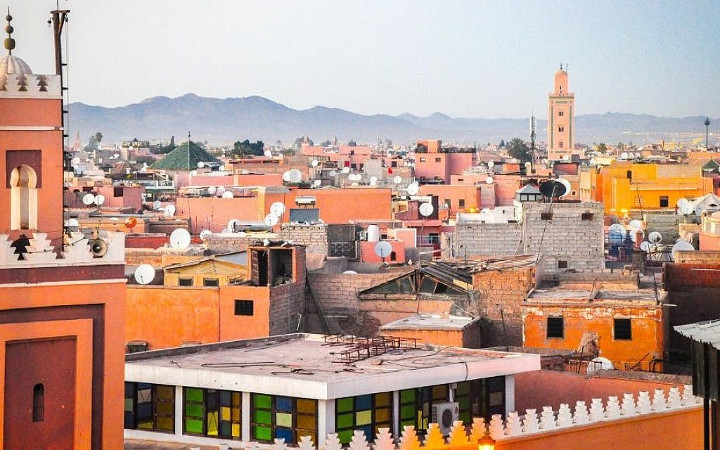 A view of the Old City of Marrakech

In 1941, the Nazis and their Vichy French subordinates took control of Morocco, which had been a French protectorate in 1912. They sought to impose their plans for the Final Solution onto this largest community of the Sefardic diaspora. As our ebullient and erudite Jewish tour guide, Rafi Elmaliach (author of Jews Under the Muslim Sky) recounted how the Nazis came prepared with 100,000 yellow Jewish stars and demanded that the king provide them with a list of his Jewish subjects. King Mohammed V refused, saying, “There are no Jews in Morocco, there are only Moroccans, and all of them are my subjects. And if you have prepared these Jewish stars, please prepare another 50 for me and all the members of my royal family. And wherever you presume to take them, take us as well.” 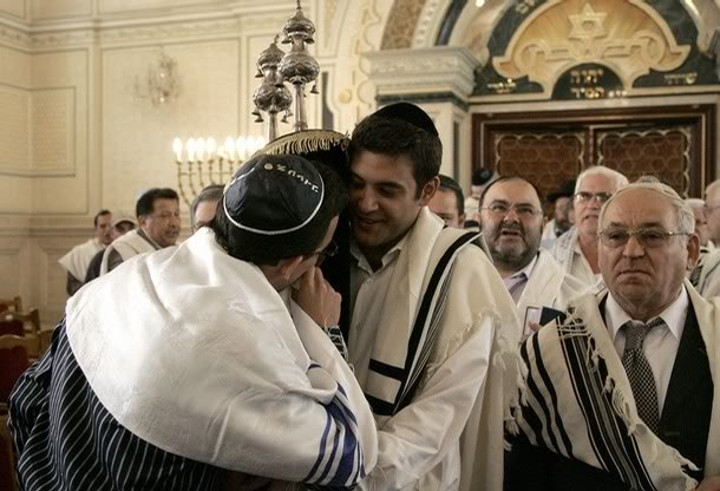 The king audaciously invited to his birthday party, along with the ranking members of the Vichy French and Nazi rulership, the esteemed rabbis and eminent Jewish leaders with whom he had deep relationships and sought counsel on a regular basis. The Nazis were so infuriated by this scene that they stormed out and abandoned their plans of extermination. It is quite likely that by these actions Mohammed V singlehandedly saved more Jews from the Nazi Holocaust than any other individual, Jewish or gentile, in the world.

When the State of Israel was founded in 1948 and anti-Jewish riots broke out in his kingdom, he quelled them quickly and declared that “Morocco has always protected its Jews from harm.” 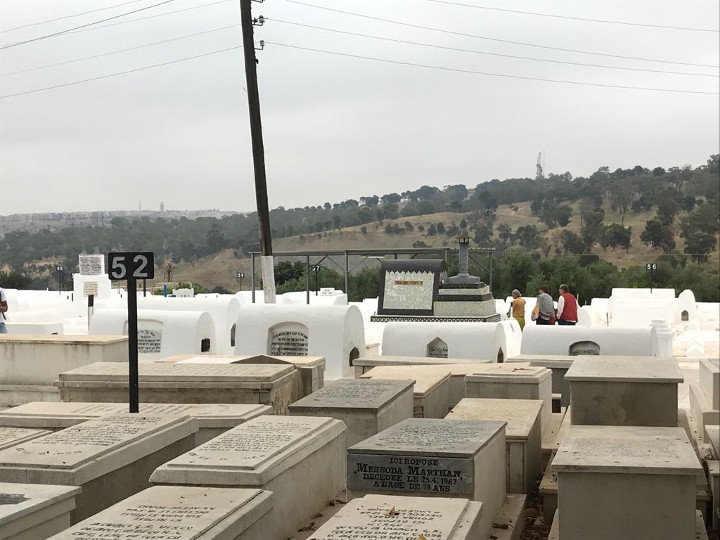 The gravesite of Rabi Yehuda Ben Attar “The Lion of Fes”

With the open invitation to move to their homeland, beginning in 1948, and subsequently the Six Day War, Morocco’s vast Jewish population quickly emptied out. By the late 70’s only a skeletal group of communities remained. The famed Talmud Torahs of Marrakesh, Fez, Meknes and the Tafilalet region, home to the illustrious rabbinic Abuchatzeira dynasty, fell silent.

Each of the villages along the magnificent Atlas Mountain range once hosted a small Jewish quarter and synagogue. Only recently have dozens of these synagogues been opened to retrieve their treasure troves of Jewish writings and artifacts, spearheaded by the efforts of our guide, Rafi, who opened the first only Jewish museum in a Muslim country, with the blessing and financing of the king. 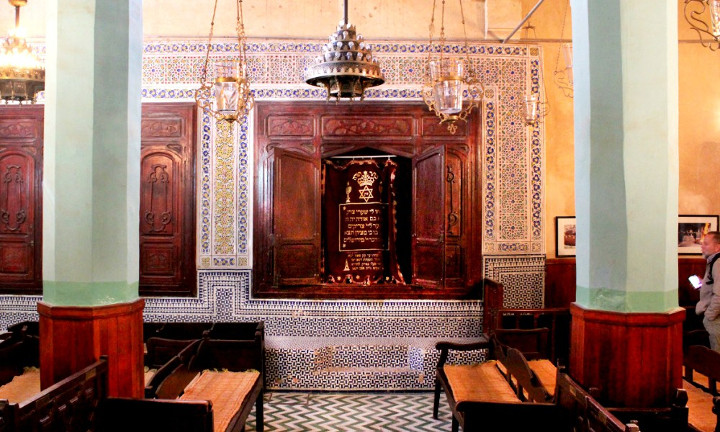 In addition to the five million dollars the current king, Mohammed VI, who took power in 1999, has personally provided to restore Jewish quarters, synagogues and holy sites throughout his country, he has demanded that the names of the streets be restored to their Jewish origins. For example, Jerusalem Street and not Al Quds Street. 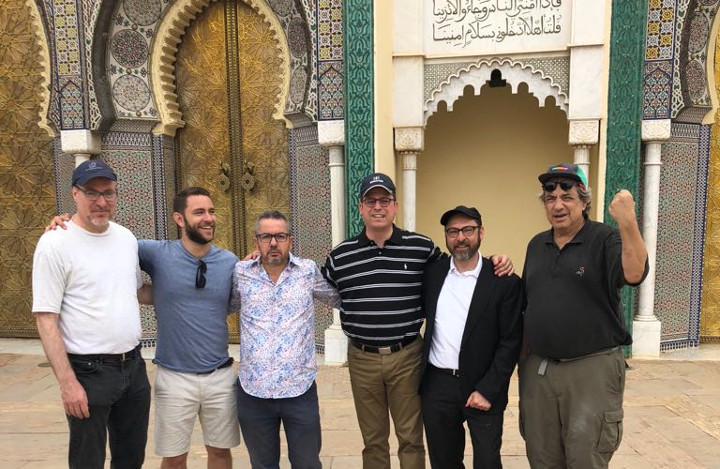 The source for the monarchy’s great love for its Jewish subjects and history is due primarily to two major factors.

The first is due to the loyalty and expert guidance that the Jews provided for the kings in all areas of business, politics, finance and government. An example of this is Andre Azoulay, who bears the title of Senior Advisor to the King, a role he has played since 1991 until today. After a long career in the Paribes Bank in Paris, and as Executive Vice President for its Middle East and African Region, he played a major royal in Morocco’s implementation of economic reforms as well as its privatization and deregulation programs, while sustaining the economic role of the private sector and encouraging international investment to sustain Morocco’s economic growth. Mr. Azoulay also played a role as an ambassador of goodwill between Jews and Muslims worldwide, serving on executive committees of major foundations and international groups that promote mutual knowledge and intercultural relationships between Muslims and Jews. 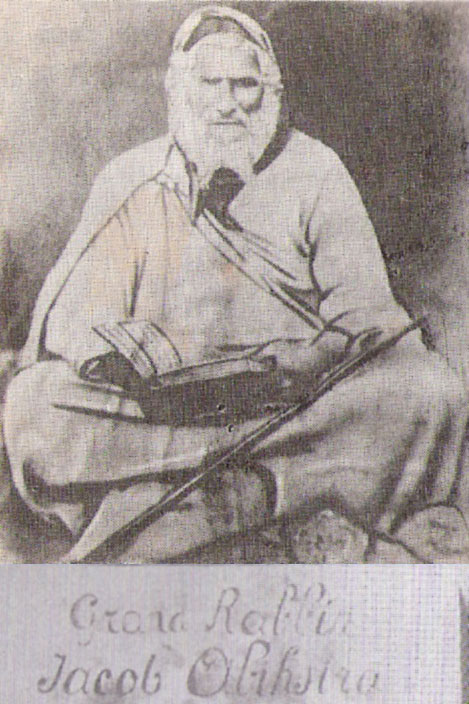 Mr. Azoulay’s lifetime contribution is being continued with the recent appointment of his daughter, Audrey Azoulay, General of UNESCO, to build respect and reconciliation between the Muslim and Jewish world.

In the first period of her leadership, UNESCO has avoided its outrageous declarations severing Jewish history from holy sites such as Hevron and Jerusalem, walking back those amendments that have been agreed to by Israel and other Jewish leaders. Because of her efforts, Israel is reconsidering its exit from Unesco, pending her ability to dramatically change its virulent anti-Israel anti-Jewish bias.

This model of the Jewish benefactor-counsellor to the king connects to their deep reverence for the hundreds of rabbis, sages and saints whose blessings and guidance led not only the Jewish community, but were sought after by Muslims throughout the vast Moroccan countryside. Renowned miracle working rabbis, such as Rabbi Yaakov Abuchatzeira (died 1880) was the address for Jew and Muslim alike, who sought blessings for fertility, healing, and prosperity.

Many miracle working rabbis, such as Rabbi David Moshe who dates back to the 12th century, were enshrined in legend by the ancient community of Berber Jews, known as toshavim, whose roots go back to the first century and preceded the megurashim, the influx of Jews who entered Morocco after their exile from Spain and Portugal in 1492. Hundreds of burial sites of these legendary souls have been restored and are now frequented by thousands of visitors, particularly on the occasion of their hilula, the anniversary of their death.

Rafi reported to us about a recent visitor to the site of Rabbi David UMoshe who was extremely dismissive of the idea of lighting a candle and praying. He said, “We don’t believe in that!” Nevertheless, Rafi urged him to do so and he offered prayers for the recovery of his wife who was plagued with an illness that afflicted her legs and for which there was no known cure. Shortly after his visit, he sent a letter and a donation to Rafi for the restoration of this site, stating that just now the doctors had identified a cure for his wife’s condition.

This is not to say that the treatment of Jewish by their Muslim rulers since the 8th century has always been benevolent. Moderate rulers were replaced by fundamentalist and violent regimes, particularly the intolerant dynasty of the Almohades who came into power in 1146. At that time many Jews were compelled to embrace Islam. Maimonides, who was staying in Fez with his father, is said to have written to the communities to comfort and encourage his brethren and fellow believers in this terrible time of oppression. Jews became objects of scorn and violent despotic abuse from which there was no escape. 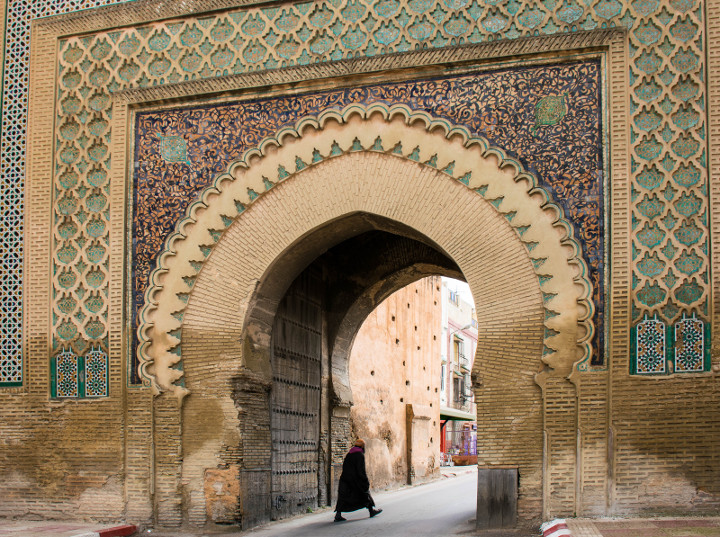 Entering the gate of the Jewish Quarter

The Jews also suffered much during the great 17th century conquests of Moulay Rashid, and his successor Moulay Mohammed who took the city of Marrakech in 1670. He tore down the synagogues of the city, expelled many Jews from the Berber region and in general treated them tyrannically. His tax demands on the Jews were enormous. This was far from an isolated experience.

Even as recently as 1920 Berber ruler Mouley Mohammed executed the renowned saint Rabbi David Abuchatzera by firing his body from a canon and threatened the whole of Tafilalet region’s Jews with extinction for fear of their collaborating with the French against his insurgency.

Still, this current unique monarchy is an inspiring model of tolerance and admiration for their Jewish citizenry and history, something I hope will be emulated.

Rabbi Jay Yaacov Schwartz is a Rabbi, Teacher and Therapist. He and his family reside in Ramat Beit Shemesh Israel.

Countering Hate in Montana
Scientific Curiosity and the Divine Encounter
Mind Over Milkshakes
Love the Convert
Comments
MOST POPULAR IN Israel
Our privacy policy
Aish.com Is Looking for Great Writers