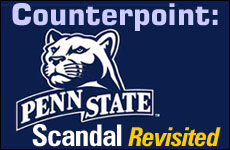 The Torah demands that we not judge the moral conduct of the people involved without knowing what they actually saw and did.

What is most distressing about the Penn State scandal is people’s reactions to it. It’s as though the allegations of child abuse render us all an incoherent mob, lighting our torches, grabbing our pitchforks, heading out at midnight to go confront the monster. My colleague Harve Linder’s article illustrates this point.

I should point out before I go any further that Harve Linder is my Talmud study partner and my colleague. I have the greatest respect for his good heart and his legal acumen. He is in all respects a gentleman and a scholar. I disagree with him on one issue in his article.

He states the rhetorical question: “When the graduate student walked into the shower room and allegedly discovered the horrific acts of the assistant coach, what should he have done?” He concludes that the graduate student’s conduct failed to meet the Torah’s standard of “do not stand idly on your brother’s blood.”

There are other Torah injunctions, however, that should give us pause. There is the warning not to prejudge as situation, as it says: “Do not render an unfair decision…” (Leviticus 19:15)

Moreover, the laws against gossip (loshon hara) are designed to prevent exactly the kind of torch-and-pitchfork rush to judgment that the Penn State case reveals. “Do not raise a false report, says the Torah” (Exodus 23:1), which our Sages explain as a warning “not to receive or listen to evil reports.”

We cannot presume to judge the actions of Mike McQueary, the graduate student who “discovered” the heinous act.

Applying these divine injunctions to the Penn State case, we cannot presume to judge the actions of Mike McQueary, the graduate student who “discovered” the heinous act. Let us assume that the Grand Jury report is authentic. The entire chain of reasoning that leads us to condemn Penn State’s graduate assistant and its entire football coaching staff is based on one supposed fact – that the graduate student walked into the shower room, discovered the horrific acts of the assistant coach and did nothing.

If in fact the graduate student saw rape, then he (Mr. Linder and I agree) had both a moral and a legal obligation to intervene, as well as to report it to the police. At which point, McQueary’s boss – and his boss’s boss, and so on up the line – all had an obligation to report this disgusting and despicable conduct. If they did not, they should (after due process) be thrown in jail.

So if this story is true, why didn’t the graduate either intervene or call the police? And why did the coaching staff and the administration, having (in this version of the narrative) heard a clear report of child rape, not call the police to investigate?

People offer several possible explanations for McQueary’s failure to act, each an indictment of his moral character. It has been suggested that perhaps the graduate student was so cowed by the Paterno mystique that he was unable to bring himself to accuse one of Paterno’s gang. Or that perhaps he was a moral coward. Or perhaps he was afraid of the perpetrator.

But I would like to suggest another explanation. Perhaps what McQueary saw is what most eyewitnesses see: incomplete facts, partial evidence, suspicious but unclear patterns of behavior. That he later testified that he saw clearly identifiable conduct (“rape”) is typical of human beings in general: we weave the patterns together after the fact into a coherent (and sometimes mistaken) explanation. So if he saw conduct that was unclear-but-suspicious, that explains why his report to his boss (and his boss’ report to his boss) were less than a full report of rape.

There are other possible explanations. The administration claims that they didn’t act on child rape because neither McQueary nor the coaching staff ever told them of a rape—only that he saw something upset him. For his part, McQueary now claims that he stopped the assault, and talked with police. We lawyers hear these as self-serving exculpatory statements. Are they true? We can’t know.

I’ve been working in the justice system for 30 years. I’ve prosecuted criminals and I’ve defended them. I’m as jaded about human nature as only a person who works in the justice system can be. But I find it inconceivable that any human being, witnessing what is clearly and unambiguously rape, would fail to at least verbally challenge the conduct (“Hey! What’s going on in there?”) – if not physically intervene. Add the fact that the victim was a 10-year-old boy makes it even more unlikely that a witness to a rape would walk away. Add all of these aggravating factors together – the homosexual rape of a child by an adult – it is beyond our experience that an eyewitness would not physically intervene.

As Occam’s razor and Sherlock Holmes and the Talmud, too, instruct us: The simplest and most likely explanation of human behavior is usually the correct one. At least, it’s the place we start until we know more facts. That simple explanation here is that McQueary did not intervene because he did not clearly see a sexual assault — or, as he now claims, that the initial stories of his conduct were wrong and that he did, in fact, intervene.

None of us knows what happened. We all have our suspicions about who did what to whom, and who did not do enough. But Mr. Linder and I agree on this, too: The Torah demands more of us than prejudgment. It demands that we not judge the moral conduct of the actors without knowing what the actors actually saw and what they actually did. Let’s douse the torches and put down the pitchforks until then.

Brad Elbein is an attorney in Atlanta, Georgia. His writing has won a number of contests and appeared in a wide variety of publications, including academic journals, magazines, newspapers and on line. Three days a week he learns Talmud with Harve Linder at the Atlanta Scholar’s Kollel.

The Bigotry of Intersectionality