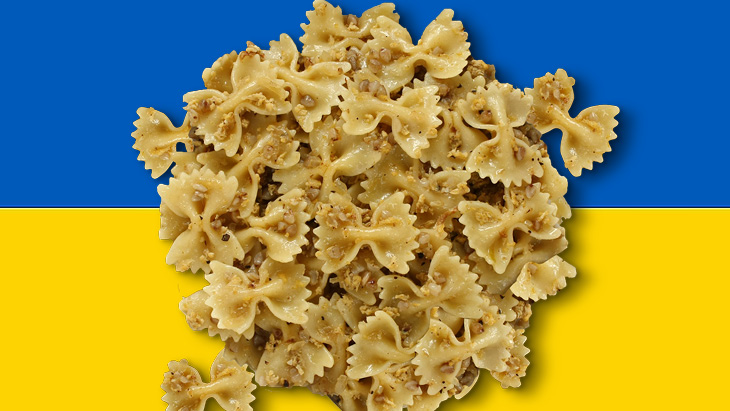 Some of the most beloved Jewish dishes have their roots in Ukraine.

Before the Holocaust, Ukraine was home to over 1.5 million. Jews made up nearly 5% of Ukraine’s population. Over 40,000 Jews still called Ukraine home, until Russia invaded Ukraine, sending civilians scrambling to flee.

Some of the most beloved Jewish dishes have their roots in Ukraine, where generations of home cooks have borrowed cooking ideas from their non-Jewish neighbors. And Jews have influenced wider Ukrainian cuisine in turn.

Here are five beloved Jewish foods that had their origins in Ukraine.

Babka is one of the most popular Jewish cakes: usually baked in a loaf pan, Jewish babka features rolled layers of yeast dough around a sweet filling, often cinnamon and nuts or – a more recent, American addition – chocolate.

Yet babka is also a beloved Ukrainian cake, albeit in slightly different form. The food historian and writer Lesley Chamberlain has speculated that babka came to Ukraine and Poland in the 1500s when Poland’s Queen Bona Sforza had her chefs adapt the popular Italian yeast cake pannetone. Like pannetone, Ukrainian babkas are tall confections, often baked in a high, rounded pan. 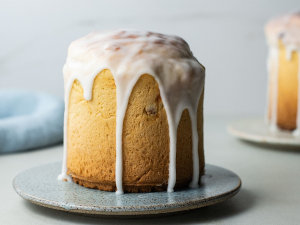 In both Ukrainian and Yiddish, baba means grandma, and this cake was likely originally named after grandmothers, whether because it was a treat that women lovingly prepared for their grandchildren or because the cake’s tall fluted shape resembled a grandmother’s long skirts. In time, the name transformed to the diminutive babka, meaning little grandmother.

Jewish cooks in Ukraine began preparing babka differently from their non-Jewish neighbors. On Fridays when Jewish women prepared challah dough, it became customary to use dough scraps to prepare small babka cakes, usually in loaf pans like bread instead of in the tall babka pans that were common in non-Jewish homes. Jewish babka also differed in being made with oil, not butter, so that it could be eaten after a meat meal on Shabbat. 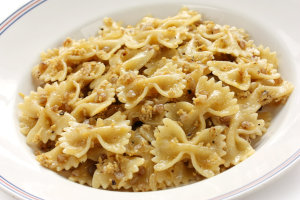 In Ukraine, two of the most iconic national foods are kasha, made of nutty-flavored cooked buckwheat, and varenyky, pockets of dough stuffed with meat or cheese or vegetables and then boiled. (Var means to boil in Ukrainian.)

Jewish cooks in Ukraine developed their own twist on varenyky, stuffing the dumplings with a mixture of caramelized onions (which was popular way of adding flavor throughout Ashkenazi Jewish cooking) and kasha. In time, Jewish cooks stopped the labor-intensive process of stuffing varenyky and simply boiled small home-made noodles and combined them with cooked kasha and caramelized onions.

The resulting dish was called Kasha Varnishkes and became widely popular in Jewish kitchens throughout eastern Europe. When Jews moved to the United States in the 20th Century, many adopted mass-produced bow-tie noodles in this classic dish, giving Kasha Varnishkes a new look for a new generation.

Potatoes weren’t widely eaten in Europe until the 1700s. Before then, Jewish cooks embraced various forms of pancakes: cheese pancakes especially were considered a Jewish food, and spread from Italian Jewish communities (who used a soft ricotta-like cheese to form the dough) in the Middle Ages to Jewish homes across Europe.

Ukrainian Jews called their pancakes latkes from the Ukrainian word for pancake, oladka.

With the discovery of potatoes in the New World, cooking practices in Europe began to change. Ukrainian cooks embraced a light, fluffy form of potato pancake made with finely grated potato and onion and fried in oil. These potato pancakes, called deruny, are one of Ukraine’s most famous national foods and are commonly eaten with butter and soft cheese like sour cream.

Jews in Ukraine made their own version of potato pancakes, sometimes frying them in oil, not butter, so that they could be served as an accompaniment to a meat meal. Ukrainian Jews called their pancakes latkes from the Ukrainian word for pancake, oladka. In time, latkes spread throughout the Jewish world, a beloved dish that is especially enjoyed on Hanukkah. 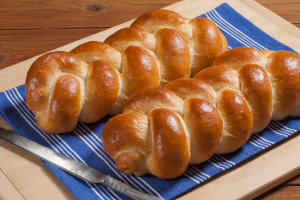 Perhaps no food is as central to Jewish identity as challah, the braided loaves of rich bread that adorn Shabbat tables in Jewish homes across the world. Yet Jews haven’t always eaten challah as we know it.

It’s customary on Shabbat to have two loaves of bread, recalling the double portion of manna that God gave to our ancestors every Friday as they wandered in the wilderness after the Exodus from Egypt. For years, these loaves didn’t have one particular name: they’ve sometimes been called broches (Yiddish for blessings) or lachamim (Hebrew for breads).

The name challah began to be applied to special Shabbat bread in the 1400s in Austria, and soon spread to other Jewish communities. At about that time, European cooks – both Jewish and Gentile – began to experiment with creating rich breads – sometimes containing additives like nuts or fruit – that were formed into elaborate braids before being baked. Ukrainian bakers began creating egg-infused breads called kolach which today are a popular Christmas treat. Jews began making egg-infused sweet braided loaves too, but with a key difference: Jewish challah bread, as it soon became known, was made with oil instead of butter. 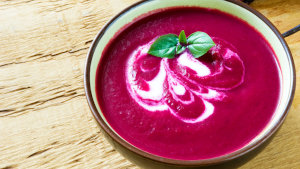 The original borscht soup was invented in Ukraine, and it wasn’t very appetizing. In the Middle Ages, Ukrainian peasants used to pick a bitter white root vegetable called borsh (cow parsnips in English) and use these sharp vegetables as the basis for a soup. When they could find other vegetables, families would add ingredients like mushrooms or cabbage to their borscht soup. Since this early version of borscht was so bitter-tasting, it was common to stir in some smetana, a sour cream-like cheese, to cut the sharp taste.

Jews in Ukraine prepared borscht like their non-Jewish neighbors, driven to cook this dish out of poverty and scarceness. Borscht took a turn for the better during the Renaissance, when farmers in Ukraine and elsewhere in eastern Europe began to grow beets, a hardy vegetable with a much sweeter taste than cow parsnips. Ukrainian cooks began to make borscht soup out of beets, keeping the name of their original soup.

It was at this point that Jewish borscht and Ukrainian borscht began to diverge. When they could afford it, Ukrainian cooks added meat, beans and other vegetables to their borsch soups. Then, at the table, they added the traditional smetana to their borscht. Jewish cooks began to create two very different types of borscht: thick, hearty meat-based borscht soups, and thin ones that were vegetarian, which they could enjoy with smetana. When Jews immigrated in large numbers to the United States, it was this second type of Jewish Ukrainian borscht that became most popular, and today many Jews associate borscht with a light pink colored soup, made from beets and flavored with sour cream.

Stay Out of the Kitchen this Passover

A Mexican Sukkot Menu
For Every Individual, A Torah Scroll
Allegiance To The Monarch
Meet the Real You: Yom Kippur
Comments
MOST POPULAR IN Family
Our privacy policy
Aish.com Is Looking for Great Writers