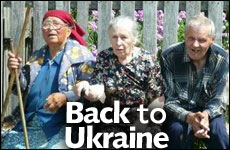 I have set out from Israel to Ukraine to trace my ancestors. My first stop is west of Kiev, in a corner of the czarist-era Pale of Settlement for Jews, where “Fiddler on the Roof” was set. Here sits an old Jewish cemetery, now a plowed-over field. It bears not a single headstone, just a house-like memorial for the late-19th-century maggid, or preacher, Mordechai of Chernobyl, my paternal ancestor five generations back.

I continue on, more than 250 miles, to the outskirts of Khotyn, a 1,000-year-old Bessarabian fortress city beside the Dniester River. I enter another open field to connect with a far darker time. I find a 30-foot-long concrete slab, etched at its head with the names, in Hebrew, of 45 men, women and children. First are my grandfather and uncle: “The holy Rabbi Mordechai Israel Twersky and his son, Aaron.”

Following a Jewish tradition, I remove my shoes. This is sacred ground — one of three mass graves in the city, containing in all an estimated 1,900 Jews who perished early in the Holocaust, 70 years ago this summer.

“The earth shifted for days,” an old, toothless man tells me in Russian. He is one of Khotyn’s 15 remaining Jews and among the minyan, or quorum for worship, who accompany me. “They couldn’t bury them fast enough.”

Related Article: Back to the Shtetl

In this quiet city, where 15,000 Jews once thrived, I find no living witness.

I had never fully understood what happened here in 1941. Growing up in New York, I heard stories from my father, who survived five labor camps before making it to Ellis Island and becoming a rabbi. Not one to subject his three children to horrors, he focused on how his father had lived. On this visit, I wanted also to learn how my grandfather had died.

In the quiet streets of this city, where a Jewish community of 15,000 once thrived, I find no living witnesses. But I carry vivid testimonies written and spoken by Khotyn’s survivors, a guidebook from another era.

The history is complicated; it begins with the Soviet occupation in 1940 of Bessarabia and northern Bukovina, which the Nazi-Soviet pact allowed Stalin to detach from Romania. The Romanian Army’s withdrawal, and its return a year later with the invading Germans and their mobile S.S. killing units — the notorious Einsatzgruppen — unleashed a systematic Romanian-German campaign of torture, rape and mass murder. Then the Romanians deported some 23,000 Jews from the Khotyn district, which includes the city, to an occupied zone known as Transnistria.

Over a three-week period in July and August of 1941, approximately 50,000 Jews were murdered in Bessarabia and northern Bukovina, the historian Avigdor Shachan wrote in “Burning Ice: The Ghettos of Transnistria.” According to the International Commission on the Holocaust in Romania, 280,000 to 380,000 Romanian and Ukrainian Jews died in Transnistria during the war.

They were victims not just of Germany, but at least equally of Romania’s anti-Semitic government. Just days before the dictator Ion Antonescu’s henchmen murdered my grandfather, experts on the Holocaust say, his next in command, Mihai Antonescu, advised top officials about the coming deportation of Jews. The ministers, he said, could be “indifferent if history judges us as barbarians ... This is the most opportune moment in our history. If need be, use machine guns.”

On Stefan Cel Mare Street, I gaze at my grandfather’s house. A couple sits outside at a table, drinking beer. What was once a synagogue sanctuary is now a grocery store.

“Your grandfather prayed from that balcony,” says Genya Cherkes, pointing upward and narrating a history her Jewish family bequeathed to her. “On the Sabbath and holidays,” she says, “people gathered below just to hear him pray.”

Ms. Cherkes, now 60, says her grandparents told her they had hidden my grandfather and his family in their orchard (in a non-Jewish neighborhood) after the Russians evicted the Twerskys from their home, leaving them to fear being deported or shot.

As I stare at the locals, I think of the collaborators who assisted in the atrocities.

I stare at the locals. My thoughts turn to the many collaborators, Romanian and Ukrainian, who assisted the Romanian and German armies in their atrocities. “They entered the homes of Jews with axes in their hands,” Nahum Morgenstern, a survivor, said of the collaborators, in a remembrance on file at Yad Vashem, the Holocaust remembrance institution and archive in Jerusalem. “They forced the Jews to undress and took their clothing. Then they decapitated them.”

I am taken to a deserted compound about a mile away. It resembles a warehouse, with large glass windows and a high ceiling. A cow grazes outside. “In 1941 this was a girls’ school,” says one of my guides, a man named Ilya, whose mother survived the war. “Here,” he says of the Romanians and Germans, “they gathered all the city’s Jews, then picked out the Jewish leaders. Your grandfather was one of them.”

I feel that I know this compound. For years, I imagined it as I read testimonies depicting Jews’ being herded into classrooms, gasping for air, debating whether to rejoin their leaders. “I was pressed up against the second-floor window,” Mr. Shachan himself recalled when I spoke with him. He was 8 at the time.

Here, according to testimony at a war crimes tribunal held in Bucharest in 1945, Jews pleaded for their lives with a Romanian police commander who, in quieter times, had engaged Jews in fluent Yiddish. But he told the assembled Jews that day that he had a new name: “My name is Hitler.”

I open my briefcase. I show Ilya an account from the Yad Vashem archives. A Jew, sensing the end was near, asked Rabbi Twersky to make sense of it all. “It will be good,” the rabbi replied, in Yiddish. “One must always have faith.”

We trace the path taken by the doomed Jewish leaders — doctors, lawyers and teachers, but also scribes, butchers and pharmacists — along the Dniester River, where hundreds of Khotyn’s Jews were shot. My grandfather was seen breaking from the line. “He jumped into the river to purify himself,” according to testimony from a survivor, Rachela Katz, cited in “On the Roads of Exile: Memories, 1941-1945” by Solomon Shapira. “The soldiers pulled him out and beat him.”

We arrive at the spot — a foul-smelling marsh — where, in Ms. Katz’s account, the Jews were forced to dig their own grave. There is an eerie quiet. The grass is high and thick. I recite psalms and a prayer for the dead, El Moleh Rachamim (God Full of Compassion). I read from Ezekiel, “Son of man, can these bones live?”

Roosters are crowing now, seemingly louder and louder. To these ears it is a piercing, heckling sound — Tevye’s roosters sounding out an impudent “Taps” for a community where real Tevyes once lived.

A towering poplar engulfs the grave in its soothing, protective shade. “It is a sign,” one Jew tells me in Russian. “Life can still sprout here.”

Time is short. I must travel to Murafa, where my grandmother Batsheva, Rabbi Twersky’s wife, rests. She died there of malnutrition and typhus in a ghetto set up by Romanian authorities in 1942.

Before leaving, I ask Ms. Cherkes, who tends Khotyn’s centuries-old Jewish cemetery and the graves of her forebears, how she can still live in a city where the martyrs so far exceed the remaining Jews.

“You can’t begin to understand,” she says, annoyed by the question but forcing a smile. “You will never understand.”

This op-ed originally appeared in the New York Times.

Mordechai I. Twersky, a freelance writer and broadcast journalist, is a doctoral student in Jewish history at Bar-Ilan University in Ramat Gan, Israel.

Facing Goliath
Blessing on Chewing Gum
Was Rahab a Prostitute?
Extras In Our Own Epic
Comments
MOST POPULAR IN Spirituality
Our privacy policy