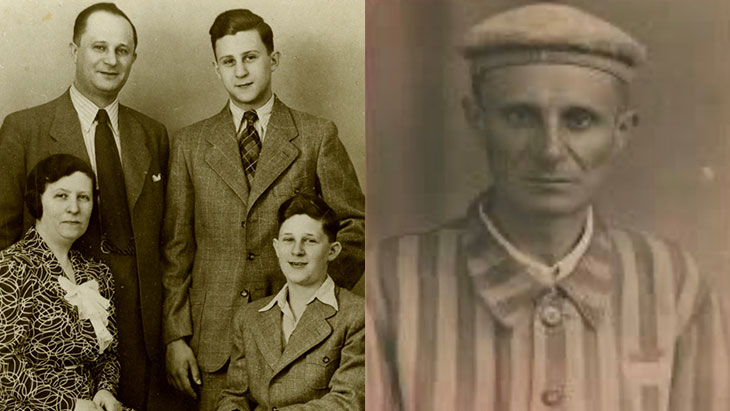 My grandfather insisted on being buried in his Auschwitz uniform. 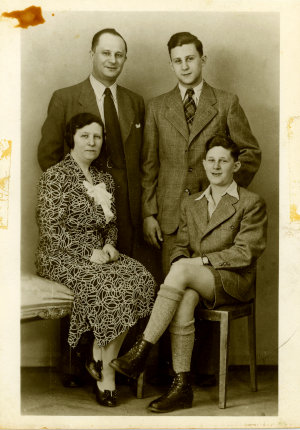 While the sepia photograph of my father’s Bar Mitzvah in Berlin, 1938 was prominently displayed in our living room, to me it was in always in the background. I knew my father’s parents and brother were in the photo along with my father who was wearing a wool blazer, shorts, and knee-high socks. At the time, I had no reason to know more.

That changed in 2016 when I started writing the story of my father, Fred Bachner, who survived several concentration camps including Auschwitz and passed away in 2008. I picked up the photograph that was still in my mother’s living room and saw details I had not noticed before.

I looked at the face of my grandmother, Erna Bachner, who was murdered at Auschwitz, hoping to know her as the Mutti my father adored. I was disheartened and confused why she appeared pensive and sad. This should have been a joyous occasion, but it was October 1938 in Berlin, a few weeks before Kristallnacht, and there were reasons for her to be worried.

My grandfather, Abraham Bachner, survived Auschwitz. In the photo he is standing straight and smiling, looking proud of his son. Looking back on 25 years of memories and images of my grandfather, whether it was a joyous occasion or a Sunday get-together with his two sons and four grandchildren, there was never another time I saw him smiling. As the family posed for the photo, I imagine they had no idea this would be the last family portrait and only remaining picture of all four Bachners.

Growing up, my grandfather remained a mystery. All I knew was that he was a Holocaust survivor, spoke with an accent, wore bifocals, and walked with a limp, an injury sustained when a New York City bus hit him in the 1950s, or so I was led to believe. The only comments I remember him saying to me were, “There’s room for improvement” when I showed him my Hebrew School report card, even though most of my grades were As, and “It could be better” the time I baked Pillsbury Poppin’ Fresh Cinnamon Rolls. His childhood in Poland and his life in Berlin before the war were never discussed and the “H” word was never mentioned.

Abraham Bachner passed away on December 8, 1980 at 85 years old. At the funeral, Rabbi Fabian Schoenfeld of Young Israel of Kew Garden Hills told the mourners Abraham’s final request was to be buried in his Auschwitz uniform. The Rabbi explained that initially he did not understand the request and reminded Abraham as an observant Jew he should be buried in the traditional shroud. Abraham insisted that at his time of judgment, he wanted the Almighty to look at whatever sins he had committed and weigh them against the years of torture and starvation he had endured during the Holocaust. The uniform would be a reminder.

I did not know my grandfather kept his uniform or understand why he wanted to be buried with it, but unlike my aunt and uncle who let it be known they thought the uniform should have been saved for posterity, I knew the uniform belonged with my grandfather.

Since his passing, I continued to wonder the reasons behind my grandfather’s request. It was clearly significant enough that Holocaust scholar and educator Yaffa Eliach included it as a chapter in her book, Hassidic Tales of the Holocaust, and Benjamin Mead, founder of WAGRO told the story at the Yom HaShoah commemoration at Temple Emanuel in Manhattan in 1981. Despite reading the chapter many times, it was not until recently when I gained an understanding of my grandfather and his request.

My trip to Poland in 2018 was a turning point in my relationship with my grandfather. I visited Chrzanow, the city he was born in and where he and his family returned to in 1939 when forced out of Germany. I stood outside the house they lived in and were later dragged out of during the roundups to Auschwitz. I said Kaddish and left a stone at the grave of his father, Shimon Josef, who died in a fire in 1898 when my grandfather was three years old and at the grave of his grandfather, Aron, who died in 1855. I felt my grandfather’s presence.

It was not until I stood outside the gates to Auschwitz that I realized when the war ended my grandfather was 50 years old and had been in labor and concentration camps for five years. Everything shifted for me as I came to understand and love him as the strong and brave person he had to be in order to survive. I also realized my grandfather’s request to be buried along with the uniform was his way of telling us he knew he was not the best version of who he had been before the Holocaust. 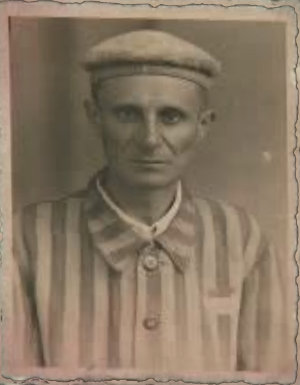 I thought my journey was complete, but there was still more. I continued researching my family’s history and recently found a new document. I never imagined it would be a picture of my grandfather in 1945, still wearing the uniform he wore in Auschwitz. He was thin, his eyes sunken, and he had a blank stare. It is hard to believe the picture of him at my father’s Bar Mitzvah was taken only seven years earlier. All the life was sucked out of him and he appears “broken.”

The contrast between the two photographs serves as reminder of the enormity of what he endured. Abraham Bachner survived the Holocaust, but so much of him had not.

Ellen Bachner Greenberg is co-founder and president of 2G Greater New York, a forum for children of Holocaust survivors worldwide to discuss their shared experiences and learn about and teach Holocaust remembrance. Programs are held in partnership with the Museum of Jewish Heritage - A Living Memorial to the Holocaust in New York and online. Ellen runs 2G Discussion Groups for Children of Holocaust Survivors. For more information, visit us on Facebook or email 2GGreaterNewYork@gmail.com

Selma Engel, Witness to Sobibor
The Promise Of The Land
Which Chat Are You On?: Parshas Behar/Lag Ba’Omer
Do You Like Slow-Cooked Food? Thank the Jews
Comments
MOST POPULAR IN Jewish Society
Our privacy policy