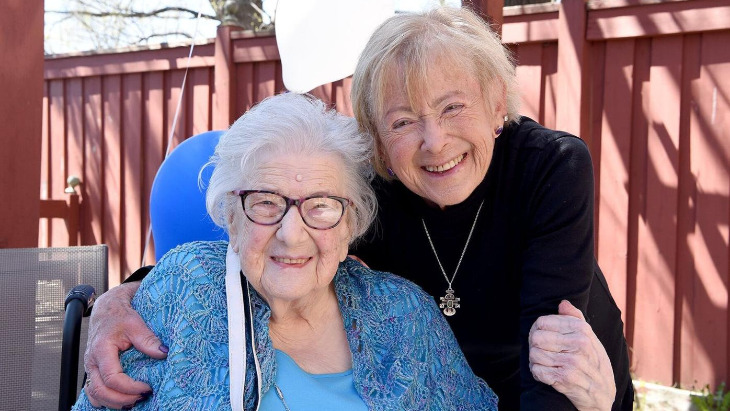 Due to the war, Gerda Cole was forced to give up her daughter. The 98-year-old was reunited for the first time with her 80-year-old daughter.

Gerda Cole left her family and world behind when she was just 15 years old. The year was 1939, and Gerda’s native city of Vienna had become a hell for Jews.

Germany had absorbed the Austrian Republic the year before in the Anschluss (German for “union”) and Vienna was now part of the Nazi Reich. Home to nearly 200,000 Jews, Viennese Jews were being stripped of their rights and dignity.

One of the Nazis’ first actions in Vienna was to outlaw Jewish communal organizations and send their leaders to the Dachau concentration camp. Jews were forbidden from many professions and hundreds of businesses were forcibly seized from Jewish owners. If any Jews in Vienna doubted the brutal hatred that was directed against them, the night of November 9, 1938 dispelled any lingering hope that there was a future for them. 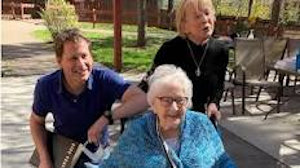 Throughout Germany and Austria, mobs attacked Jews and their homes, synagogues, and businesses. Known as Kristallnacht, the Night of Broken Glass, the mobs were particularly virulent in Vienna. Nearly all of the city’s synagogues were burned to the ground. Twenty-seven Jews were murdered and 6,000 Jews were arrested and sent to Dachau.

In the midst of this horror, a group of Jewish and non-Jewish activists offered a lifeline to some Jewish children in Austria and Germany. Britain had agreed to accept refugees from Nazi Germany (including Austria) who were aged 16 or younger. Parents would not be allowed to accompany their children. Despite the trauma of sending away young children into the unknown, thousands of Jewish families leapt at the chance to send their precious children to safety. Between 1938 and roughly 1940, about 10,000 children escaped Austria and Germany, nearly all finding safe refuge in Britain on what became known as the Kindertransport. Gerda Cole was one of those unaccompanied children.

Life in Britain was hard. Gerda wed very young and the marriage was an unhappy one. Gerda became pregnant with a daughter, but by the time her baby was born in 1942 when Gerda was 18 years old, her marriage was already ending.

“I had very limited personal education,” Gerda recently explained. She was destitute. “This, combined with wartime, left me no recourse but to have the baby adopted under the advice of the refugee committee,” Gerda explained. (The Refugee Committee was part of the Central British Fund for German Jewry, one of the major groups working to bring Jewish refugees to Britain and to look after them once they arrived.) “It was hard,” Gerda told The Washington Post. If she had been in a better position, she would have tried to keep her daughter.

Gerda agreed to give her baby up for adoption to a German couple who was living in the United Kingdom. The terms of the adoption agreement were clear: Gerda could have no contact with her child after the adoption. There was only one act that Gerda was allowed to perform for her new baby, giving her a name. Gerda named her daughter Sonya, though she had no way of knowing if her baby’s new parents would keep the moniker. 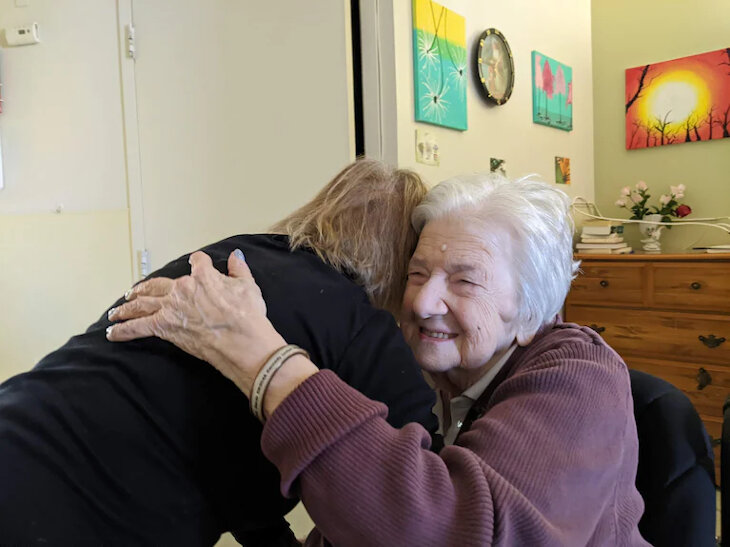 Gerda went on to wed four more times. While her romantic life seems to have been tumultuous, she developed a deep passion for education and archeology. She worked as an accountant and took on a part time job at a Burger King to help fund her global travels. A keen archeologist, Gerda has spent much time volunteering on digs in Israel. In 1965, she moved to Canada where she began to study. She eventually earned three degrees, including an honors BA in Jewish Studies from the University of Toronto.

Though she has stepchildren and step grandchildren, Gerda never had another biological child after Sonya. She often thought of the daughter she’d given up for adoption, but had no way to contact her.

Then, in recent weeks, something miraculous occurred.

Sonya Grist (she did keep the name) is now a retired tour guide living in England. She grew up curious about her biological parents, married and had three children. One of her sons, Stephen, has been curious about his heritage and even considered applying for Austrian citizenship, based on his mother’s Austrian heritage. Through the years, Stephen turned to online research to learn more about his family. “I would spend an hour a night going down these rabbit holes and finding out remarkable information along the way,” he explained. He knew the names of his mother’s biological parents and was trying to find information about them.

Recently, Stephen tracked down somebody he thought might be related to his grandmother and contacted him through Facebook. It turns out he was Gerda’s step grandson. Stephen explained that he was researching his family heritage and asked the man if he could provide him with Gerda’s death certificate. “You won’t find her death certificate,” the man replied, “because she’s still alive.”

Stephen was shocked. His biological grandmother is now 98 years old. Sonya is 80 and had long wanted to know about her birth parents. She’d tried to locate them through the years but with no success. Stephen waited for two weeks, mulling how to break the news to his mother, then eventually told her what he’d found. “My first reaction was, I want to go and see her,” Sonya explained. 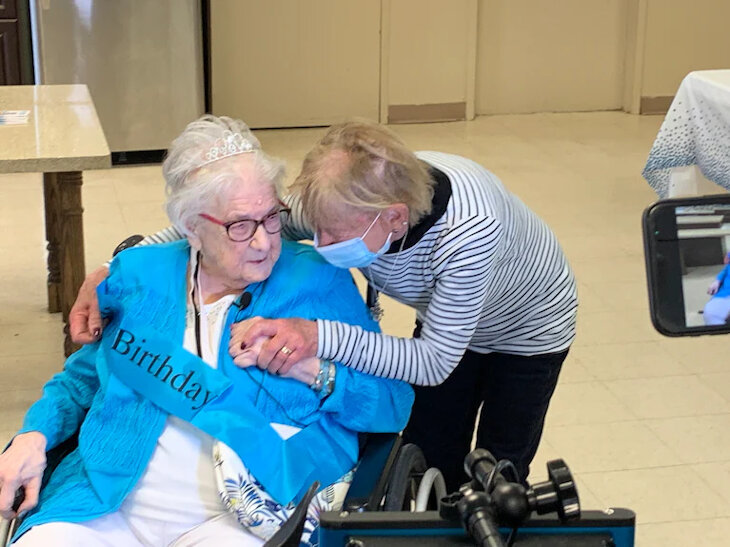 Last month, she and Stephen decided to fly to Toronto, where Gerda lives in a retirement home. The day after they arrived - May 7, 2022 - was Gerda’s 98th birthday and also Canada’s Mother’s Day. The moment could not have been more fortuitous. Staff at Gerda’s home decorated their party room for the big event in blue, Gerda’s favorite color. Gerda donned a crown and sash, and entered the room, ready to meet her long lost daughter at last.

When Sonya and Gerda embraced, they dissolved into tears. They discovered they have many similar traits, including their love of travel and adventure and of learning new languages. Sonya is “a little bit of me,” Gerda explained at the party. “I made so many mistakes, and yet she went looking for me and found me,” Gerda said.

Sonya told reporters at the party that she understood the pressures her mother had been under when she gave her up for adoption: “I bear no malice, no grudges, no nothing.”

For Gerda, the meeting felt like a gift. “It was incredible. When I heard, I just couldn’t believe it. This must be a miracle. It means so much to me… was definitely the best thing that has happened to me.”

Now that she’s been reunited with Sonya and her grandchildren, Gerda has one final wish: “I would love to join their family. At this point, there is nothing more I would like than to be together.”

To Remain a Jew: The Untold Story of Luciano Camerino

SS Guard who Fell in Love with a Jew in Auschwitz
It Takes A Lot Of Faith To Be An Atheist
How Instagram Brought Back This Nostalgic Soup
What Makes Eli Run?
Comments
MOST POPULAR IN Israel
Our privacy policy