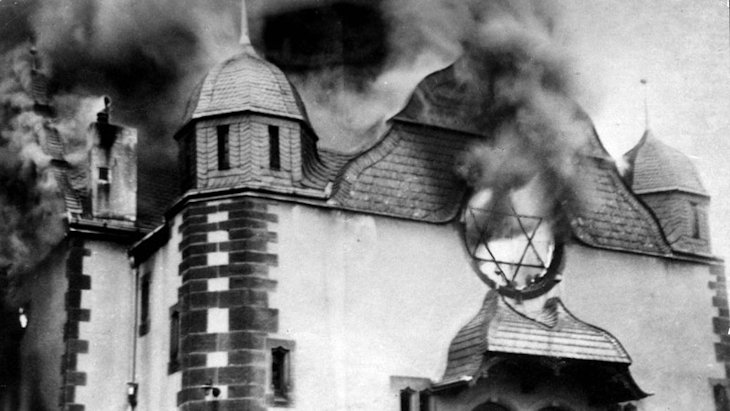 Celebrating my grandson's bar mitzvah in the shadows of Kristallnacht.

I feel a sudden jolt as I listen to my oldest grandchild deliver his Bar Mitzvah speech. Being orphaned from my own grandparents, I don’t take my role as a grandmother, or being able to take part in this Bar Mitzvah celebration for granted. Grandparenthood comes with its unique privileges, but it has its own set of responsibilities too. It hit me that this Bar Mitzvah celebration was taking place only weeks before the 82nd anniversary of Kristallnacht - the night the Bar Mitzvah boy’s great-great-grandfather, Hugo Alperowitz, was arrested by the Nazis for being a mohel, chazzan, shochet and teacher of Torah.

His home was ransacked, and his library of Jewish books was removed and burned while his wife and seven-year-old daughter (my mother) stood defenseless and terrorized as they witnessed his arrest and the ensuing carnage.

I suddenly realized that I had yet to tell my grandson this piece of family history. It belongs to him and I’ve neglected to hand it down. How had I allowed myself to collude with my parents and continue their legacy of silence?

Although my father was a Holocaust survivor and my mother a Holocaust refugee, they almost never spoke to us children about what they went through. Thinking about it more, I had to acknowledge that I too had passed this legacy of secrecy to my own children. They knew that my parents, their grandparents, had lived through the Holocaust, but details were less than scarce. I had few details to share with them. It wasn’t until my children became young adults that I found the courage to try to discover more about what my parents had gone through.

Burying the memories and feelings might have seemed like the best thing to do, but when feelings aren’t processed, they get buried alive.

I understood my parents' motivation to shield us from knowing about the atrocities they survived. Exploring their personal history was frightening. I wondered whether I had the emotional resources to confront the discoveries I would make. My parents did not pass on information, but they did pass on the trauma and the mere thought of knowing more felt traumatizing to me. Burying the memories and feelings might have seemed like the best thing to do, but when feelings aren’t processed, they get buried alive.

This became clear to me years earlier when my father began talking to me about Mauthausen, another story the Bar Mitzvah boy doesn’t know. My father had never spoken about his years in the labor camps, so it surprised me when he began telling me about it. He said he was a physically strong teenager, and, like thousands of other Polish Jews, he worked in the quarry moving heavy stones. One day, he was carrying an unusually heavy stone, and while struggling with its weight, dropped it on his foot. It probably fractured his bones and he could barely stand. 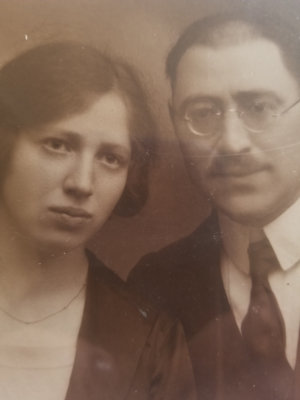 They transferred him to kitchen duty for a short time. He told me that this was glicklich, fortunate, because while working in the kitchen, he might get away with stealing a few potato peels. It was risky but he was starving, and stealing the peels seemed worth the risk. He wanted to share his good fortune, so my father passed some scraps to his friend. That fellow was not so fortunate. The Nazis caught him gripping the peels in his hand.

My father quivered uncontrollably and sobbed. I realized that he had never spoken about it in the forty years since it happened.

When my father reached this point in his narrative, his body started shuddering. I had never seen anything like it before. He was quivering uncontrollably and sobbed. I realized that he had never spoken about it in the forty years since it happened. His feelings, the feelings he never allowed himself to feel before, overwhelmed him. My father was indeed a strong man. He carried the quarry stones during his years in Mauthausen, and he carried the memory of watching his friend die for the crime of having potato peels my father had given him.

I don’t really want to tell the bar Mitzvah boy this story either. Like my father, I prefer to keep it buried. I think again about his great-great-grandfather, Hugo Alperowitz, his great-grandmother, my mother, their untold story and my grandson’s unclaimed legacy.

Kristallnacht, The Night of Broken Glass, was an atrocity that forced my grandmother to seek refuge in Switzerland, her country of birth. After she placed my mother in a children’s home, she took the risk of returning to Germany to free her husband from Dachau. My seven-year-old mother remained in the children’s home for months, not knowing if she would ever see her parents again.

Often, traumatic memories cannot be expressed verbally because they're not encoded with words; they're expressed through vivid sensations and images. Both my father and my mother showed me this; my father when his body trembled recalling that fortunate day in Mauthausen, and my mother, by remembering nothing about her life following Kristallnacht. To this day, all she recalls is the heavy thumping of the Nazi jackboots approaching her house, the pounding on the door, and her body freezing in terror.

Our bodies express our emotions, and it is no wonder that thirteen years ago, when I received the news of my grandson’s birth, I began dancing; an expression of pure joy. Thirteen years later, I watched the Bar Mitzvah boy dancing and singing with his friends. The boys sang songs of thanks, songs of Jewish pride, and songs of eternal hope. Although there was a broad smile on my face, my lips were quivering, and my body was trembling. Tears streamed down my face - tears of joy mixed with tears of sorrow.

After I videoed the boys dancing, I fantasized about going back in time with this video clip. Would the thousands of prisoners in Mauthausen have believed me if I had told them to look at the future? Could they believe that the Jewish people would not be completely extinguished in the crematoria, that not everyone would be martyred, that not all of them would turn into a wisp of black smoke, ascending towards heaven?

I wondered why my body trembled and why I couldn’t remain focused on the joy of the moment. What message was my body expressing? Was it related to how my father’s body shook as he told me the story of the stolen potato peels?

I’m sure it was. I am more an artist than a scientist, but the science of epigenetics reveals that the history we share with our parents begins before we are born and even before we are conceived. The precursor cells from which we developed were in our parents’ bodies before our conception, and these cells were impacted by the trauma our parents experienced. According to the pioneering cell biologist, Bruce Lipton, “[s]ignals from the environment could operate through the cell membrane, controlling the behavior and physiology of the cell.”

Mark Wolynn, a family therapist and author of the book It Didn’t Start with You, explains, “We now have a window of understanding into how cellular memory is transferred in the womb from a mother to her unborn child. The mother’s emotions such as fear, anger, love, hope, among others can biochemically alter the genetic expression of her offspring.”

Parents' chronic emotions can be imprinted on their child, impacting how the child will respond to their environment. Epigenetics helps me understand why I trembled and cried when I saw a group of thirteen-year-old boys dancing, having fun, and celebrating my grandson’s transition into adulthood. It helps me understand why I sometimes feel alone, even when surrounded by my loving family. The untold stories of my life as the daughter of Holocaust survivors yearn for release through expression, and what I’ve written here is the beginning of my own story - just the beginning.

Searching for Jews Saved by the Angel of Budapest
Blessing on Chewing Gum
Was Rahab a Prostitute?
Extras In Our Own Epic
Comments
MOST POPULAR IN Israel
Our privacy policy