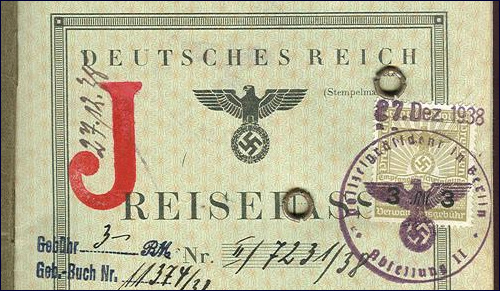 As a boy in Germany, seeing that Judenstempel on his passport made him realize that for the Nazis he was nothing but a Jewish object.

My father’s friend left Germany toward the end of 1938. Amid the horrors of Nazi Germany, his family debated a topic which echoed through many Jewish living rooms: Should they leave Germany or stay?

This man – then a boy – was devastated by the spreading anti-Semitism. But how could he and his family abandon all they knew? Conditions in Germany were certain to improve. Germans would come to their senses. Perhaps this was youthful optimism but he was not alone. Of the half million Jews who lived in Germany in 1933, over 200,000 remained.

His parents decided to get out of Germany, and the boy was heart-broken. It was only after he saw something on a particular piece of paper that he understood Jews had no place in the “new” Germany. 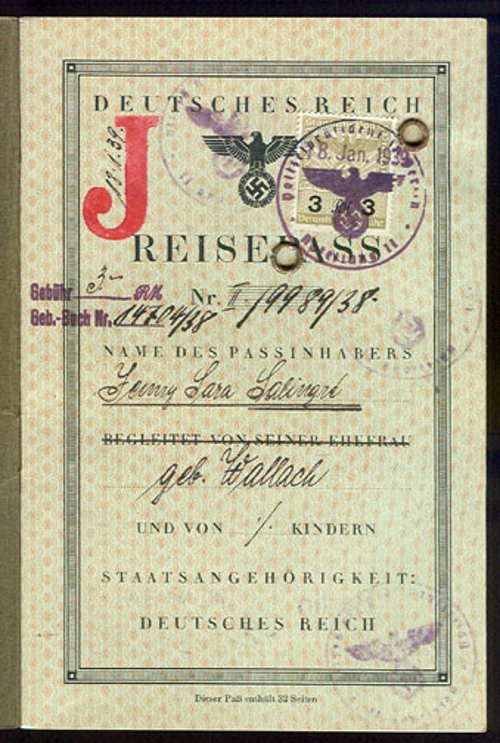 Earlier in the year, the government decreed Jewish passports were invalid as of October 5, 1938. Jews were required to turn in existing passports which would then become valid only when stamped with a red ‘J’. This Judenstempel allowed other countries to more easily identify which Germans were Jewish refugees and turn them away. The color red made the Judenstempel easier to detect. Red meant danger. Warning. Beware.

Was this a Nazi idea? A Swiss one? The boy did not care. The German government enacted this law. It was another measure to denigrate those who were “out.” It kept Jews from pretending to be something other than what they were. After all, the most dangerous Jews were ones who tried to blend in with the good German Volk.

During the years leading up to the passport incident, this boy had suffered and witnessed the suffering of others. But seeing this ‘J’ stamped on a legal document bearing his photograph and name was the first time he realized that for the Nazis, he was nothing but a Jewish object.

“Now no one had to figure me out. The 'J' told them all they needed to know.”

The “J” stamped out his uniqueness. He and the label became the same. It didn’t matter if he was smart, funny or creative. No one cared about his aspirations and the sports he loved to play. This young German boy left behind the familiar, his language and the people who stayed and had their futures stolen.

Despite fears regarding his own future, he went without protest because he rejected the government's attempts to turn him into an object. He didn’t realize in 1938 that a red ‘J’ was paving the way for yellow Stars and tattooed numbers.

He created a new life in a new country. He grew up, married and had children. And he experienced such joy in synagogue, praying as part of a Jewish community. He recognized the value of that community and the oneness of the Jewish people. But he also understood our community strengthens when each person maximizes his own potential. Minimizing the uniqueness of an individual weakens all Jews.

This man spent a lifetime blocking out events he witnessed but each October, he recalled the horror he experienced upon viewing the red ‘J’ stamped on his passport for the first time. Each October, he felt especially grateful as he prayed alongside other Jews. He appreciated that each person he prayed with had distinctive traits and could never be an object.

Unfortunately, labels continue to pervade our society, and just like the red “J” of 1938, they provide an excuse to cast empathy aside. They justify hateful rhetoric and cruel behavior. We must all find inspiration in the wisdom of my father’s friend. He understood everyone has his own story, and that even something as small as a single letter discourages us from looking into each other’s hearts.

When My World Imploded: Facing Ghosts in Bavaria
Faith: the Axis Upon Which the Wheel of Science Turns
Love - Not Just About Chemicals Anymore!
Is There a Moral Code in a Virtual World?
Comments
MOST POPULAR IN Israel
Our privacy policy