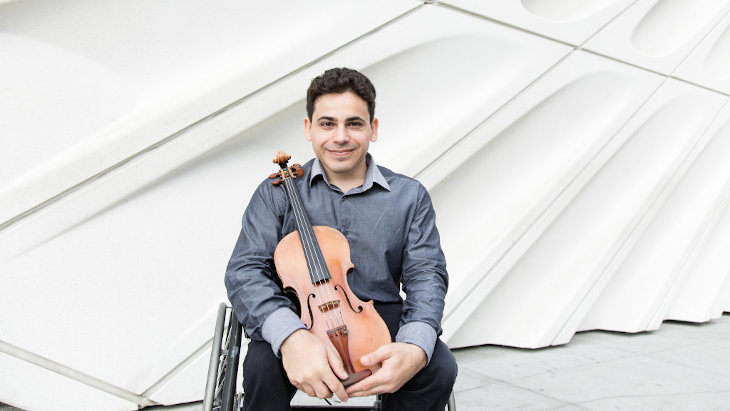 Niv Ashkenazi's new album featuring instruments and music by composers that were affected by the Holocaust.

When Niv Ashkenazi was 23, fresh out of completing his MA at the renown musical school Juilliard, he received an invitation that would change his life. Would he like to play some violins that have a unique connection to the Holocaust?

The invitation came from Amnon Weinstein, a Tel Aviv violin restorer and his son Avshalom. Amnon’s parents Moshe and Golda were Holocaust survivors: both musicians, after the Holocaust they found refuge in Israel and opened a violin shop in Tel Aviv. Amnon and Avshalom built on their legacy, collecting violins, particularly instruments that were played during the darkest days of the Holocaust. They founded “Violins of Hope” which educates audiences around the world about the Holocaust, explaining the incredible stories behind musical instruments. Some were played in concentration camps; some were played by musicians murdered in the Holocaust; at least one was used to transport explosives by a young Jewish resistance fighter to blow up a Nazi outpost.

Niv tried each of the remarkable instruments the Weinsteins had brought, savoring their unique feel and sounds. “You can feel the history behind them,” he noted in a recent Aish.com exclusive interview.

One violin in particular intrigued him: a wooden violin with two Jewish stars inlaid into the wood, a small metal star on the front of the instrument and a large Jewish star made of inlaid shell on the back. The front of the violin was noticeably darker than the back. “I didn’t like it at first,” Niv recalls. Yet the more he played, the more the violin seemed to speak to him. “It grew on me.” 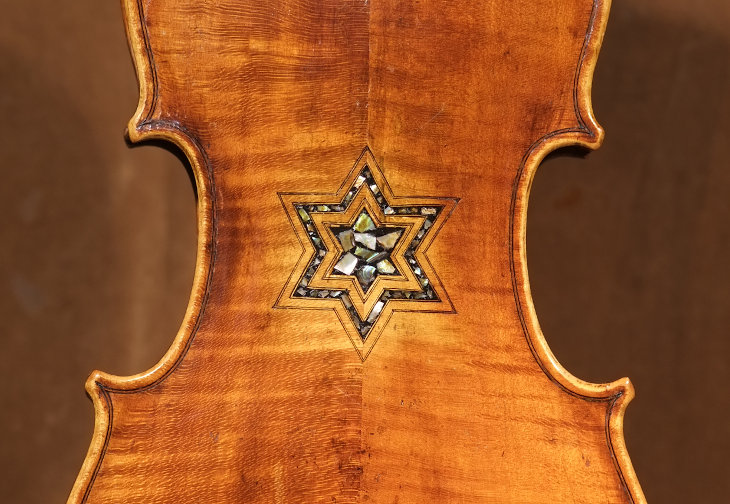 Before long Niv had developed a unique relationship with the distinctive violin, and he learned about its history. It was handmade in the early 1900s in Yugoslavia. While the name of the owner has been lost to history, the Jewish stars on his violin indicate that he was possibly a wedding violinist; at that time it was common for Jewish musicians to decorate their violins and other instruments with Jewish Stars of David. The lighter color on the back of the violin indicates that it was likely hung on the owner’s wall as a piece of art when it wasn’t being played; the beautiful Jewish star on its back would have provided color and beauty in its Jewish owner’s home.

It’s possible that the original owner of the violin was murdered in the Holocaust. Amnon and Avshalom Weinstein spent years lovingly restoring it and made Niv an offer: would he like to keep the violin on a permanent loan, playing it and telling its story? Niv jumped at the chance. Now, he’s played it on his new album, “Violins of Hope”, making sure that a new generation can learn about the Holocaust through music. 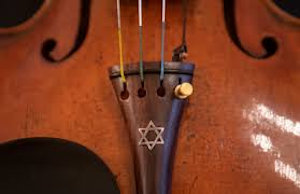 One such track is “Serenade”, the only surviving known piece by the Jewish composer Robert Dauber. Robert’s father Adolf was a world-famous violinist and conductor, and Robert followed in his footsteps, becoming an accomplished musician and composer. He was deported to the Theresienstadt concentration camp while he was still a teenager. Theresienstadt was designed by the Nazis as a “model” camp where Jews were forced to pretend that they were enjoying an idyllic existence for the benefit of international visitors. The Nazis made propaganda films in the camp to show the world that they were supposedly treating Jews well even while imprisoning them. Inspectors from the Red Cross even toured Theresienstadt and allowed themselves to be convinced that the conditions there were benign.

Robert Dauber was allowed to play in the Theresienstadt orchestra, made up of Jewish prisoners, and he wrote “Serenade” there when he was twenty. He was later sent to Auschwitz and then to Dachau where he died of typhoid in 1945. The beauty of his other compositions is lost to us, but in Niv’s masterful playing and a piano accompaniment, audiences can once again hear the luscious, joyous melody that Robert Dauber created, even amid his darkest time.

Another notable inclusion in the album is Trois pieces de concert by the celebrated Jewish composer Szymon Laks. When Germany invaded Paris in 1940, Laks was already a famous composer. Born in 1902 in Warsaw, he was already well known in musical circles when the Nazis deported him, along with thousands of other Jews, to Auschwitz. 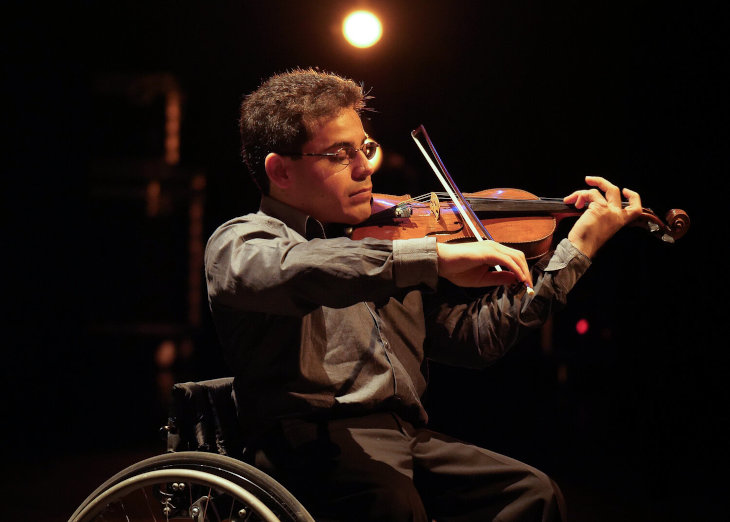 One of his first sights in that hellhole was the camp band, made up of miserable, starved, prisoners, setting up. Despite his musical fame, Laks was sent to do backbreaking manual labor and nearly died. Eventually, he managed to get transferred to the Auschwitz prisoner band. The concertmaster at the time was a non-Jewish Polish musician named Jan Zaborski who’d been arrested and sent to Auschwitz for the “crime” of giving false birth certificates to Jews in order to save their lives. Zaborski died in Auschwitz and Laks eventually became leader of the orchestra, using his position to try and improve the lot of the prisoners who were forced to play music for Nazi guards.

Laks requested that his musicians receive more practice time, which meant that they had to spend fewer hours performing back-breaking labor elsewhere in the camp. One day, Laks was ordered to have his musicians perform outside in the middle of a blizzard. Laks told the Nazi guards that the freezing cold snow might harm the instruments. (Clearly, no concern was given to the Jewish men who were playing the instruments.) Laks was successful and the orchestra was excused for playing outdoors in the storm.

At the end of the war Laks, with the other members of the Auschwitz orchestra, were moved to Dachau, then were forced on a death march. After three days, the exhausted prisoners were liberated by the American Army. Laks returned to Paris and continued his musical career, but many of his earlier compositions were destroyed. Trois pieces de concert is a fragment of his earlier work, composed before the end of the Holocaust. Written for cello and violin, it’s a lilting, melodic piece full of beauty and joy.

Working on “Violins of Hope” was an intensely personal experience for Niv, and helped bring him together with his new wife Leah Kohn, who produced the album. Niv had been playing his Holocaust-era violin in concerts and educational settings for a few years already, and had been thinking about creating a Holocaust-theme album with it. “When I mentioned it” to Leah, a classmate of his from Julliard, “she said she’d been thinking the same thing. We wanted to represent the life of this instrument.” The couple began collaborating on the album. Last September, they married.

For Leah, depicting the Holocaust is a personal mission: her grandparents were Holocaust survivors. Her mother’s mother survived Auschwitz, where most of her relatives perished, and Leah’s grandfather survived the Mauthausen death camp. They were “miraculously” reunited after the war, Niv explains. Working on “Violins of Hope” was a way to honor their memories.

While Niv’s immediate family didn’t experience the Holocaust, he’s found that working on the album deepened his interest in his family’s history. His mother is from Tel Aviv and his father is from Jerusalem. Niv grew up visiting Israel frequently – his interest in violin started when he was two and saw a street performer playing a violin on a street corner in Israel – and he’s now learning more about his family’s Sephardic heritage. "Working on the album has really opened up my eyes to the vastness of the Jewish experience.”

“Violins of Hope” was released just as the pandemic hit. While Niv has been forced to cancel his concert schedule, he’s found ways to continue reaching audiences. A recent concert to promote the album was moved online. “Over 1,300 people joined online live,” Niv explains, “and for a classical concert that’s a pretty big audience.”

More information about “Violins of Hope” can be found at https://www.nivashkenazi.com/album.

The Happiest Man on Earth: 99 Year Old Holocaust Survivor
Scientific Curiosity and the Divine Encounter
Mind Over Milkshakes
Love the Convert
Comments
MOST POPULAR IN Israel
Our privacy policy
Aish.com Is Looking for Great Writers