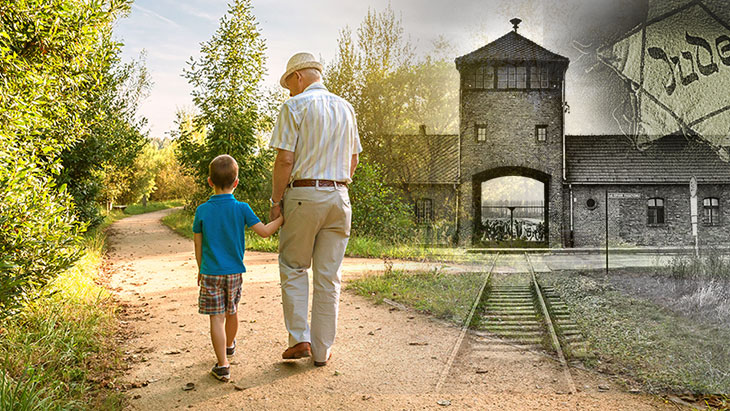 Sometimes it is the small moments that make the greatest impression on children.

Last week I met my daughter and her children at my Uncle Yanky’s (Rabbi Jacob Jungreis) house. Uncle Yanky is my mother’s oldest brother. He was born the day Hitler came to power. Full of life and blessed with a sharp memory, our time spent together is always vivid and powerful. But I didn’t really expect much for the children to absorb. After all, they are young. I thought that as the adults sat around the table and talked, the children would keep themselves busy, running and playing. But what happened taught me an incredible parenting lesson.

The children hovered and then pulled chairs over. They wanted to listen and be part of the conversation.

“Uncle Yanky lived through the Holocaust,” I said. “Don’t be shy if you want to ask any questions.”

“Were you ever hurt? What did you eat?”

“Why didn’t you just call the police to help you?”

I asked my uncle to begin at the very start of his life. He spoke about walking to school when he was six years old and being spit at, chased after, and called ‘dirty Jew’. The children’s eyes opened wide.

“Can you imagine?” I looked at my grandchildren. “Six years old, all alone and having to hear these hateful words.”

“Weren’t you scared?” one child questioned.

“Yes, of course. But what could I do? I had to walk to school. And this is how life was for the Jews.” 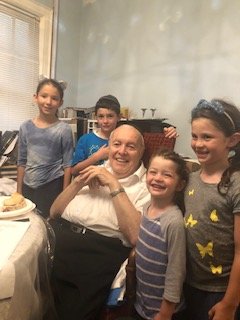 Uncle Yanky with my grandchildren.

We spoke about how my grandparents welcomed fleeing refugees into their home. My grandfather was the Chief Rabbi of Szeged, Hungary. Jews from other countries were trying to escape the round ups and the looming destiny with death. Hungary would be the last to fall. Each night desperate, frightened Jews would knock on the door. Uncle Yanky never knew where he would sleep or how many people would be packed into the rooms. The door was always open.

I watched as the children imagined the scene. They understood that no matter what, there was always space for these strangers, because really they were not strangers. They were our brothers and sisters. They were family.

“Uncle Yanky, can you describe the deportation from the ghetto?” I asked.

The children were riveted.

They heard what it was like to be tightly packed into cattle cars meant for animals, with no water, no bathrooms. No air to breathe. Nazis with their fierce German Shepards, shouting orders. Where are we going? What will be with us?

It was not too much for my grandchildren to hear. Do we not gather around our Seder table and speak of back-breaking slavery in Egypt? We are commanded to communicate to our children about the Jewish babies thrown into the Nile; the harshness, the rising evil of every generation who want to destroy us and throw us into the sea. Still today they seek to snuff the life out of us. We dip into salt water to remind us of our bitter tears. This is our story. It is our reality. And it is our responsibility as parents and grandparents to "tell your children”.

So no, I did not hold back, and I did not ask my dear uncle to withhold or protect. Our children must know. They need to understand what anti-Semitism looks like. They need to comprehend that there are those who are rabid and vicious, who detest us more than they love life itself.

They need to know how to stare this monster in the face and stand strong as loyal Jews. Whether facing those who are anti-Semitic or anti-Israel, our children will confront those who distort and destroy through their hatred. We must teach our children.

Because through it all, we have held onto to our faith. This is the key to our survival. Hearing and seeing this imprinted within these children’s souls that despite all the suffering we are still standing strong. A Jew never gives up. Our nation will never disappear. We are a nation born of miracles.

Even there, in the darkest abyss on earth, we refused to cower. We would not relinquish our light.

The children sat for three hours! They heard stories of Shabbat in Bergen Belsen. How my grandfather would keep hidden his moldy hard sliver of rationed bread and count the days till Shabbat. Then Friday night would come and my Zayda would gather my grandmother (whom we called Mama), my mother and my uncles around him. He would take out the moldy stale bread and ask them to close their eyes. “Imagine you are home again, tasting Mama’s homemade challah.” Zayda would sing Shalom Aleichem, welcoming the angels of Shabbat. Through his tears he explained that they, the children, were truly the angels of Shabbat.

Even there, in the darkest abyss on earth, we refused to cower. We would not relinquish our light.

As our time together came to a close, I asked Uncle Yanky to relay the story of his bar mitzvah in the D.P. Camp where the family was taken after the war ended. Awaiting visas but not being allowed to enter the Land of Israel, my grandparents and their children were stuck in a displaced person’s camp in Switzerland. After going through the indescribable suffering of the Holocaust, there was still no peace to be had. But my uncle was becoming a bar mitzvah.

“Children, do you know what we served at my bar mitzvah?”

My grandchildren waited to hear.

My uncle looked at them and said, “Water! There was nothing else.”

“Then my friends did something I will never forget. You see, staying in the D.P. camps, we children all became friends. They brought a huge box to me, as my present. I could not believe it! I opened the box and inside was another smaller box. Then another. And another. Until the smallest box came out. And you wouldn’t believe what was inside. A banana!”

“Yes,” my uncle continued. “A banana for my bar mitzvah present. I had never seen a banana before in my life so I started to eat the peel. One of the kids showed me what to do. I had no idea. And then I cut it into a hundred tiny pieces so everyone could share.”

We laughed together and said our goodbyes.

All the way home the children were filled with awe.

“Bubby, how strong is our Uncle Yanky! And I don’t mean muscles…you know what I mean Bubby?”

“I can’t believe it Bubby. A banana for a bar mitzvah!”

I had silent tears as I drove.

I do not know what our children will face in the future. The world is spinning beyond control.

We must teach our children well. My parent’s world, my uncle’s world was not so long ago. Yet we are once again confronting troubling hatred. It is masked but it is real.

Let us ignite the spark within our children’s soul. It is our sacred mission.

Talking to Your Kids About Divorce

My Son, The Artist

iPod's for Chanukah?
Chukat 5782: Let’s Play the Blame Game!
The Sin of Moses: The Two Ways to Communicate
In Aftermath of Chicago’s July 4th Shooting, Local Moms Provide Countless Points of Light
Comments
MOST POPULAR IN Family
Our privacy policy