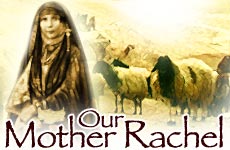 What is so special about Rachel that we commemorate her death more than any of the other matriarchs and patriarchs?

The 11th of Cheshvan marks the yahrzeit (day commemorating the death) of our matriarch, Rachel.

By learning more about who Rachel was, perhaps we can reach an understanding of why Jews make a point of commemorating her death more than any of the other matriarchs and patriarchs.

We first meet Rachel in Genesis, Ch. 29, when she is outside tending her father's sheep. In fact, her name "Rachel" means "a small sheep" in Hebrew. She seems to have a connection with this domestic animal of the fields. At the same time, the text mentions her physical appearance:

These facts gain significance when compared to the impression we have of her sister, Leah:

"And Leah's eyes were weak."

The name "Leah" means "tired" or "weary" in Hebrew. The Talmud tells us that Leah's eyes were soft and weakened by her incessant crying over the assumed destiny that she would marry the evil Esau, Jacob's twin brother.

Rachel seems to be at home in the outside world, beautiful to those who see her, realistic and adjustable, and taking part in the family's chores and livelihood. Leah, on the other hand, seems to have a darker, more complex personality. Her eyes, which represent "the window to the soul," bespeak a rare repudiation of her destiny, a weariness borne from her struggle to avoid the evil in the world at all costs.

Rachel, we might say, represents this world – the revealed aspects of this world and its inhabitants, whereas Leah may symbolize a hidden world – one that is not meant to behold the crude realities of this world, one that is revolted and disgusted by all that was represented by Esau.

(A deeper appreciation of Rachel's complex relationship with her sister Leah and the trials and tribulations of her life with Jacob are topics for an upcoming article.)

A MATCH MADE IN HEAVEN

Jacob immediately loved Rachel. Although it might seem that it was her external beauty to which he was immediately attracted, we may assume that our third and most complete patriarch saw more than that when he "fell in love."

The following quote from the Talmud tells us Rachel's most outstanding trait which must have given Jacob the green light to say "this one's for me":

"Jacob asked Rachel: "Will you marry me?" She said: "Yes, but you should know that my father's a trickster and he will outwit you." "And what is his trickery?" "I have a sister older than I and he will try to marry her off first." So he gave her signs (signals by which he would ensure the bride was Rachel). Come the night of the wedding and Rachel saw Leah being led to the chuppah. She thought: Now my sister will be humiliated? And she gave over the signs." (Talmud Megilla 13b)

By giving over these "signs," Rachel was basically allowing her sister, Leah, to marry Jacob instead of her. As far as Rachel knew, she may never wed Jacob at all. Indeed, even though she eventually did become a wife to Jacob, sharing him and her future with her older sister was not always a picnic! What drove Rachel to make such a selfless decision?

Rachel was driven to prevent her sister's humiliation even if it meant forsaking her own love and destiny.

Total, all-encompassing compassion. Rachel was incapable of tolerating the thought that her sister would be humiliated, and was driven to prevent it even if it meant forsaking her own love and destiny.

Rachel was to be the perfect match for Jacob. According to traditional and Kabbalistic sources, each of the patriarchs embody a primary trait that created the foundation of the Jewish people. Abraham, the first patriarch, is known for his chessed – lovingkindness whereas Isaac is known for the opposite trait of gevura – self-restraint.

Jacob's main character trait is emmet, truth. Jacob is the composite whole, the one who combines the essence of both extremes that were embodied by his father and grandfather. Thus he represents the trait of truth which is a composite of the whole picture.

As such, Jacob's mission is to find whatever truth the world has to offer and integrate it. It is Jacob who lives in a physical world and finds the holiness within it, even in exile, thereby sanctifying the world and using it for its true purpose. It is Jacob who transmits this ability to "gather the sparks" of truth in the world to the spiritual genes of the Jewish people.

This being his mission, he saw two components which were essential for their shared life and destiny. On the one hand, Rachel seemed easily adjustable to the physical world, beautiful of form and appearance, thus relatable and approachable to the world as well. More importantly, Jacob must have seen her tremendous compassion, perhaps through her treatment of the sheep in her care or through her relationships with the people around her.

Compassion enables one to see past himself, beyond his own selfish subjectivity and into someone else's reality, without judgment or resistance.

Compassion enables one to see past himself, beyond his own selfish subjectivity and into someone else's reality, with acceptance, without judgment or resistance. Thus Rachel is the perfect woman with whom Jacob could forge through life, finding the whole picture, the "emmet" in the world – using the positive elements available in the person or situation in order to enhance his understanding of the truth.

Together they would join to contribute the spiritual genes to us, the Jewish nation, from which we would obtain the ability to withstand the few thousand years of exile and gain a more full understanding of reality and truth therefrom.

"GOD IS YOUR SHADOW"

When Rachel died, Jacob buried her "on the way to Beit Lechem." Later, when explaining the choice of burial to their son, Joseph, he clarifies that this particular place was a very strategic spot for the quintessential "Jewish mother" – the boundless source of undeserving mercy and compassion.

"I didn't even take her into Beit Lechem itself which was in the land, and I know that you feel badly about this. But know that God told me to do this, so that she will be a help to her children. When Nevuzaradan, the King of Babylonia, will exile them and they will pass by her grave, Rachel will come out and cry, and beg God for mercy. God, in turn, will answer and respond to her: 'There is reward for your actions, so says the Lord, and your children will return to their borders.'" (Rashi, Genesis 48:8)

Only Rachel, who alone exhibited true mercy and selfless devotion to another, can demand and receive similar compassion from the Almighty:

When the Temple was destroyed and the Jews were being led into exile, Abraham came before God and said: "Master of the universe, when I was 100 years old you gave me a son and when he was 37 years old you told me: 'Raise him as a sacrifice before Me." And I was able to overcome my natural mercy and even tied him down myself. Will You not remember my devotion and have mercy on my children?"

Next came Isaac and said: "When my father said: 'God will show us the sheep for a sacrifice, my son," I did not hesitate and accepted my fate and even extended my neck to be slaughtered. Will You not remember my strength and have mercy on my children?"

Next came Jacob and said: "I worked for 20 years in the house of Laban and when I left, Esau came to harm me and I suffered all my life raising my children. Now they are being led like sheep to the slaughter in the hands of their enemies? Won't you remember all my pain and suffering and redeem my children?"

Next came Moses and said: "Wasn't I a loyal shepherd for Israel for 40 years? And I ran before them in the desert like a horse. And when the time came to enter Israel, You decreed that I would die in the desert. And now they go into exile - won't You listen to my crying over them?"

At that point Rachel, our matriarch, came before God and said: "Master of the universe, You know that Jacob loved me most and worked for my father for seven years in order to wed me. And when the time of my marriage came, my father switched my sister for me and I didn't begrudge my sister and I didn't let her be shamed. If I, who am only human, was not willing to humiliate my sister to get what I wanted, how could You – the eternal, living, compassionate God – envy idol-worship which has no true existence and cause my children to be exiled?!"

Immediately, God's mercy was awakened and He said: "For you, Rachel, I will bring Israel back to its place, as it is said: '...Do not cry and let your eyes not tear, for there is reward for your actions ... and there is hope for your end, and your children will return to their borders.' " (Introduction to Midrash on Lamentations)

On the 11th of Cheshvan, the anniversary of Rachel's death, we commemorate and try to learn from the intense compassion a human being can express towards another . A compassion that allows for the development of a true, objective perspective on life by seeing the positive sparks of holiness inherent in humanity and in the world. A compassion that does not question the deservedness of the recipient to receive mercy, but rather emulates God's boundless mercy, thus allowing God to respond in kind, showering us with compassion and ultimate redemption.

Clinging to Life
Is Grease the Word?
Dried Fruit Compote
Scientific Curiosity and the Divine Encounter
Comments
MOST POPULAR IN Family
Our privacy policy
Aish.com Is Looking for Great Writers