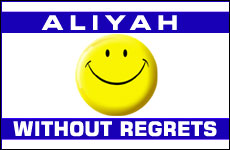 It's been nearly three months since we first landed on Israeli soil with our three children and ten suitcases. Three months of joyous discovery, rich experiences, and endless wonder. From all the doubts, pain, and confusion of the pre-aliyah process has emerged an exuberant feeling of coming home.

It wasn't easy to leave Cleveland. What would life in Israel be like? we wondered. How would our children adjust? Would the cultural differences be too much to bear? Questions like these reverberated in our minds even as we sold our possessions, said tearful good-byes to friends and family, and packed up our shipping container.

We hoped that our aliyah (ascending to Israel) would be a conduit to our family's spiritual growth, and from the looks of things, God is on our side. From the very moment we came, we have experienced outright miracles and abundant blessing. Our fears have been lifted, replaced with gratitude that we were given the courage to make the move despite our hesitations.

I worried about getting our lift, especially after friends had warned us that clearing our shipment meant anything from relatively minor hassles to major nightmares. Instead, we received our lift just three days after we arrived, without any difficulties whatsoever. Any doubts that Israeli service is not on par with American service were quickly laid to rest -- with one exception: the Jewish worker who had left the Port of Haifa at 5:00 am to bring our shipment apologetically explained that he hadn't had time to pray; he asked to borrow my husband's tefillin before he began unloading. Only in Israel, of course, and just one of hundreds of anecdotes that our family has noted thus far.

I was worried about the house we rented without ever having seen it. Instead, our house is beautiful. Leaving a four-story house in Cleveland, we were apprehensive about down-sizing -- now the worry has been replaced with genuine surprise that we ever opted to live on four floors, when two is so much easier.

I worried about the dire warnings regarding the meager job market. No problem -- God sent me a dream job, one that opens up new horizons for me and that is conveniently located right near my home.

I worried about the change from American products to Israeli ones. No problem -- my children now devour Osem ketchup with abandon.

I worried about lice. We've been through it twice and I'm happy to report that we are just fine.

I worried about medical care. Instead, we found caring doctors and a state-of-the-art healthcare system which takes a personal interest in new immigrants.

I worried about making new friends. Not a problem -- we didn't spend a single Shabbat meal at home for two months straight! My kids found playmates the very day we arrived.

I worried about security. Instead, my children delight in their freedom to play outside on our quiet cul-de-sac, while I am busy in the house, and I never think twice. A far cry from my anxiety about the kids playing alone outside back in Cleveland.

We have been accepted with open arms into a culture that is often very foreign to us.

I worried about the so-called black-and-white delineation of society here. Happily, we have seen nothing of the sort. We have been accepted with open arms into a culture that is often very foreign to us. Our children are being nearly smothered with signature Israeli warmth and love, and they're eating it up! They're already speaking Israeli-accented Hebrew among themselves, delighting in the discovery of a new language. My heart soars when I watch them play with their friends. There is such simplicity and innocence amongst these children. They are open and sincere; the girls hold hands and hug each other -- even at the ages of eight and nine. They take infinite pleasure in riding their bikes for hours on end, or playing with "sophisticated" toys like discarded tires and fallen palm fronds. They need no XBoxes or Disney movies to keep them happy.

I worried about the academic standards; now I find my worries not only unfounded, but laughable. My children are literally being stuffed with knowledge and creativity that is simply unsurpassed. My husband and I marvel at the strong education orientation that permeates Israeli society. After-school activities abound in all areas -- dance, gymnastics, music, and swimming to name just a few. Despite the fact that the school day is significantly shorter -- the kids begin at 8:15 and end at 1:15 -- there is an intense amount of learning that takes place.

I worried about living here without a car. Now I appreciate the fact that when you take taxis, flat tires and leaky gas lines are their problem (In Cleveland, the mechanic had been our best friend!).

There is no doubt that life in Israel is tinged with the dark clouds of strife. The Haifa train station my husband traveled through in order to release our shipment was destroyed by Hezbollah rockets just three days after he was there. Two weeks into our aliyah, my children were already playing "security guard" -- asking to check my backpack as I entered their "store."

When war broke out in Lebanon, we talked to the kids about it. No sense in trying to hide it when their friends were all discussing it with the sage wisdom of seven-year-olds going on 50. We prayed, we sent food to the displaced families from the North, and we went about our lives as best as we could. It's a different dimension of existence, but we are all in this together, and that's no small comfort.

There is no joy like the utter joy of living in Israel, where the streets reverberate with tangible spirituality and genuine Jewish experience.

We have found that living in Israel has brought a beautiful sense of bonding and serenity to our family in general. Both my husband and I have found ourselves spending significantly more time bonding with our kids than we ever were able to in America. We feel connected and united in the big move we made, and the new life we've built, and none of us has any regrets. Our children have become so relaxed and independent. Whether it's walking home from school together, or taking ambling walks through the streets, our kids really feel the beauty of living here. They have integrated seamlessly into Israeli life -- beyond our wildest dreams -- and we chalk it up to just one aspect of the Divine kindness which has guided us in this venture from the very start.

There is no joy like the utter joy of living in Israel, where the streets reverberate with tangible spirituality and genuine Jewish experience. Jewish life is satisfyingly real here.

The heavy emphasis on spiritual growth here is impacting our lives in tangible ways. My husband is able to devote his entire mornings to Torah study -- an opportunity he never dreamed of in America, where his job consumed his every free moment.

On one of the intermediate days of Sukkot, our family took a spontaneous hike in the mountains surrounding our neighborhood. There we found ancient mikvas, ritual baths, hewn out of stone and the crumbled remnants of cities where our ancestors once lived. This is our back yard! I am still awestruck at the fact that we can simply hop on a bus and visit the Western Wall -- the holiest place on earth. In Israel, I am home.

It's been three months, and I'm still euphoric. I love the people, the weather and the breathtaking views. Even the produce tastes sweeter. We feel overwhelmingly privileged to have been given the strength and courage to grab the opportunity that is available to all Jews today. In fact, I get goose bumps just thinking that last year on Passover we sang "Next year in Jerusalem."

And just look at us -- here we are. What are you waiting for?