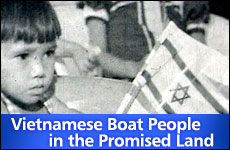 Memories of Holocaust refugees, but with a different ending.

Since 1948, Israel has provided a home for millions of Jewish refugees from around the world – Morocco, Iraq, the former Soviet Union, Ethiopia.

What is not so well-known, however, is that Israel has also taken in and sheltered persecuted non-Jews seeking asylum from war-torn countries in the Balkans and most recently, Southern Sudan. A fascinating but little-known story is that of the “Vietnamese Boat People.”

In the late 1970s, after decades of civil war, the North Vietnamese totalitarian communists defeated the South Vietnam regime. In the aftermath of this Vietnam War and the fall of Saigon, hundreds of thousands became refugees. An estimated one million people were imprisoned without formal charges or trials. The new communist government sent masses to “re-education camps” which – rife with abuse, torture and executions – is where 165,000 people died.

Meanwhile, 145,000 South Vietnamese were brought to the United States. For the rest – hoping to escape Communist persecution and torture – there was no choice but to perilously attempt escape by sea.

The sea raged with ferocious waves and Thai pirates.

The risks were huge. The refugees had creaky, wooden boats, overloaded with human cargo. There was the constant surveillance of Communist patrol boats. The sea raged with ferocious waves and crawled with savage Thai pirates.

Despite the risks, hundreds of thousands fled. Many had no experience on the rough seas and were blown off course. Many suffered at the hands of pirates who robbed, raped and killed the passengers. Others tragically drowned in storms, by dehydration and disease, or other ocean mishaps.

The people know there is no going back. Either they will make it, or die somewhere in the immense and unforgiving sea... There is no sight of land, nothing except the rumbling sky, the quivering winds, and the trembling heartbeats; the people are crying for help. Soon, they run out of food, raw fish have become their main source of nourishment, but even that is rare... Even their clothes are wet, and they have had to sleep through the coldest nights. Their spirits and strength are greatly diminished. Why is freedom so hard to find? If not in the vast ocean, then where is it?

For one fragile fishing boat crammed with 66 refugees, a miracle was about to occur. Adrift in the South China Sea for nearly a week, they were lost. Their little boat was leaking and waterlogged. They were without food and water, and their clothes had been shredded by the high winds. Ship after ship – from East Germany, Norway, Japan and Panama – passed them by, ignoring their desperate SOS signals, in violation of the most basic code of the sea.

Then on June 10, 1977, an Israeli freighter ship called the Yuvali, en route to Taiwan, sighted the nearly naked passengers. Captain Meir Tadmor telegraphed Haifa for permission to take them aboard, even though his ship carried only enough life rafts and jackets for his 30-member crew. Still, he had no choice but to pick up the refugees, he said, because "they are poor in body and morale."

Captain Tadmor plucked the refugees from their rickety boat 400 kilometers south of Saigon. The refugees – doctors, professors, bankers, nurses, fishermen, and 16 children under age ten – hadn't had anything to eat or drink for days.

Yet the Yuvali found no port willing to accept its surplus “cargo.” Captain Tadmor made an unscheduled stop in Hong Kong to get the refugees desperately-needed medical attention; authorities in the British crown colony refused to allow them ashore on the grounds that the Yuvali was not scheduled to call at Hong Kong. Equally inhospitable were authorities in Taiwan: they put a police cordon around the ship to prevent anyone from getting off. The refugees received a similarly cold reception at Yokohama, Japan. 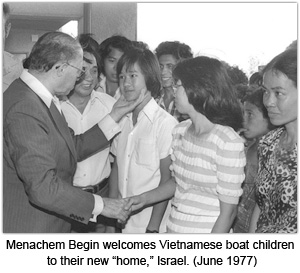 The rebuff awakened some poignant memories in Israel. Ships carrying Jewish refugees from the Nazi Holocaust sought in vain to enter ports in the Mediterranean, the Black Sea and the Caribbean. They wandered the seven seas looking for a haven and were summarily turned away. Some, like the SS Struma, were abandoned without food, water and fuel – then torpedoed and sunk by a Soviet submarine, killing 768 men, women and children.

And so, Menachem Begin’s first act as Israel's new prime minister was to offer asylum and resettlement to the 66 Vietnamese. Only then did Taiwan allow the group to disembark, where they were whisked to Sung Shan Airport for a flight to Israel.

"We never have forgotten the boat with 900 Jews [the St. Louis], having left Germany in the last weeks before the Second World War... traveling from harbor to harbor, from country to country, crying out for refuge. They were refused... Therefore it was natural… to give those people a haven in the land of Israel."

The government of Israel offered a ceremonious welcome, with Minister of Absorption David Levy uttering some words of rebuke to the rest of the world: "Let them do as we have. May they lend a hand to save women and children who are in the heart of the sea without a homeland, and lead them to safe shores."

Where are they today?

Many of the Vietnamese refugees eventually left Israel, seeking life in more familiar surroundings. They left not out of disappointment and frustration, but as grateful emigrants.

Others have remained, forming the core today of a thriving Vietnamese community in Israel. Kien Wong lives in Haifa, has a growing multi-generational family, and owns Yan Yan, a popular Chinese restaurant. (see film clip below)

Another of the refugees, Hanmoi Nguyen, who has raised five Hebrew-speaking daughters in Israel, is featured in the documentary film, The Journey of Vaan Nguyen. Nguyen had been the son of a wealthy landowner in Vietnam and returned to his native village to reclaim his ancestral property and settle scores with the Communist functionary who kicked him out at gunpoint. In an eerie parallel to the Holocaust survivors who returned to their homelands to reclaim their old homes, Nguyen is met with suspicion and hostility at his old village.

This summer marks the 25th anniversary of this unique rescue story. The Talmud says that saving one life is like saving a whole world. In this case, in those stormy seas south of Saigon, 66 precious souls were given a new lease on life.

My Response to Terror

My First War: The Aliyah Chronicles #6
Why the Mezuzah is Placed on a Slant
Faith: the Axis Upon Which the Wheel of Science Turns
Love - Not Just About Chemicals Anymore!
Comments
MOST POPULAR IN Israel
Our privacy policy