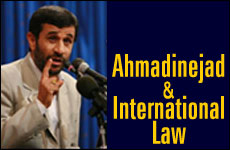 Three important lessons from the Theater of the Absurd.

Iranian President Mahmoud Ahmadinejad's recent visit to the United States and the UN was no less than a three-act play in the Theater of the Absurd. While it has been argued that his command performances at the UN, Columbia University and in the media further exposed his absurdity, critics need to look behind and beyond the on-stage theatrics, lest we ignore the depth of his regime's criminality and the suffering of the Iranian people.

Now that the curtain has fallen, the question becomes: What are the lessons to be learned and actions to be taken?

Arguably, there are three lessons to be learned, each corresponding with the acts in the Theater of the Absurd, and each with a lesson anchored in the rule of law; more particularly, in the disregard of the rule of law.

Ahmadinejad should have been declared an inadmissible person and placed on the "United States' Watchlist" of persons barred from entering the country.

First, President Ahmadinejad should have been declared an inadmissible person and placed on the "United States' Watchlist" of persons barred from entering the country. For American law excludes from entry any person who has engaged in, or incited to, terrorist activity, or who "has used his position of prominence to endorse or espouse terrorist activity in a way that undermines United States' efforts to reduce or eliminate terrorist activities."

The evidence of Iran's complicity in terrorist activity is clear and compelling. Ahmadinejad's Iran has recruited, trained, financed, instigated and armed its terrorist proxies such as Hamas, Hizbullah and Islamic Jihad, whose platforms and policies are replete with genocidal calls and terrorist activity that outdo even its Iranian patron.

Moreover, Ahmadinejad is in standing violation of the Genocide Conventions prohibition against the "direct and public incitement to genocide," which alone should be cause for exclusion. If it be argued that no precedent exists for excluding an sitting president, it should be recalled that Austrian president Kurt Waldheim was placed on the "US Watchlist" for his participation in the persecution of civilian populations during the Second World War.

The second act in this Theater of the Absurd was the invitation extended to Ahmadinejad to address Columbia University. This was not a matter of academic freedom. Columbia was not obliged to give Ahmadinejad a podium; rather, given his criminality, it was obliged not to give him a podium. Nor was this a matter of "free speech;" incitement to commit genocide is not protected speech. Indeed, it is a violation of international criminal law - including not only the Genocide Conventions but the International Criminal Court Treaty.

In fact, the best evidence for not inviting Ahmadinejad to Columbia was set forth in the "introduction" by Columbia's President Lee Bollinger of Ahmadinejad , which was more indictment than introduction, and appeared more as an exculpatory disclaimer -- however discourteous -- for the wrongful judgment to invite Ahmadinejad to begin with.

Further, the "justification" offered for the invitation by Columbia University Dean John Coatsworth - that he would have given Hitler a platform -- was devoid of any moral compass.

Third, and most disturbing, Ahmadinejad should not have been a welcome guest at the United Nations General Assembly. He should have been -- and should be -- the object of a criminal indictment, the elements for which can be found in Lee Bollinger's own introduction.

A person who incites to genocide and is complicit in crimes against humanity belongs in the dock of the accused, rather than the podium of the UN General Assembly.

A person who incites to genocide; who is complicit in crimes against humanity; who continues the pursuit of the most destructive of weaponry in violation of UN Security Council Resolutions; who warns Muslims who support Israel that they will "burn in the umma of Islam;" who is engaged in a massive repression of human rights in Iran; who assaults the basic tenents of the UN Charter -- such a person belongs in the dock of the accused, rather than the podium of the UN General Assembly.

But it is not enough to lament what occurred in this Theater of the Absurd, or even to learn its lessons. It is important to act on those lessons so as to restore respect for the rule of law and the Responsibility to Protect doctrine, fidelity to the UN Charter, and the struggle against impunity. Accordingly, the following actions should be undertaken with all deliberate speed:

State parties to the Genocide Convention, such as Canada, have not only a right, but a responsibility, to enforce the convention, particularly as regards the prevention of genocide.

State parties should therefore refer the criminal incitement to genocide by President Ahmadinejad and other Iranian leaders to the appropriate UN agencies. It is astonishing that this criminal incitement has yet to be addressed by the UN Security Council, the UN General Assembly, or any other body or agency of the United Nations, though it has found fit to give him a podium.

State parties should initiate, in the International Court of Justice, an inter-state complaint against Iran - for its "direct and public incitement to genocide" in violation of the Genocide Convention, to which Iran is party.

The crimes of President Ahmadinejad and other Iranian leaders should be referred by the UN Security Council to the special prosecutor of the International Criminal Court for investigation and prosecution.

State parties should prepare criminal indictments of President Ahmadinejad, former president Rafsanjani, and other Iranian leaders on the basis of the "Universal Jurisdiction" principle embodied in the Genocide Convention.

The UN Secretary General should refer President Ahmadinejad and other Iranian leaders to the UN Security Council, on the basis of their threats to international peace and security, pursuant to Article 99 of the UN Charter.

President Ahmadinejad and other designated Iranian leaders should be placed on a "watchlist" by concerned countries, preventing their entrance as "inadmissible persons." There is presently discussion about holding Iran accountable for its defiance of UN Security Council resolutions calling for the suspension of its uranium-enrichment process. The recommended options have included everything from UN sanctions to possible military strikes. It is time that the above juridical options was initiated, which might also embolden progressive forces within Iran while holding the responsible individuals accountable.

Indeed, recent history has taught us that sustained international juridical remedies can bring about the indictment of seemingly immune dictators, such as Slobodan Milosevic and Augusto Pinochet, and such actions are clearly preferable to military options.

This is an opportunity for countries such as the United States and Canada to exercise necessary leadership in regard to one of the most important threats confronting the international community today. 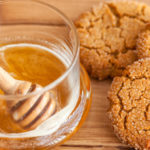 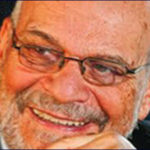 The People of Israel4 min read