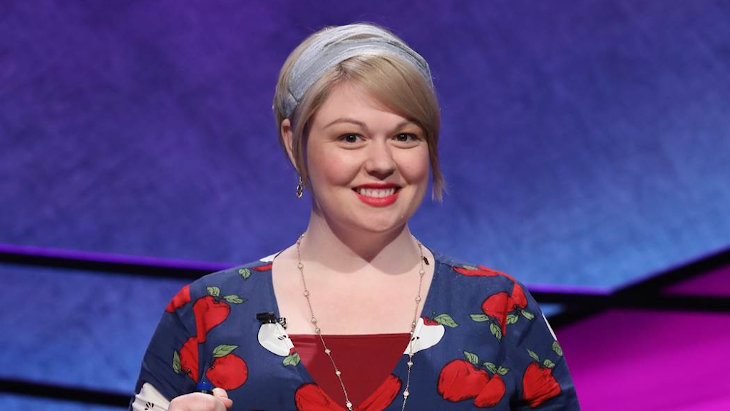 Meggie Kwait competed on the game show as a proud observant Jew.

When Meggie Kwait won big on a recent episode of Jeopardy, there were a few hints that the bubbly New York City teacher was Jewish. There was the wager she placed in the semifinal round – $18 – and the gauzy scarf covering her hair.

The $18 Meggie bet reflected the importance of the number 18 in Jewish thought: Hebrew letters can be used to express numerical values, and the Hebrew word chai (life) has a value of 18. Some Jews choose to donate to charity or to give monetary gifts in multiples of 18 as a way to wish people a long life.

“By my semifinal game, I’d built up a substantial lead,” Meggie explained in a recent Aish.com interview; “so long as I didn’t do something silly like bet all my money (and lose), I knew I would go to the finals…. I didn’t want to wager nothing, so I decided to give a nod and wink to all the Jewish viewers who were watching and bet chai." Meggie lost that particular round but went on to the finals and eventually won $50,000 on Jeopardy's special teacher’s tournament.

Some Jewish viewers might have already recognized Meggie as a religiously observant Jew for another reason: the scarf she routinely wears in her hair, like many married Jewish women. “I do cover my hair” she explains: “I wear something on my head every day in public.”

Both Meggie and her husband Derek have had religious journeys that brought them to this point in their lives as observant Jews. Derek grew up in a largely secular Jewish home and became more observant as an adult. Today he regularly wears a kippah. For Meggie, her path to an Orthodox Jewish lifestyle was more circuitous.

She grew up in a non-Jewish family in northern California and felt drawn to Judaism since she was very young. Her mother jokes that Meggie came home from preschool one day and announced she wanted to be Jewish. Her interest deepened as she grew older. By the time she got to college, she knew she was ready to learn more and started frequenting Hillel and learning all she could about living a Jewish life. 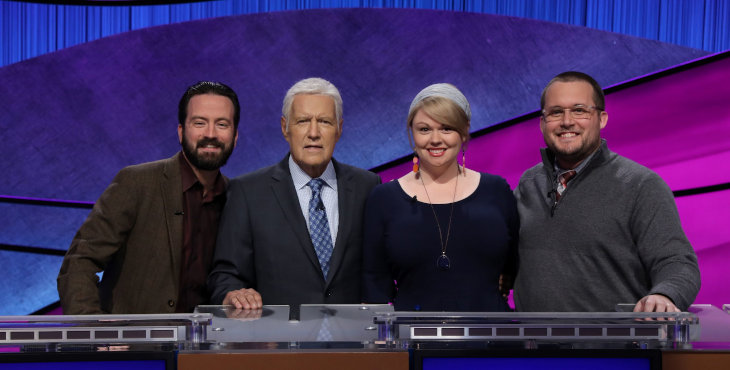 Meggie initially converted to Judaism when she was still in her teens, then had a second Orthodox conversion later as an adult. Years later, after Meggie and Derek met at a Shemini Atzeret holiday lunch, Meggie knew that she wanted to cover her hair as a married woman. “We talked about covering before we got married,” she recalls. “He said it’s up to me – it’s my mitzvah, however I want to fulfill it, it’s fine by him. I also like the fact that it isn't only the man who is readily identifiable as a Jew.”

“It’s a meaningful but sometimes challenging mitzvah for me – it’s really public.”

“I don’t remember watching Jeopardy growing up,” Meggie recalls. Derek suggested they watch it together and was impressed at the way Meggie could answer so many of the questions. He suggested that she try out for the show. Meggie took an online quiz, then was invited to Boston to play a practice game. A year later, she received a phone call asking her to participate in a special teacher’s tournament.

The show wanted to fly her out on a Saturday; after Meggie explained that she couldn’t fly on Shabbat, they agreed to let her come in on Sunday. She wondered if they would mind that she planned to appear on national television with a scarf on her head, and they said that was okay too. They’d had religiously observant Jews on the show before, and were happy to accommodate her requests.

Meggie says appearing on the show was a wonderful experience. She bonded with the other teacher contestants and they still keep in touch. Filming concluded in March 2020, just before coronavirus closed down much of the US, including the Jewish day school where Meggie works. Having virtual meetings with the friends she made on Jeopardy each week has helped her cope with the stresses of teaching online.

Since the show aired, Meggie has had lots of feedback about her overtly Jewish appearance, both encouraging and insulting. Some people made nasty comments online about the scarf she wore in her hair. “People can be cruel on the internet,” she observes, recalling one poster called her hair-covering "a rag”. At times, Meggie added to online discussions, explaining that covering her hair is a mitzvah and is very important to her. “I think it’s nice when you get to explain why your dress says something about your values in life,” she notes. 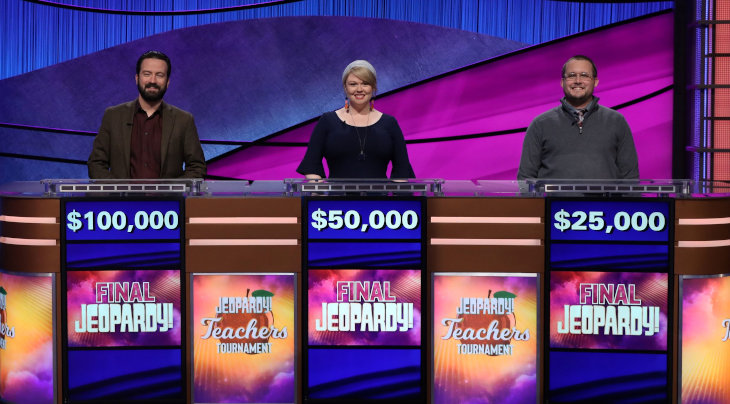 Other people stuck up for her in online discussions, writing that they liked Meggie’s scarf and that it fit her overall style, and defending her sense of fashion. And many have reached out to her, telling her how good it felt to see a religious Jewish woman on tv.

One viewer wrote to Meggie that they watched the show with their father, who is a Holocaust survivor, and he was so happy to see a Jewish woman come in second place in the tournament. Another viewer contacted Meggie to tell her how much they loved being Jewish and how great it felt to see a fellow Jew on television. Others told her that they felt that she was representing them as a Jew. “That’s been really special,” she explains.

“I always think back to when I was in college and my rabbi said it was really important to him to be gracious and generous because he walks around wearing a kippah,” Meggie recalls. He was a lovely man who often helped others, and she feels that people who saw him often thought “he’s a positive light in the world, and it must be his Judaism that informs his positive actions…” Today Meggie finds herself in a similar position. With her very identifiably Jewish appearance, she realizes she might be the only religious Jewish woman some people will ever interact with. "That’s a privilege and a serious responsibility and something I try to live up to.”

Fidel Castro and the Jews
The Softball Player
How This 6 Generation Bread Baker Brought Back Israel’s Ancient Grains
Olivia Newton John’s Grandfather was a Nobel-Prize Winning Jewish Physicist
Comments
MOST POPULAR IN Israel
Our privacy policy
Aish.com Is Looking for Great Writers