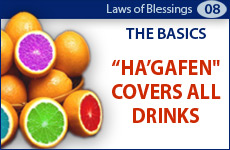 Two key conditions for Ha'gafen to cover other beverages.

In the previous class we learned about the special bracha on wine, "borei pri ha'gafen." 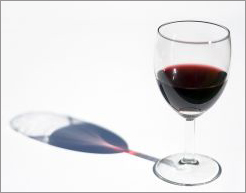 Additionally, because of this unique status, the bracha on wine "covers" other beverages that you are drinking at the same time.1 Therefore, if you had a glass of wine and a soft drink with dinner, you would only say Ha'gafen on the wine, but no bracha on the other drink.

This rule that Ha'gafen covers all other beverages, is subject to two conditions:

We will now explain these two conditions in more detail.

Condition #1: Other Drinks in Front of You

If you said Ha'gafen intending only to drink wine, and then later decided to have another drink, that second drink requires its own Shehakol.

There are two exceptions to this rule: 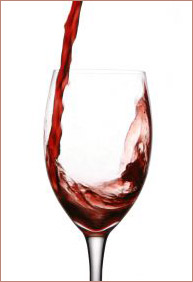 When you are invited to eat at someone else's home, you don't know what will be served. Therefore, your brachot are assumed to have been said with an all-inclusive intention.5 Consequently, Ha'gafen made by a guest covers any drinks that the host subsequently brings out.

In a home where one person prepares and serves the food, this rule applies to the other members of the household, since the standard intent when they say a bracha is that it will "cover" whatever is served to them.6 (Of course, this would not apply to the person who prepared the food.)7

In the middle of dinner, Linda brought out a pitcher of lemonade from the fridge. Her husband drank some without a bracha, but was surprised to hear her say Shehakol after pouring herself a glass. "Didn't we say Ha'gafen on the wine already?" he asked. "Yes," she replied, "but at the time I didn't think that I was going to have lemonade."

If you sat down explicitly to have a few drinks of wine, then the initial Ha'gafen also covers drinks that will be brought out later.

This will only apply, however, if some of the original wine still remains when you decide to bring the new drinks out.8

As we learned, it is because of the superior status of wine that its bracha covers other drinks as well. Therefore, according to some opinions, this rule only applies when wine is consumed in a fashion that reflects its importance – i.e. when the wine is consumed in a halachic act of "drinking":

The minimum amount is a Talmudic measurement called melo lugmav (lit: "a cheekful"). Although opinions vary, for our discussion the consensus is that 2 fluid ounces (approx. 59 cc) is sufficient.9 The wine should additionally be drunk at once (in the time it normally takes to drink 3 ounces of wine). If it was drunk in a longer period, so long as less than 9 minutes passed from start to finish, it covers the other drinks.10

Consequently, if you are drinking less than 2 ounces of wine, it is questionable whether the bracha Ha'gafen covers other drinks or not. In such a case, you should say Shehakol on some food before partaking of other drinks. Another solution would be to ask someone else who is saying Shehakol to have you in mind when saying his bracha.11 This works according to the principle of shomeya k'oneh -- that listening is as reciting -- which we will learn about in class #38. 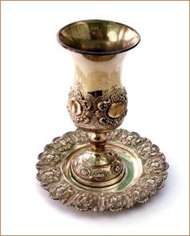 On Shabbat morning, three men sat down to enjoy Kiddush together. Mr-A recited the Kiddush, with the bracha Ha'gafen, and drank the cup of wine. Mr-B did not drink any wine at all, while Mr-C took a sip of the wine. Now they all want to drink some water. Who needs to say a bracha?

At this point in the course, we have completed the brachot Ha'aitz, Ha'adama, Shehakol, and Ha'gafen. Let's quickly review the principles that we've learned so far.

Class #6: When Produce Loses its bracha

This concludes the eighth class on Hilchot Brachot. In the coming lessons we will learn about the brachot Mezonot and Hamotzee

4. Eating without a Bracha?!6 min read 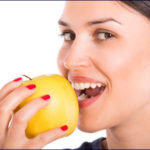